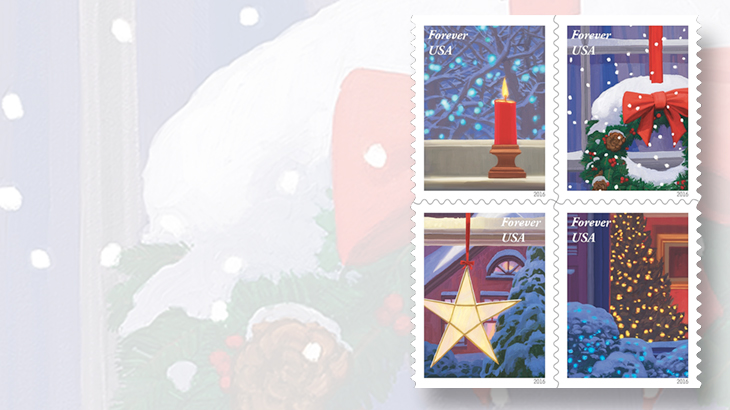 The Holiday Window Views forever stamps will be issued by the United States Postal Service in October.

The United States 2016 holiday stamp line-up has increased by four, as the Postal Service has revealed the designs for four new forever stamps with a wintry theme.

“Portraying winter nights, these elegant stamps showcase ways we observe traditions and spread cheer, letting us delight in the snow when we’re inside while also sharing our warmth and merriment with the outside world,” the Postal Service said in a July 25 press release.

“Two of the designs show views from the inside looking out: a single burning candle sits on a sill and a simple star ornament hangs from a hook attached to the window sash, out of sight.

“Two other designs show views from the outside looking in: a brightly lit Christmas tree contrasts with the snowy shrubs on the other side of the glass and a snow-covered wreath hangs in front of frosted windowpanes.”

The stamps will be issued in October, according to the Postal Service, adding that additional details will be announced soon.

“This is one of a number of holiday-themed stamps that will be issued this year,” the Postal Service noted.

All of the stamps are expected in early October, and it is likely that some or all of them will be issued during the American Stamp Dealers Association’s New York Fall Postage Stamp Show, taking place Oct. 6-9 at the Hilton, 1335 Avenue of the Americas, in New York City.