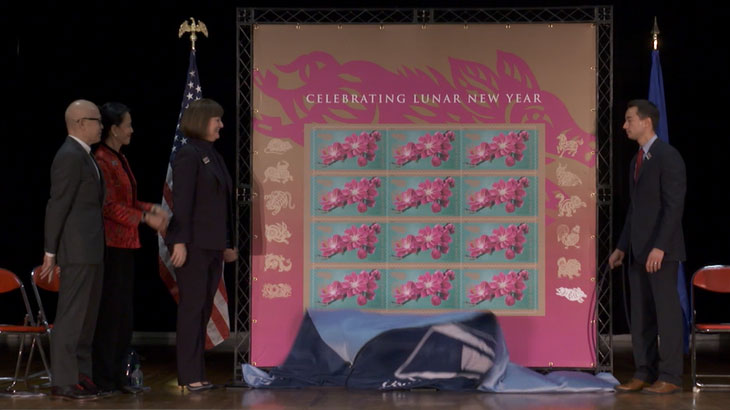 The Year of the Boar commemorative forever stamp was unveiled Jan. 17 at the Chinese Community Center in Houston, Texas. Screen capture from U.S. Postal Service video.

USPS vice president of finance and planning Luke Grossmann was on hand to introduce the Year of the Boar stamp, the final stamp in a series that began in 2008.

“The traditions of the lunar new year are tied to the faces of the moon, and the 12 creatures of the Chinese zodiac,” Grossman said. “People are said to share the trait of the animal for that year. Individuals born during the year of the boar are believed to be generous, compassionate and warm-hearted; they tend to be diligent and focused; they also like to finish what they started.”

Y. Ping Sun, an official university representative at Houston’s Rice University, joined Grossmann at the ceremony. Sun is wife of the university’s president and is beloved on campus. She commended the U.S. Postal Service for celebrating diversity through these stamps, and provided background on the year of the boar.

Sun also urged attendees to purchase many stamps after the ceremony.

"The more stamps you buy, the more prosperous you will be," she said, smiling.

As with the previous 11 stamps in the Celebrating Lunar New Year series, the central artwork features a painting by New York-based artist Kam Mak. The year of the boar’s illustration shows purple peach blossoms on a branch against a pale green background. The Postal Service reports that peach trees in China typically bloom in February, “just in time for the new year.” The upcoming year of the boar will begin Feb. 5 and end Jan. 24, 2020.

Mak was present at the ceremony and explained that marking the end of the series was “bittersweet.”

“I hope that I was successful in highlighting the beautiful traditions of how we celebrate the lunar new year,” he said.