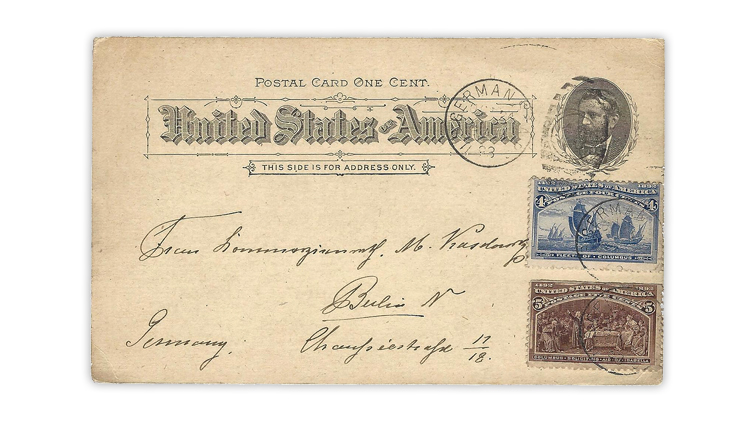 In Classic U.S. Postal History in the Dec. 20 issue of Linn’s Stamp News, Labron Harris focuses on the U.S. 1891 1¢ Grant postal card and its use to foreign Universal Postal Union addresses. He explains why the card shown here required an additional 9¢ postage.

The Dec. 20 monthly issue of Linn’s Stamp News just landed on the presses and goes in the mail to subscribers Monday, Dec. 6. And if you subscribe to Linn’s digital edition, you’re at the head of the line with early access Saturday, Dec. 4. While you wait for your issue to arrive in your mailbox, enjoy these three quick glimpses of exclusive content available only to subscribers.

The larger size of the United States 1891 1¢ Grant postal card meant that 5¢ postage was required if sent to a foreign Universal Postal Union address. Labron Harris, in Classic U.S. Postal History, showcases three examples of the card that were sent to international destinations. Two of the three cards, both of which were mailed to Germany, were properly paid, while the third required the payment of postage due upon its arrival in England. Read the entire column to learn how Harris and Linn’s Spotlight on Philately columnist Ken Lawrence are connected to the 1¢ Grant postal card illustrated here.

Speaking of Spotlight on Philately, Ken Lawrence continues his in-depth review of airmail covers carried a aboard Pan American Airways flying boats. His article published in the Oct. 19, 2015, issue of Linn’s looked at letters carried on Pan Am Clipper flights prior to and up to Dec. 7, 1941. The present column “picks up the story from my 2015 narrative and extends it to include flights for the rest of December 1941,” Lawrence explains. He illustrates seven representative covers to tell this gripping story. Included with the column is a table summarizing the Foreign Air Mail route No. 14 trans-Pacific airmail flights that were flown Dec. 7-31, 1941. If you have an interest in this area of World War II postal history, be sure to save this column for future reference.

In keeping with the holiday season, you’ll want to take a look at the last feature in the issue: a colorful display of 10 worldwide stamps featuring various aspects of Christmas shopping. A U.S. 1996 32¢ Christmas stamp, for example, features Julia Talcott’s charming illustration of a mother and daughter shopping. Also pictured are stamps from Belgium, Spanish Andorra, Malta, Luxembourg, Austria, Bahamas, Norway and Sweden. The Swedish stamp shows a Christmas market and was engraved by none other than Czeslaw Slania (1921-2005).