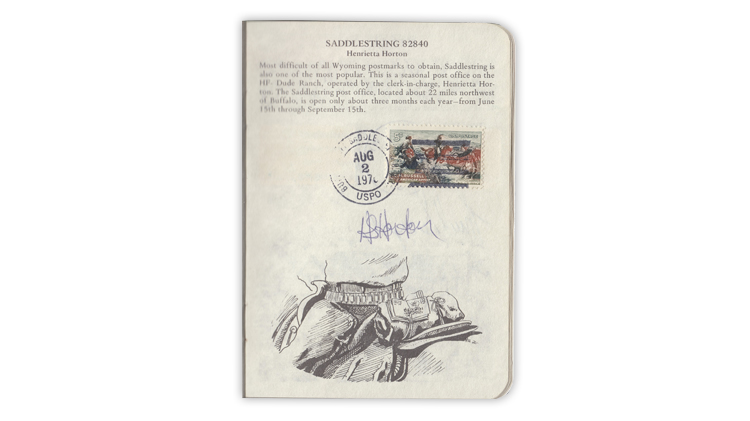 In the Oct. 10 issue of Linn’s Stamp News, The Odd Lot columnist Wayne L. Youngblood showcases an unusual passport created by the Wyoming Bicentennial Commission. Shown is a page from the passport Youngblood recently acquired.

The Oct. 10 issue of Linn’s Stamp News just landed on the presses and goes in the mail to subscribers Monday, Sept. 26. And if you subscribe to Linn’s digital edition, you’re at the head of the line with early access Saturday, Sept. 24. While you wait for your issue to arrive in your mailbox, enjoy these three quick glimpses of exclusive content available only to subscribers.

Wyoming’s unusual passport for the 1976 Bicentennial

In The Odd Lot, Wayne L. Youngblood digs into the origins of a 1976 Bicentennial item that he recently found. He writes that the item “was a complete mystery to me and shows no readily apparent philatelic involvement.” According to Youngblood, the item is a passport “titled A Bicentennial Passport To Wyoming produced by the Wyoming Bicentennial Commission in 1976.” Sixty-four of the passport’s 68 pages are short profiles of specific Wyoming post offices, and, as can be seen here, each “post office page has a space to affix stamps and receive a postmark,” Youngblood writes. Youngblood discovered more fascinating tidbits about the passport, so be sure to read his entire column.

In each weekly issue of Linn’s, either E. Rawolik VI or E. Rawolik VII dissects the contents of a stamp mixture offered to collectors. E. Rawolik is a pseudonym that is also the word “kiloware” (a stamp mixture) spelled backward. This week, E. Rawolik VI explores a one-fourth sample from an assortment of 200 used United States stamps, most of which were valued at the Scott catalog minimum of 25¢. “The earliest stamp was the 1893 2¢ Landing of Columbus (Scott 231) in the Columbian Exposition issue. The most recent was the 15¢ Ski Jump (1797) from a set commemorating the 13th Winter Olympic Games in Lake Placid, N.Y.,” Rawolik writes. Enjoy the full review in this issue.