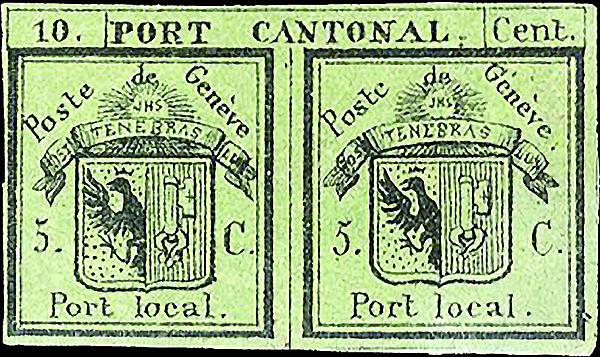 A rare unused Double Geneva of 1843, from the third oldest European stamp issue, brought $34,500 at the March Cherrystone sale. 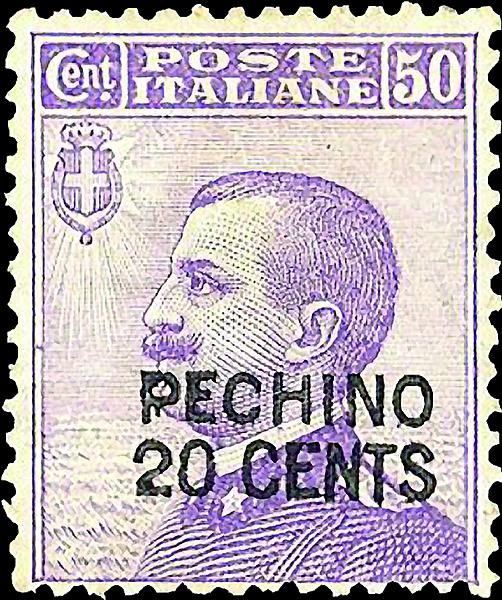 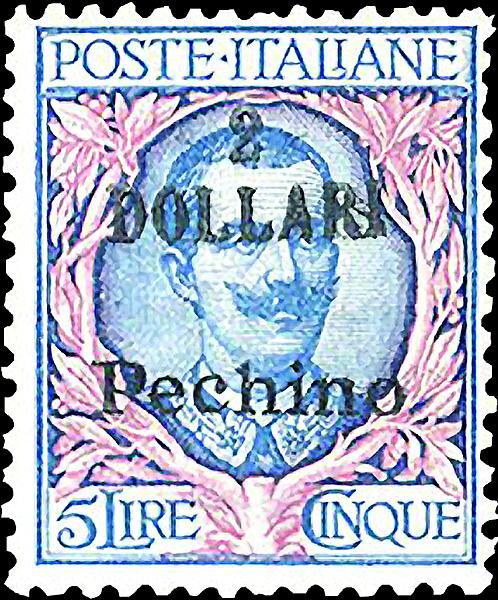 This Italian Offices Abroad, Peking, issue from 1918-19 has an error: the currency “DOLLARI” in all capital letters. Cherrystone Auctions sold the stamp for $37,375 in March.

Cherrystone Auctions held a sale of worldwide stamps and postal history March 17-18. The high realization went to a $2 stamp of the Italian Offices in China at Peking (now Beijing).

Italy, like many foreign powers in the early 20th century, maintained post offices in Peking and in the foreign-concession area of Tientsin (also known as Tianjin), for which it issued stamps overprinted “Pechino” or “Tientsin,” respectively, from 1917 to 1922.

Most of the $2-on-5-lire blue-and-rose Victor Emmanuel III stamps have the word “dollari” in lowercase letters, but  some 15 are known with “DOLLARI” in all capital letters (Italian Offices Abroad, Peking, Scott 30a).

The example in the Cherrystone sale, lightly hinged and moderately well-centered for its kind, sold for $37,375, including the 15 percent buyer’s premium Cherrystone adds to all lots.

An unusual early stamp from Geneva, Switzerland, that is really two stamps in one, was offered in a scarce unused example by Cherrystone.

The so-called Double Geneva of 1843 is actually the third-oldest stamp issue of Europe, after Great Britain’s Penny Black, Penny Red and Two-Penny Blues of 1840-41 and Zurich’s Numeral 4 and 6 issue of earlier in 1843. (The Swiss city of Basel would issue its famous Dove stamp in 1845.)

Printed in black on yellow-green paper, the Double Geneva (Scott 2L1) design comprises twin coats of arms, each surrounded by the words “Poste de Geneve/5 C/Port local” within a square. The two squares are topped by a cartouche with the words “10/Port Cantonal/Cent” straddling the pair.

At the time, Switzerland was made up of 22 sovereign cantons, with 17 independent local postal services and dozens of different currencies. It would not issue its first stamps as a unified confederation until 1850.

The Double Geneva in the Cherrystone sale showed good margins, although experts’ opinions varied as to the shade of color and status of the gum on the back. Nonetheless, it fetched $34,500.

Further in the Cherrystone sale, a beautiful set of three trial color proofs of a Russian 5-kopeck stamp honoring a 1933 stratospheric balloon ascent showed the delicate design in hues of indigo, ultramarine and brown.

A set of three trial color proofs of a 1933 Russian stamp marking a balloon ascent rose to $16,100 in the March auction by Cherrystone.

In the early 1930s, the Soviet air force was intrigued by the idea of high-altitude flight and was seeking a way to demonstrate its technical prowess.

A special hydrogen-filled balloon was built, the CCCP-1 (USSR-1), and after some initial trouble, on Sept. 30, 1933, the craft with its three-man crew attained an unofficial record altitude of 19,000 meters (about 60,700 feet), before returning safely to earth.

A set of three stamps marking the achievement was issued later that year. The 5k stamp was issued in ultramarine, together with a 10k carmine and 20k violet of the same design (Scott C37-39) The ghostly balloon is shown rising into the darkness of space, with a minuscule Kremlin at the bottom of the design.

The three imperforate, gummed proofs on watermarked stamp paper, each either lightly hinged or with a hinge remnant, sold for $16,100.