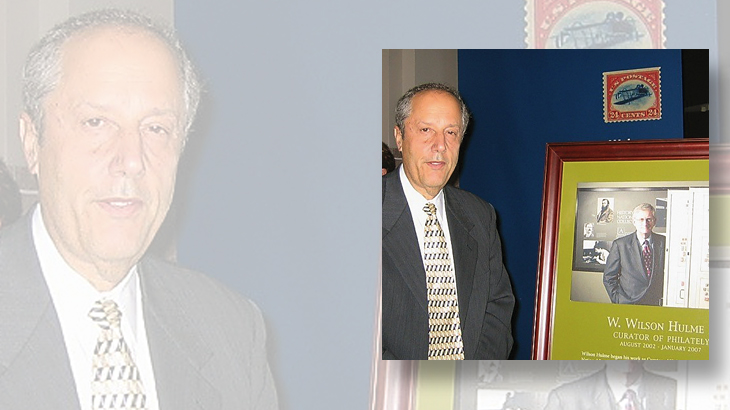 Allen R. Kane, who suffered a serious heart attack four months ago, announced Sept. 26 that he will retire as director of the National Postal Museum in January 2017.

Allen R. Kane, a former United States Postal Service executive who turned the National Postal Museum’s focus to stamps, announced Sept. 26 that he will retire as director of the museum in January 2017.

The 71-year-old told Linn’s that a heart attack he suffered about four months ago was the primary cause for his decision to leave the Smithsonian museum that he has run for the past 14 years.

“We’ve got a lot of stuff on the drawing board,” he said, expressing regret that his health would not allow him to remain at the head of the Capitol Hill museum during that period.

“I’m lucky to be alive,” Kane said, noting that his doctors want him to undergo some additional operations to correct the damage his heart suffered during the attack.

That would keep him away from the museum for several months, he said.

Smithsonian officials had been told of his decision several weeks earlier, he said.

Kane said he did not know who might succeed him as the third head of the museum, which opened in 1993 in a building that once housed Washington’s main post office. Nor did he say that he would likely have any role in the selection.

When Kane was picked to head the museum in 2002, a number of stamp collectors pleaded with him not to take the job.

He was not a stamp collector and many in the hobby held that against him, believing it would be wrong to have a noncollector in charge of what the museum called “the nation’s stamp collection.”

Kane, who had had a long career running key postal facilities for the U.S. Postal Service, listened to his critics and made their cause — stamps — the major focus of the museum.

Some collectors feared the museum had turned away from the stamp hobby, not displaying its most famous stamps — including its 1918 Jenny Invert airmail error stamp — all the time.

As director, Kane brought some of the world’s most famous stamp collections to Washington and in the process brought the world’s rarest stamp for display at the facility — the unique 1856 British Guiana 1¢ Magenta.

His crowning achievement was the 2013 opening of the William H. Gross Gallery, which doubled the museum’s space and made it the world’s largest museum devoted to stamps and postal history.

Kane also recalled his days with the USPS, noting that one of his proudest accomplishments was opening two major airmail facilities, at John F. Kennedy International and LaGuardia airports in New York, at the same time.

He also noted he had overseen the Gulf War Crisis Team at the USPS, which handled delivery of 2.5 million pounds of mail to U.S. troops during the first Gulf War.

Asked what he would tell the nation’s stamp collectors, Kane said: “Thanks for the memories. We have accomplished a lot of things together.”

He called collectors “an amazing group” whose love of their hobby underwrote their strong support for the museum during his tenure.

Asked what he planned to do, Kane said: “I’m a little concerned. You know I’m the kind of person who has to have something do to.”

Kane said his doctors’ advice will determine what he does.

Being head of the National Postal Museum has been “a great job, a lot of fun,” Kane said. “It’s like running your own business.”

The people he met in the world of stamps were wonderful, he said, and made his work all the more enjoyable.

“It’s difficult to overstate Allen’s contribution to the Smithsonian National Postal Museum and the stamp hobby,” said Donald J. Sundman, president of Mystic Stamp Co. and chair of the museum's council of philatelists.

“Allen has accomplished miracles,” Sundman said, citing the displays of the Benjamin Miller collection. It had remained behind locked doors at the New York Public Library for decades until Kane got it to display at the museum.

“I never thought collectors would see the Miller collection,” said Sundman. “We did, thanks to Allen and his team.”

“I didn’t think we could build a new street-level stamp gallery but Allen and his team created the Gross Gallery,” Sundman said.

“The Sundman Lecture existed in name only before Allen organized the first lecture. Allen oversaw the auction of millions of surplus revenue stamps which helped the stamp hobby by releasing the stamps on the market and raised millions for the NPM.

"Allen brought energy, new ideas, vision and excitement to the museum. My words sound like cliches, but Allen is a uniquely talented executive and it’s all true,” Sundman concluded.

Scott English, executive director of the American Philatelic Society, said, “Allen has worked tirelessly to open the world of stamps and stamp collecting to thousands of visitors every year in our nation’s capital.”

“Thanks to Allen’s leadership, the next generation of Americans will be able to see firsthand the important role stamps have played in our collective history,” English said.

"On behalf of stamp collectors everywhere, Allen has our gratitude and he will be sorely missed as a partner.”

Cheryl Ganz, who was the museum’s philatelic curator under Kane, said, “Allen brought a vision to the museum that put philately front and center.”

“He reached out to the philatelic community in new ways. I cannot imagine anyone else who could have brought together all the elements and experts to ensure the success of the William H. Gross Stamp Gallery,” she told Linn’s.

“He once told me that the greatest compliment he could receive would be as a great manager,” Ganz said. “On the Gross Gallery project, he excelled as that manager.”

Ganz said she is on the search committee for Kane’s replacement, but has no intention to return to Washington. “I love retirement,” she said.

Jim Cochrane, chief marketing and sales officer for the USPS, said: “Under Allen’s leadership, the museum has become an internationally known philatelic destination.”

“In addition to his very strong leadership at the museum, Allen also excelled at all leadership positions he held during his 30-year career with us here at the Postal Service,” Cochrane said. “I personally worked for Allen when he was [USPS] chief marketing officer and can emphatically state that his leadership set a course for the future that continues to bear fruit today.”

Maynard Benjamin, a stamp collector and president of the Global Envelope Alliance, told Linn’s: “Allen oversaw many remarkable exhibits but more importantly for all of us, he helped us celebrate our postal history, legacy and our future.

“His 30-year career with the United States Postal Service truly helped him with the director’s job. He knew the people of the Postal Service and the mailing industry; they were his working colleagues and friends and he understood how the system worked from top to bottom.”