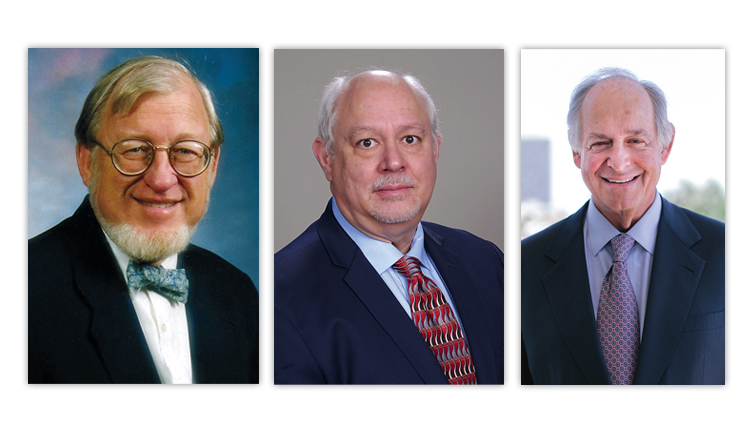 Ronald Lesher, Darrell Ertzberger and Alfredo Frohlich have been selected to receive the Luff award, the most prestigious recognition bestowed by the American Philatelic Society on a living philatelist.

All three awards will be presented during a ceremony on Aug. 14 at Great American Stamp Show in Rosemont, Ill. The annual show is co-sponsored by the APS, American Topical Association and American First Day Cover Society.

Lesher has been collecting stamps since 1956. His introduction to Ernest Wilkens turned him on to exploring revenue stamps and researching their unexplored nooks and crannies, which eventually became the principal focus of his exhibiting and writing.

Many of Lesher’s research articles have been published in State Revenue News and the United States Specialist. His column The Tax Collector has appeared in almost every issue of the American Stamp Dealer & Collector. Also, he recently became a regular contributor to the American Philatelist on revenue stamps.

Lesher has twice been a guest curator with the National Postal Museum.

Lesher has been a member of the APS since 1967. He served on the APS committee for the accreditation of national exhibitions and judges and two terms as an at-large member of the APS board of directors. In addition, he has been an instructor for APS summer seminars and on-the-road courses. Lesher currently is the chairman of the APS education committee.

Lesher has also served as president of the American Revenue Association and chairman of the revenue commission of the International Federation of Philately (FIP). He is a national and international accredited philatelic judge.

Ertzberger has been an exhibitor since 1982, an APS and ATA accredited philatelic judge since 1989, and an FIP juror since 2006 in thematics and since 2019 in postal stationery.

He also has developed philatelic shows on the local, national (World Series of Philately) and international levels.

He served as a delegate to FIP congresses from 2004 to 2010 and as the U.S. commissioner to Praga 2008 and Australia 2013. Over the years, he has been instrumental in inviting international judges to the Napex show to foster more recognition for U.S. shows and philately.

Frohlich is a collector, exhibitor and ambassador of philately. His support takes many forms: volunteering, helping other collectors by sharing his knowledge and time, aiding shows that need exhibits, and more.

After the financial crisis faced by the APS during 2009-10, he was instrumental in heading a development effort, the APS Campaign for Philately, that raised more than $6.7 million under his leadership. He was the chairman of the campaign from September 2009 to August 2015.

In 2011, he founded the Mighty Buck Club, which since its inception has received almost 20,000 gifts totaling over $501,000. Donations to the club support the technology and development needs of the APS.

Frohlich is the author of The Lansa Story and Private Mail Carriers of Colombia, published by the Colombian Philatelic Research Society in 2005 and 2006, respectively. He has instructed courses for the APS and served as an APS and FIP judge.

He is also an exhibitor, best known for his single-frame exhibit that proves that Colombia’s 1861 1-peso sheet was composed of 36 stamps instead of 54 as published by Federico Larsen in the late 1950s. This exhibit received grand awards in 2016 and 2018.

The Luff award was established in memory of John N. Luff, APS president from 1907 to 1909, who was considered the most prominent American philatelist of his era.

Recipients sign the Luff award scroll and are presented with engraved rings. The 2021 Luff award winners will join a distinguished company of 148 prominent philatelists. The Luff award is the most prestigious recognition presented by the APS to a living philatelist.