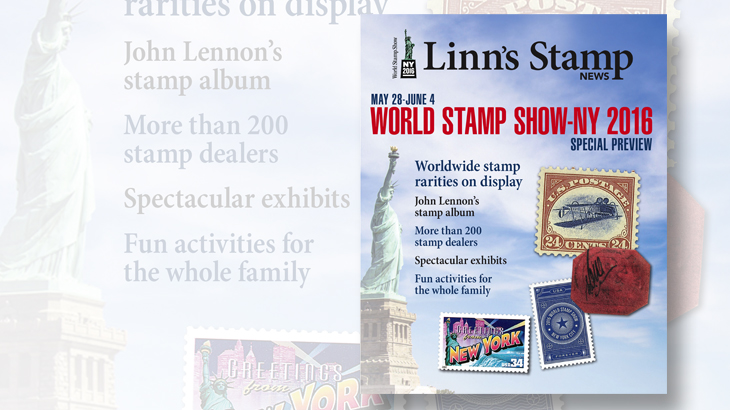 Linn’s Stamp News World Stamp Show-NY 2016 Special Preview features tips for collectors planning to attend the eight-day event and preliminary details on events and exhibits, including highlights from the court of honor.

The preview provides readers with a sneak peek into the many events, exhibits and entertainment planned for the first international stamp show to be held in the United States in 10 years.

If you’d like to see the preview issue yourself, printed copies are extremely limited. However we’ve made it available online in the Linn’s Stamp News Digital Edition. Current subscribers can access it immediately. If you’re not a subscriber, sign up now for free trial access — we’ll send you a link to the latest edition every Saturday.

In it you will find tips on how to prepare for the show, what to take along with you, and what freebies will be available. Former Linn’s editor-publisher Michael Laurence and Janet Klug, chair of the Citizens’ Stamp Advisory Committee and Linn’s columnist, share their experiences from past international shows. In addition, the preview includes lists of show events; postal administrations, dealers and societies who will participate; and a host of exciting activities.

What a bonus for Linn’s readers!

The highlights featured in the preview are just the tip of the iceberg. The show committee adds more events and participants daily, and Linn’s promises to keep readers informed.

As mentioned in this column in previous issues, Linn’s is an active participant in the international show. In cooperation with the show committee, we are creating a show passport designed to allow collectors to purchase stamps from postal administrations at the show and affix them to the appropriate page in this show souvenir. Linn’s also will publish three special show editions during the show: Monday May 30, Wednesday June 1 and Thursday June 2.

Each fall, following the close of that year’s catalog season, the Scott editors gather to select a cover theme for the next edition of the catalogs. In fall 2015, the editors considered a handful of possibilities but in the end made a royal decision.

More than 13,000 value changes were made in the recently published Vol. 1 of the 2017 Scott Standard catalog.