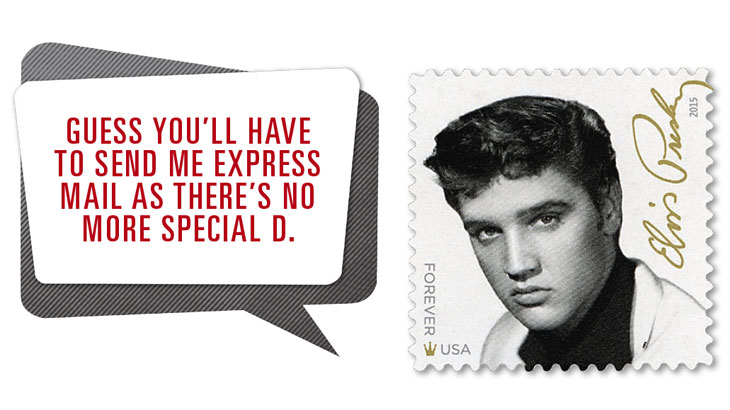 Elvis Presley recorded several songs with a postal aspect during his impactful career. One of these was a theme many readers spoke to in their entries for the May cartoon caption contest featuring the U.S. 2015 Elvis Presley forever stamp in the Music Icons series (Scott 5009).

Commenting on the modern postal era, Mark Farrell of Loveland, Ohio, has the king saying, “With this Forever stamp, you don’t need to be worried about a letter being ‘Returned to Sender’ when rates change.”

Another favorite song for the contest entries was used by Reid Hinson of Kill Devil Hills, N.C., “Give me a sock on the nose cancel; just stay away from my blue suede shoes!”

John Kozimbo of Lakewood, N.J., chose the same song but used it to comment on Elvis’ facial expression on the stamp, “Of course I’m frowning! Suede shoes are way too tight!”

On the nonphilatelic side of the contest, the winner is Greig Best of Sacramento, Calif., whose line is right up to date, “I’m going Green. Just call me Elvis Parsley.”

“I may look tough, but soak me in water and I fall apart!” by Dave Schwartz of Commack, N.Y.

“Bugs don’t bother me so why should I watch out for The Beetles?” from John Leonard of Hatboro, Pa.

“This is the better way of my picture showing up at the Post Office,” sent by Mike Wright, of Duanesburg, N.Y.

“It took Forever for the Citizens Stamp Advisory Committee to approve a second stamp for me,” by Steve Kotler of San Francisco, Calif.

“This stamp don’t do justice to my hairstyle,” from Bob Bialo of Cary, Ill.

“Man, I was tame compared to what they do now … I didn’t do anything but just jiggle,” an actual quote submitted by Fred Steinberg of Newton, N.J.

“I’ve been frowning ever since I found out that Mom threw away my stamp collection,” from Jack Ring of Kansas City, Mo.

Thanks and a tip of the hat to all who entered. The next contest will be announced in the July 11 issue of Linn’s.