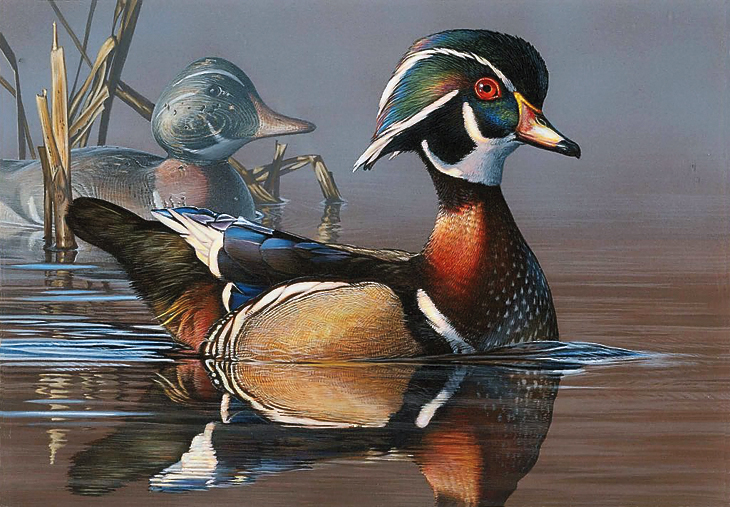 Scot Storm’s acrylic painting of a male wood duck with a wood duck decoy was chosen Sept. 15 as the winner of the 2018 federal duck stamp art competition sponsored by the U.S. Department of Fish and Wildlife.

A detailed acrylic painting of a male wood duck with a wood duck decoy will illustrate the 2019 United States federal duck stamp.

Artist Scot Storm of Freeport, Minn., won the annual competition that selects the design for the collectible stamp set issued each year.

Storm’s painting was picked as the best from among more than 150 submitted artworks in the U.S. Fish and Wildlife Service’s 2018 federal duck stamp art competition held this year at Springs Preserve in Las Vegas, Nev.

Artists entering the contest had to depict one of five waterfowl as their primary subject: wood duck, American wigeon, northern pintail, green-winged teal and lesser scaup.

The winner was announced Sept. 15 at the conclusion of judging during the two-day event.

It is the second win in the federal contest for Storm, whose painting of a pair of redhead ducks in flight illustrates the 2004 $15 federal duck stamps (Scott RW71-RW71A).

His wildlife paintings have also appeared on numerous state conservation stamps, including the Minnesota pheasant stamp in four different years, and the 2017-18 and 2018-19 South Carolina duck stamps. Storm is also a three-time recipient of Ducks Unlimited’s international artist of the year award.

Since 1949, the artwork for the federal duck stamp has been chosen in a juried competition, originally in Washington, D.C., but now held at a different location each year.

The artwork is displayed during the competition, which is open to the public.

For the first time, the 2018 art contest required artists to include in their entry “one or more visual elements that reflect the contributions waterfowl hunters make to habitat conservation.”

In Storm’s painting, that takes the form of the duck decoy.

Other artists included background images of hunters with firearms observing or taking aim at waterfowl.

Several chose to show decoys or other elements including duck blinds, shotgun shells, duck hunting calls and so on.

A few of the submitted entries appeared to ignore the new contest requirement and simply depicted the duck in its natural setting.

Waterfowl hunters age 16 and older are required to purchase the federal duck stamp and carry it when they hunt.

The funds collected from sales of the stamps raise about $40 million each year to conserve and protect wetland habitats in the National Wildlife Refuge System, according to the Fish and Wildlife Service.

Though not valid for postage, the federal duck stamp is a popular collectible listed and valued in Vol. 1 of the Scott Standard Postage Stamp Catalogue and in the Scott Specialized Catalogue of United States Stamps and Covers.