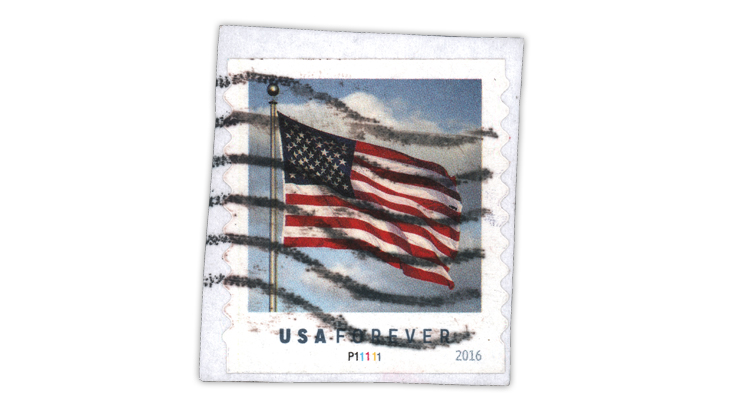 A dealer in Florida found this tagging-omitted example of the United States 2016 Flag coil printed by Ashton Potter USA Ltd. in February 2020. The Philatelic Foundation certified the error stamp as genuine in early May 2020.

A United States 2016 nondenominated (49¢) Flag coil with the tagging omitted in error was discovered in early 2020 in a charity mixture.

The new tagging-omitted error, which occurs on the 2016 Flag coil printed by Ashton Potter USA Ltd. (Scott 5053), was brought to the attention of Linn’s Stamp News by Robert Thompson, an expert on U.S. plate number coil stamps and modern U.S. counterfeit stamps.

As shown here, the stamp is on piece and bears a sprayed-on wavy line cancellation that ties the stamp at left.

A plate number, P11111, appears in the bottom margin, just below the “USA FOREVER” inscription. The “P” prefix indicates that Ashton Potter is the printer.

Thompson informed Linn’s March 6 that Bob Murrin of Florida found the new error stamp Feb. 14, 2020, in an assortment from a Florida charity.

Murrin told Linn’s March 9 that he found the error in the same charity mixture that yielded the tagging-omitted error of a 2018 Flag coil (Scott 5261) that Linn’s reported on page 8 of the March 29 issue.

Thompson said that the long delay between the discovery of the 2016 Flag coil error and reporting it to Linn’s was due to an oversight on his part.

“I thought I had sent notice to Linn’s, but when I checked, I found I never did,” Thompson said.

As with the tagging-omitted error of the 2018 Flag coil, Thompson carefully examined the 2016 Flag coil error to verify that it wasn’t a counterfeit, because the vast majority of modern U.S. counterfeit stamps are not tagged.

Among other things, this required comparing features of the subject stamp to the characteristics of the seven known counterfeits of Scott 5053 listed in the Postal Counterfeits section of the Scott Specialized Catalogue of United States Stamps and Covers, all of which are untagged.

Thompson’s evaluation required close scrutiny under high magnification of certain features such as the “USPS” microprinting and the shape of the vertical serpentine die cuts at left and right.

On genuine examples of Scott 5053, the microprinted “USPS” is at the right end of the second white stripe on the flag. Scott 5053 was printed on nonphosphored paper to which block tagging was applied, according to the U.S. Postal Service.

The microprinted “USPS” is clearly visible on the new tagging-omitted error.

Not long after identifying the error stamp, Thompson sent it to the Philatelic Foundation in New York City for expertization.

The expert committee of the Philatelic Foundation issued its opinion on certificate No. 567785 dated May 5, 2020, stating that the stamp is “used, single on small piece, untagged.” The certificate also declares that the stamp “is genuine.”

Jay Bigalke, editor-in-chief of the Scott catalogs, said that the new tagging-omitted error will be listed in the 2022 edition of the Scott U.S. Specialized catalog, which is scheduled for publication in October.