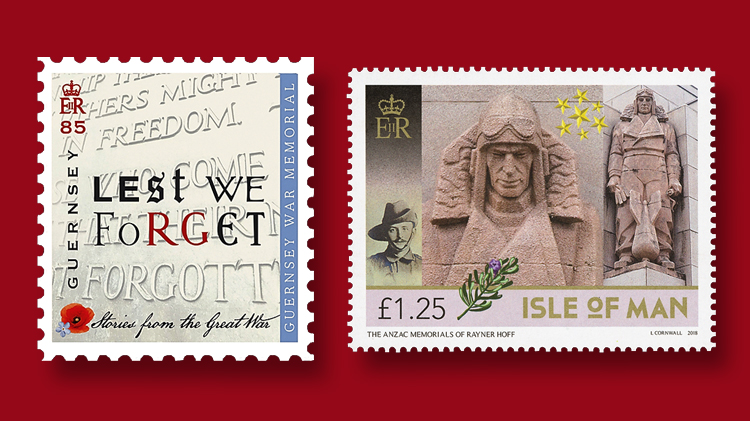 War memorials also are featured on recent stamps from the Isle of Man and Guernsey. 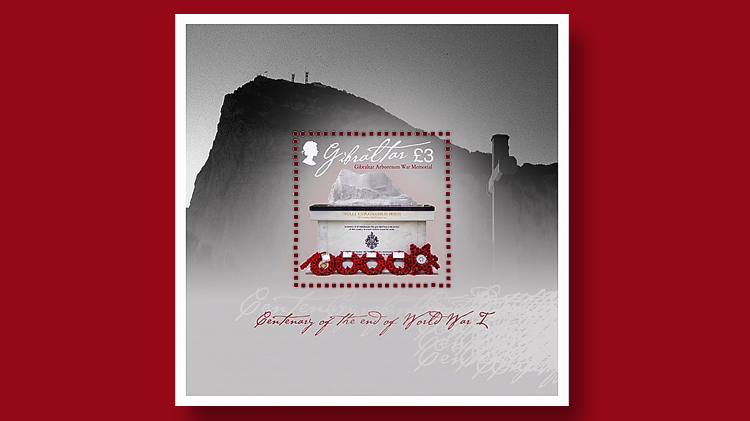 The Rock of Gibraltar Memorial at the National Memorial Arboretum in England is pictured on the stamp in this souvenir sheet issued Sept. 21.
Previous
Next

Gibraltar, Guernsey and the Isle of Man recently issued stamps depicting war memorials to commemorate the 100th anniversary of the end of World War I.

As reported in the Nov. 5 Linn’s, page 13, many other postal administrations also are issuing stamps to mark the 100th anniversary of the armistice that ended the war.

One of these stamps contains a single £3 stamp featuring the Gibraltar War Memorial at the National Memorial Arboretum in Lichfield, Staffordshire, England. Carved out of a 3.5-ton piece of limestone it is “dedicated to the Gibraltarians who paid the ultimate price and whose names are carved in stone on this memorial,” according to Gibraltar’s philatelic bureau.

The monument was designed by Anselmo Torres, who also has designed stamps for Gibraltar.

The other souvenir sheet from Gibraltar includes four se-tenant (side-by-side) stamps with a continuous design in black-and-white of soldiers in WWI.

Guernsey is completing its five-year WWI series Nov. 8 with a set of six stamps showing details from memorials honoring islanders who died in the war.

Each design also includes a red poppy in the lower left followed by “Stories from the Great War” and a large “Lest We Forget” inscription in the center. Two letters in the inscription are in red on each stamp, starting with the “LE” on the first stamp denominated 46 pence.

The fifth stamp, the 85p denomination that is shown nearby, has the letters “RG” in red and pictures part of the inscription from the Guernsey War Memorial on Smith Street in St. Peter Port.

A set of six stamps released Aug. 4 by the Isle of Man includes images from Anzac memorials in Australia sculpted by Rayner Hoff. Born in 1894 on the Isle of Man, Hoff served in the British Army during the war, and immigrated to Australia in 1923.

The £1.25 stamp pictured nearby shows the sculpted figure of an aviator from the Anzac memorial in Sydney, Australia.

This stamp design also includes a spring of rosemary, representing the Battle of Gallipoli, and shows a small photograph of Pvt. John Gell. From Castletown on the Isle of Man, Gell served in the 45th Australian Infantry and was killed in action at Gallipoli.

The other five designs are similar in format, featuring different views of war memorials, plants related to the war or remembrance, and soldiers from the Isle of Man or of Manx descent. A black-and-white photo of Hoff also is included in the design of the 83p stamp.