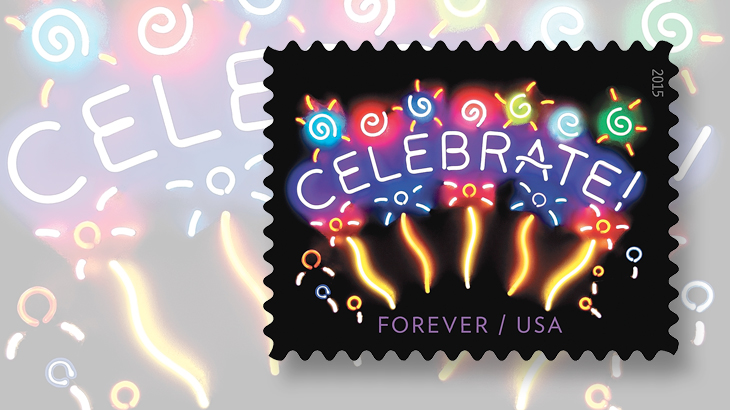 A new variety of the United States Neon Celebrate forever stamp is being issued Sept. 9.

A new variety of the Neon Celebrate forever stamp will be issued Sept. 9, according to the United States Postal Service. No ceremony is planned.

USPS spokesman Mark Saunders confirmed the date and told Linn’s Stamp News that the stamp will be issued in Kansas City, Mo.

The stamp design is similar to the Neon Celebrate forever stamp issued March 25, 2011 (Scott 4502), but the “Forever” and “USA” inscriptions, which appear in the upper left and right corners of the 2011 stamp, have been moved to the lower half of the stamp on the new issue.

The new stamp also has a small 2015 year date reading down from the upper right corner.

During an Aug. 20 meeting with journalists in Grand Rapids, Mich., USPS acting director of stamp services Mary-Anne Penner said that the issue date for the new Neon Celebrate stamp would be determined when stocks of the earlier stamp had been drawn down.