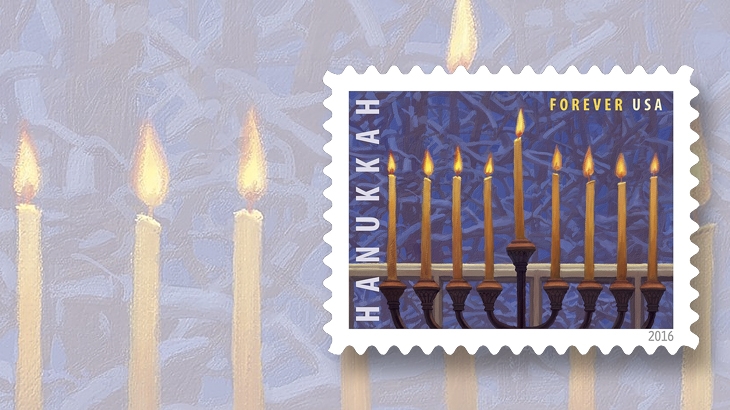 The Hanukkah forever stamp with artwork by William Low depicts a menorah in front of a window, with tree branches and night sky outside.

The nondenominated (47¢) Hanukkah forever stamp that will be issued Nov. 1 is the 12th United States stamp honoring the Jewish holiday also known as the Festival of Lights, and will feature the sixth new design in the series.

The stamp is being issued in a pane of 20. The first-day ceremony will take place at 11 a.m. at Temple Beth El, 333 SW Fourth Ave., in Boca Raton, Fla. The ceremony is free and open to the public. The temple notes that the ceremony will include Chanukah musical performances by the temple’s cantorial team and children of the Beth El Early Learning Center.

“The 2016 Hanukkah stamp features a warm, elegant illustration of a holiday menorah in the window of a home,” according to the U.S. Postal Service. “Artist William Low added visual interest to the scene by highlighting the contrast between the hot candle flames and the cool snow, the vertical candles and the horizontal window frame, and the dark menorah with brightly lit candles.”

Hanukkah is observed for eight nights and days; the holiday commences this year at sunset on Dec. 24. Traditions associated with the holiday include lighting the menorah, singing songs, giving gifts to children, and playing games with the dreidel, a four-sided spinning toy.

Along with the stamp pane, the Postal Service is also offering an unspecified number of press sheets containing 160 die-cut stamps (eight panes).

Technical details and first-day cancel ordering information for the Hanukkah forever stamp can be found below.

Standard ordering instructions apply. Collectors requesting first-day cancels are encouraged to purchase their own stamps and affix them to envelopes. The first-day cover envelopes should be addressed for return (a removable label may be used), and mailed in a larger envelope addressed to Hanukkah Stamp, Stamp Fulfillment Services, Cancellation Services, 8300 NE Underground Drive, Pillar 210, Kansas City, MO 64144-9998.

Requests for first-day cancels must be postmarked by Jan. 1, 2017.