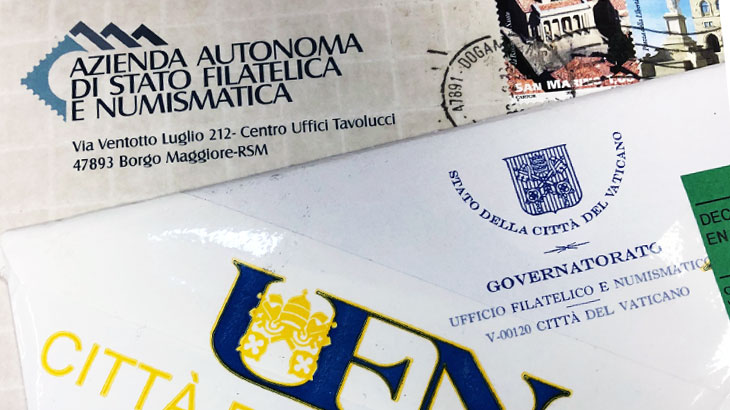 Mail sent from the San Marino and Vatican City philatelic and numismatic bureaus.

San Marino and Vatican City have passed laws to incorporate their philatelic and numismatic bureaus into the respective postal operations: Poste Vaticane (Telecommunications Directorate) and Poste San Marino (a shared company, incorporated in 2015). These measures were taken to streamline administrative aspects, while saving on costs.

Section 46 of the 2019 budget of the Republic of San Marino gave the Congress of State the authority to issue a delegated decree to transfer the bureau operations to Poste San Marino. The decree sets out the modalities and the timing of the transfer of the operation, including the bureau staff aspects.

The required decree was planned for March 31, but is now expected to be issued in autumn. Everything should be in place for the start of the new management on Jan. 1, 2020.

However, through June 2020, administrative powers for new stamp and coin issues and for the selection of related themes will continue to be a prerogative of the head of the Congress of State and of the Artistic and Technical Committee (headed by Gianni Sinni, a veteran of communications and a teacher at the University of the Republic of San Marino).

After years of plenty, in 2013, San Marino had already started to adopt changes in line with a more sober market by dissolving the state’s autonomous philatelic and numismatic company established in 1981 and replacing it with the philatelic bureau shared company established in 1945 and fully owned by the state. The bureau was instituted concurrently with the Philatelic Congress created for the study and regulation of philatelic matters, as well as being custodian and coordinator of the Philatelic Museum and related assets.

The bureau’s administration is headed by the secretary of state for finance in the capacity of president, members selected by the Grand and General Council, and a philatelic consultant in an advisory capacity.

The structural and bureaucratic changes of the Vatican City philatelic and numismatic bureau appear more draconian. These changes came about as a result of the law signed by Pope Francis on Nov. 25, 2018. The law went into effect on June 7.

Previous reform regarding this agency was introduced on July 16, 2002, with full approval of Pope John Paul II. Earlier changes date back to the June 24, 1969, law signed by Pope Paul VI.

Meanwhile the philatelic and numismatic bureau of the Vatican has a new website. Announcements of new issues also can be found online.