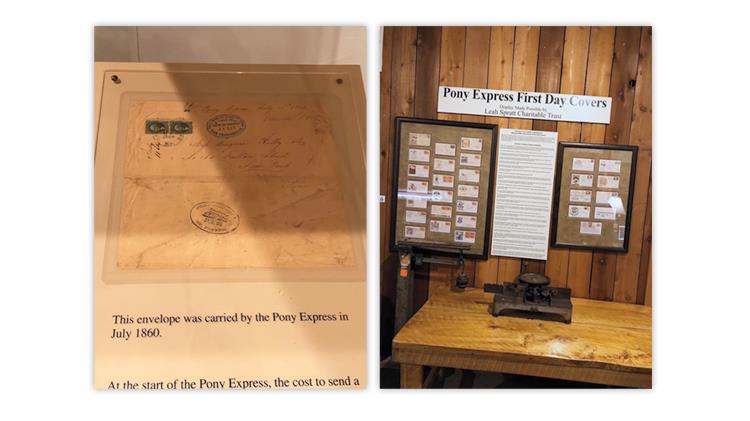 This July 1860 pony express cover was on display at the Pony Express National Museum in St. Joseph, Mo. Also shown is a photograph of a display of first-day covers of United States stamps and stationery related to the pony express. 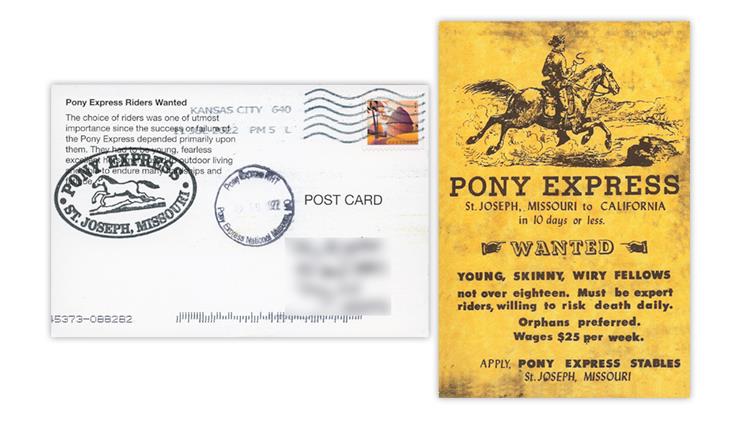 Both sides of a postcard the author sent back home with two rubber stamps added to decorate the address side of the card.
Previous
Next

The story of the pony express is a prominent highlight in the city of St. Joseph, Mo., to this day. The town was the starting point on April 3, 1860, for the express route to Sacramento, Calif. That first run took just 10 days.

Today the Pony Express National Museum is one of many points to visit in St. Joseph. In mid-July, I had the good fortune to have strategically made a stop at the museum on a road trip out West.

During my brief visit, I was able to explore the museum, and I also stopped at a pony express rider statue located in a different part of town.

The museum has a lot to offer to the general visitor, but it also includes a number of philatelic items.

One of the highlights was a piece of mail sent in July 1860. It is in a light-sensitive case in the museum, and a photo of it is shown nearby.

Another philatelic display was of first-day covers of United States stamps and postal stationery that were issued to honor the pony express. A photo of that display is also shown nearby.

For visitors looking to create some souvenirs to send home, the gift shop had a number of postcards available for purchase. I bought the one shown here that mimicked an early riders-wanted poster. On the reverse, I added the Pony Express National Historic Trail marking the museum had in the gift shop. I also went back into the museum to one of the stations that had a faux pony express rubber stamp that I added to my card.

For more information on the museum and the other historic sites in St. Joseph related to the pony express service, visit the museum’s website.