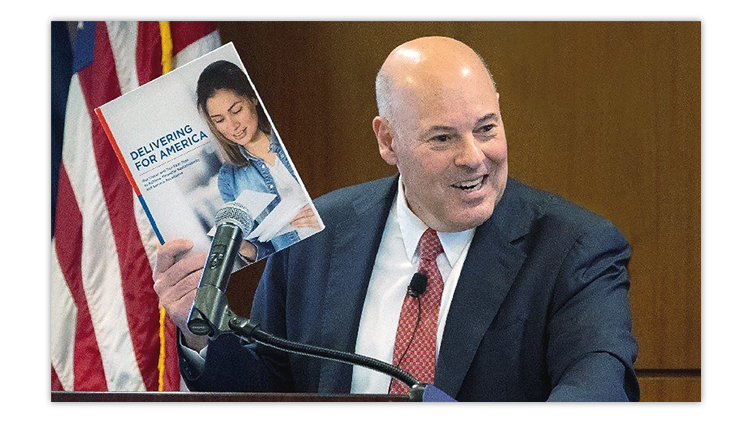 Postmaster General Louis DeJoy, who spoke to the American Enterprise Institute in Washington, D.C., on July 27, plans to remake the Postal Service into an organization that can survive in an era of declining letter volume and increasing package mail. Imag

The way some Congressional Democrats were telling it, this should be the period of Postmaster General Louis DeJoy’s decline.

President Biden’s appointees to the Postal Service’s board of governors now control the board.

Biden himself has made clear he disapproves of DeJoy’s reluctance to endorse the fully electric postal truck fleet that he wants.

Yet DeJoy is showing no signs of leaving Washington, D.C.

If anything, he is more aggressively pushing his agenda of increasing stamp prices, revamping mail processing and boasting that he hasn’t had “a stressful day” since becoming head of the Postal Service two years ago.

As DeJoy told the American Enterprise Institute (a think tank based in the nation’s capital) on July 27, he came to the Postal Service when it was in dire condition, driven to near collapse by the leaders who preceded him at the Postal Service’s headquarters at L’Enfant Plaza.

According to DeJoy, his predecessors allowed the USPS to continue “subsidizing the mail industry,” allowed postal buildings and trucks to deteriorate and failed for years to meet their own delivery standards.

“I was hired to lead,” said the man who introduced himself as “the evil postmaster general.”

The 75th postmaster general made clear he believed his job was “not just to deliver mail.”

His mission, he said, is to remake the Postal Service into an organization that can survive in an era of declining letter volume and increasing package mail.

DeJoy said he was refocusing the Postal Service so it can survive.

“We have begun to change the direction of the Postal Service,” he told the American Enterprise Institute audience.

And the man who still has the thick accent of his native Brooklyn, N.Y., said he was the right man to lead that change.

“I love what I am doing,” DeJoy said. “I never thought something would be more exciting than money.”

Amid all the controversy he has stirred as the Postal Service’s chief executive, DeJoy said he has enjoyed the combat.

DeJoy repeatedly praised the postal workforce, saying he was impressed by the people he leads.

They are “really amazing,” he said, citing how they quickly moved to distribute COVID-19 test kits to homes across the country.

As for getting taxpayers to fund some of the Postal Service’s operations, DeJoy said “that wasn’t a government handout.”

And he exuded confidence that his 10-year Delivering for America plan can move the USPS closer to its goal of being self-sufficient.

“We’re half way there,” he said, predicting that the USPS would be pretty close this year to being profitable.

The postmaster general offered details on his plan to restructure mail processing, saying the plan calls for merging the more than 500 locations that process mail into about 65 to 75 “sort and delivery” regional centers.

Such a restructuring could cut the number of postal workers by 50,000, a drop that DeJoy said can be easily accommodated.

The Postal Service expects 200,000 workers will retire during the next 10 years, DeJoy said.

A key to the future will be the growth of first-class packages delivered by ground, he said.

It will be a changed Postal Service, he said.

Although his plans will dramatically change how mail is processed, he assured his audience he knows what he is doing.

When his American Enterprise Institute host sought to end the question-and-answer session after one hour, DeJoy said he wanted a few more questions.

“I’m raising stamp prices, so I can stay around,” he said.