Postage due stamps capture the beauty of Lebanon’s iconic places 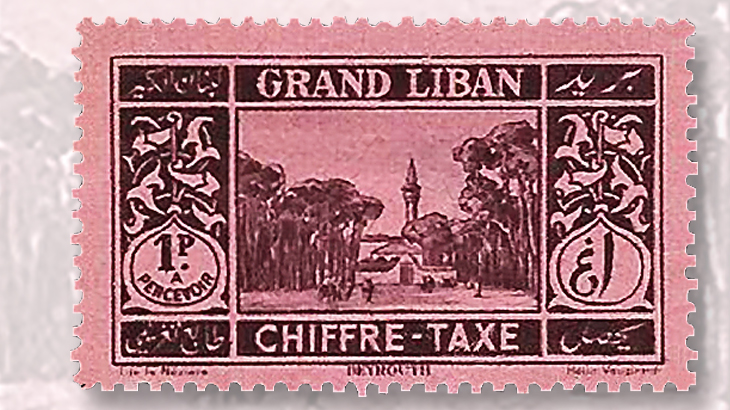 The park in Beirut known as Horsh Beirut, Horsh El Snoubar and the Pine Forest is pictured on the 1-piaster postage due stamp. 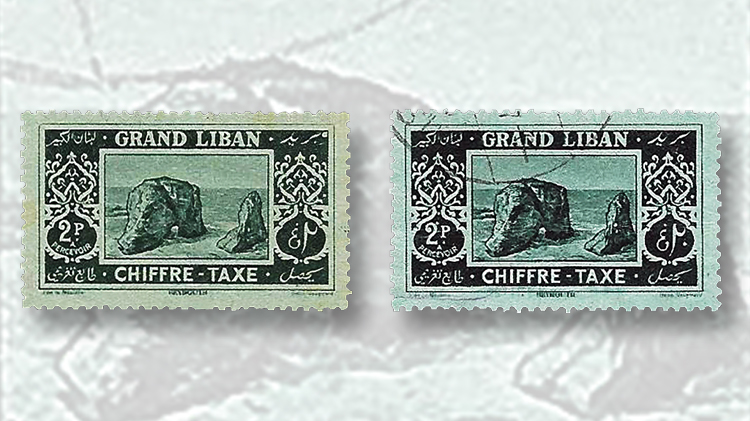 Lebanon’s 2-piaster postage due stamp depicts the rock formation called Pigeons’ Grotto. A variety exists of this stamp with a dot to the right of the Arabic numeral in the denomination. The normal stamp is shown on the left, and the variety on the right. 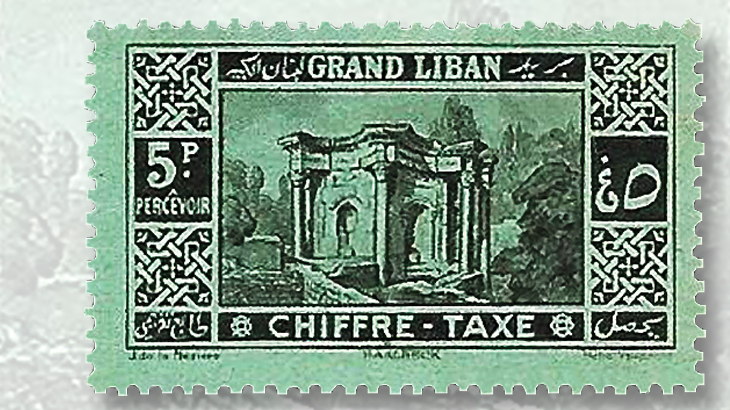 The 5-piaster denomination in Lebanon’s 1925 postage due set features the ruins of the temple of Venus in Baalbek. 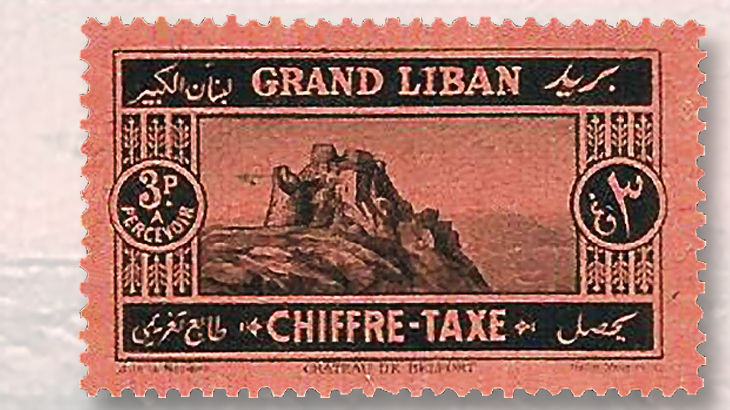 Beaufort Castle, shown on the 3-piaster postage due stamp, was established as a fortress by the Crusaders in the early 12th century. In Arabic, it is called Qala’at al-Shaqif (Castle of the High Rock). 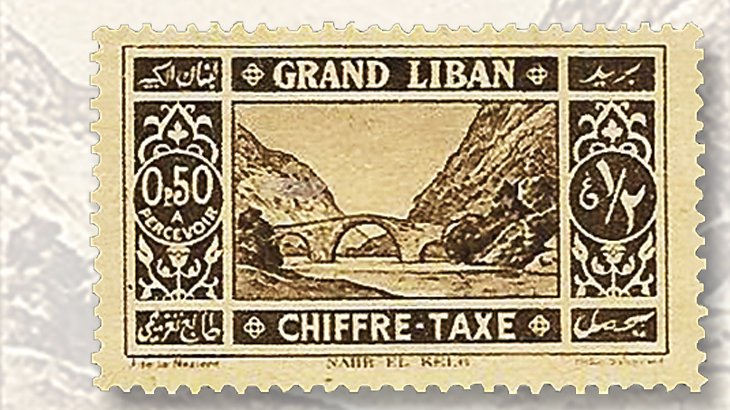 The 1½-piaster denomination in Lebanon’s 1925 postage due stamp shows a bridge over the Dog River.
Previous
Next

Lebanon’s postage due stamps of 1925 capture the beauty of some of its iconic sites, including the Pine Forest in Beirut, Beaufort Castle, Dog River, Pigeons’ Grotto and the Roman temples at Baalbek. These places bring immense pride to the people of Lebanon.

In the 2018 Scott Standard Postage Stamp Catalogue, a mint, never-hinged set is valued at $42.50. If you want a mint hinged set, the cost is going to be much less at $13.80. For those who collect used stamps, this set is valued at $7.75 in the catalog. No matter what you collect, make sure to obtain a set that is free from faults.

I challenge the postal history collector to assemble a collection of these postage due stamps on covers.

Helio-Vaugirard in France printed the stamps on colored, unwatermarked paper. They are horizontal in format and perforated gauge 13½.

The table with this column gives the design color, paper color, name of the site pictured, and the quantity printed of each denomination.

Imperforates exist. They are rare. The quantity issued was limited to 100 sets.

Avoid buying imperforate single stamps; many of the single imperforates that I have seen have been perforated stamps with trimmed perforations. Buy imperforates in pairs or larger multiples to confirm their authenticity.

All the stamps share the same bilingual inscriptions. At top left is the name of the country “Greater Lebanon,” in Arabic. In the top center is the same in French. At top right is the word “posts,” written in Arabic.

To the right of the central design are the denomination and currency in Arabic. To the left is the French equivalent for “the amount on each stamp to be collected.”

The central design of the  ½pi stamp depicts a bridge across the Dog River. Locally known as Nahr El-Kalb, the Dog River is 19 miles long. It originates from a spring near the Jeita Grotto, and it enters into the Mediterranean Sea.

Located at the estuary of the river are carved commemorative stelae, most of which tell the history of the foreign powers that once ruled this area. Among these rock reliefs and inscriptions are three Egyptian hieroglyphic inscriptions, some cuneiform Neo-Assyrian and Neo-Babylonian, Greco-Roman, Islamic inscriptions and others.

More recent is a 1946 monument to Lebanon’s independence from France three years earlier (1943).

Also, the park suffered tremendous damage during the Lebanese civil war (1975-90). After the war ended, the government reconstructed the park and kept it closed for approximately 25 years, only allowing visits by permit.

Two gigantic rocks that protrude from the Mediterranean Sea are depicted on the 2pi stamp. This natural spectacular and picturesque landmark is referred to as the Pigeons’ Grotto.

The rocks are located off the coast of Raouche, and this Beirut neighborhood’s cliffside cafes are great places to watch and take photographs of the grotto at sunset.

A total of 835 stamps with this variety were made, but today the quantity remaining is much less.

The 3pi denomination displays the ruins of a castle in southern Lebanon. The Crusaders  are believed to have constructed this fortress in the early 12th century, naming it Beaufort, the French equivalent for beautiful fortress.

The Arabic name for this castle is Qala’at al-Shaqif, which translates to Castle of the High Rock.

A friend who visited the castle told me that because it was built on top of a hill, it offers a breathtaking view of the surrounding area.

The 5pi stamp features the temple of Venus in Baalbek. Situated in the northern Bekaa Valley, the town of Baalbek is approximately 53 miles northeast of  Beirut.

Baalbek is the home of the magnificent Roman ruins that can be considered as part of the wonders of the ancient world.

Built in the third century, the temple of Venus was a dedication to the goddess of love and later became a church in honor of St. Barbara.

Because the ruins at Baalbek have immense tourism value, the Lebanese government takes great care maintaining them. These ruins are a must-see site if you ever visit Lebanon.

As someone who is originally from Lebanon, every time I look at these postage due stamps, I am reminded of the beautiful places back home. And, for those who have never been to Lebanon, you can visit these places by owning this stamp set.