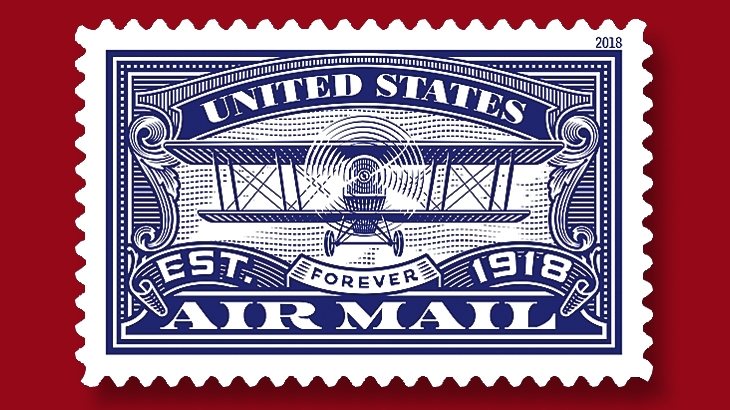 A blue forever commemorative stamp celebrating the 100th anniversary of the beginning of scheduled airmail service in the United States will be issued May 1. The central design shows the Jenny airplane that carried early airmail. 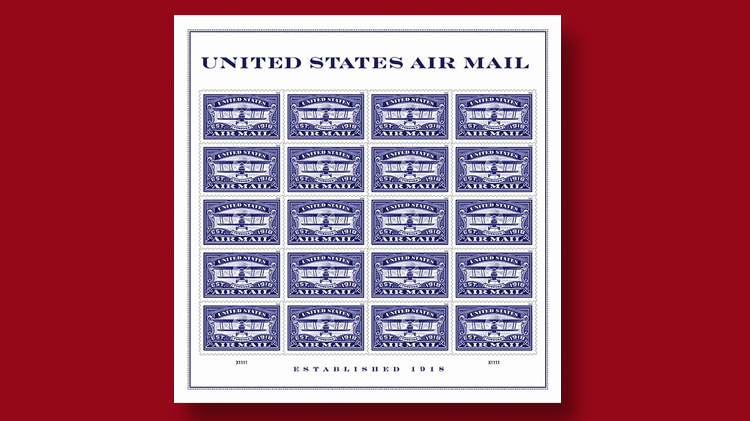 The pane of 20 U.S. Airmail Anniversary forever stamps. The stamps are intaglio-printed, using a design mechanically reproduced from an original illustration created digitally.
Previous
Next

Only 15 years after the Wright Brothers achieved their history-making first powered flight in 1903, postal mail in the United States was being transported in airplanes on a regular schedule.

On May 1, the U.S. Postal Service will begin a celebration of the 100th anniversary of U.S. scheduled airmail service by issuing a U.S. Airmail Anniversary stamp in Washington, D.C.

A curved banner across the top reads “United States,” while a second banner along the bottom reads “Air Mail.” A ribbon inscribed “Est. 1918” is positioned just below the vignette, which shows the front of the Jenny biplane with its propeller turning.

It is the first of two stamps with identical designs that will be issued this year in association with the airmail anniversary. The second, to be issued on a date this summer that hasn’t yet been announced, will be nearly identical but printed in red.

Both stamps are intaglio-printed using a design mechanically reproduced from an original illustration created digitally.

The stamps are being printed and processed in panes of 20 by USPS contract printer Ashton Potter.

Some local post offices might not have the new stamp on hand, because the Postal Service “will not make an automatic push distribution” of this issue to post offices. That means the post office won’t receive the new stamp unless it places an order for it with USPS Stamp Fulfillment Services.

The ceremony coincides with the opening of the museum’s new exhibit, “Postmen of the Skies.”

Admission to the museum is free, and the first-day ceremony is open to the public.

The ceremony will begin Tuesday at 11 a.m., but details of the event have not been announced.

“On May 15, 1918, in the midst of World War I, a small group of Army pilots delivered mail along a route that linked Washington, Philadelphia, and New York — initiating the world’s first regularly scheduled airmail service,” the Postal Service noted in a press release.

The first mail transported by air in the United States is said to be a letter from George Washington carried aloft in a hot air balloon by French inventor Jean Pierre Francois Blanchard on Jan. 9, 1793, traveling from Philadelphia, Pa., to Gloucester County in New Jersey.

The U.S. Post Office Department became intrigued with the idea of carrying mail by airplane several years before the official airmail routes were established. In 1911, Earle Ovington, often recognized as the first airmail pilot in the United States, flew a route between Garden City and Mineola in New York, heaving a sack of mail from the plane’s cockpit to be collected by the Mineola postmaster waiting below.

After a number of experimental flights and an initial organization effort that failed to get off the ground, the USPOD got the funding it needed to begin airmail service.

“In 1918, Congress appropriated $100,000 to establish experimental airmail routes,” according to the U.S. Postal Service. “The Post Office Department urged the Army Signal Corps to lend its planes and pilots to the Department to start an airmail service. Carrying the mail, the Department argued, would provide invaluable cross-country experience to student flyers. The Secretary of War agreed.”

Letters sent on the Washington, Philadelphia and New York route cost 24¢ initially, and the USPOD issued its first airmail stamp, the carmine and rose Jenny (Scott C3), on May 14, 1918.

The 24¢ airmail stamp was famously discovered by William T. Robey on its day of issue with the central image printed upside down, an error known today as the Jenny Invert (C3a).

The airmail letter rate was reduced to 16¢ on July 15, fulfilled by a new 16¢ green Jenny stamp (Scott C2). Another reduction effective Dec. 15 brought about the 6¢ orange stamp (C1).

The intaglio printing and matching designs of those first three U.S. airmail stamps, designed by Clair Aubrey Huston of the U.S. Bureau of Engraving and Printing, may have provided some inspiration for the design of the new anniversary forever stamp.

Domestic airmail and international airmail existed as separate services for many years until air travel became so prevalent that first-class mail within the United States traveled by air as a matter of course. The domestic airmail class officially ended 41 years ago on May 1, 1977.

Airmail service was replaced by a new classification, first-class international mail, and a round nondenominated ($1.10) Earth global forever stamp (Scott 4740) was issued Jan. 29, 2013.

The new forever stamp commemorating the airmail service anniversary is not the first U.S. stamp to celebrate the long history of airmail.