Report sees parcels as the future of the U.S. Postal Service 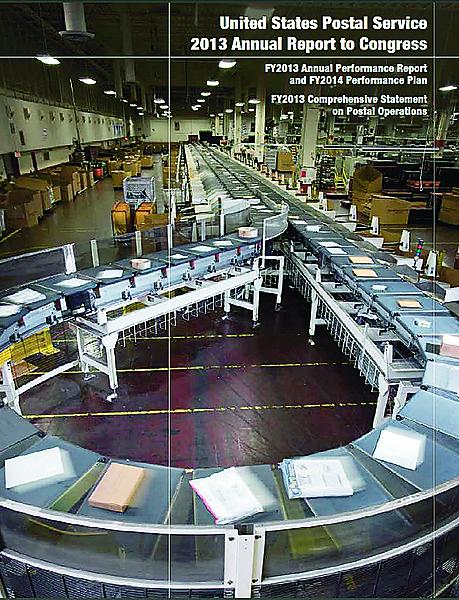 The United States Postal Service has issued its annual report for fiscal 2013, a year that was marked by another $5 billion loss. But with Congress seemingly unwilling to make changes to the agency’s business model, what lies ahead for the USPS?

This new publication, filled with pages of statistics about the mail, seems to offer a look to the future.

You don’t have to look any further than the cover to get the direction in which Postmaster General Patrick Donahoe is pointing the organization.

Parcels are the future of the Postal Service, he says.

From the cover featuring a parcel sorting machine with no humans in sight to the words inside, this report reflects the postmaster general’s view that letter mail will not return to dominate USPS operations.

“…First-class mail volumes are unlikely to return to previous levels, so we have to shift our resources to areas where we can best serve our customers, such as our growing package business,” the report says.

“With more consumers shopping online, the Postal Service wants to become America’s shipper of choice,” the report says. “We have the people, the network and the logistical expertise to deliver online orders to every address in the nation.”

Letter mail remains the bigger piece of the pie.

“The Postal Service delivers 523 million mail pieces and picks up 727,167 packages on a typical day,” notes the report.

It will take a lot more parcel mail to make the USPS a strong rival to its competitors FedEx and United Parcel Service. Both companies got black eyes this past Christmas Eve for underestimating the volume of parcels they would be asked to deliver. Many Christmas parcels were not delivered by Christmas Day by the two firms.

USPS saw its parcels grow at a double-digit rate during the holidays.

“The week before Christmas, the Postal Service delivered nearly 90 million packages with a daily average of 10 million per day for the holiday season,” according to a Jan. 3, 2014, news release. “It handled more than 75,000 packages on Christmas Day.

But the USPS dodged negative press coverage aimed at the two giants in the parcel business because, as one spokesman acknowledged, it remains a relatively small player in the parcel world.

It is aggressively touting its flat-rate parcel boxes in advertising that cites the free insurance and tracking that now comes with those products. No new innovation seems to have caught the public’s attention as much as the flat-rate boxes.

Stamps do get a couple of mentions in the agate type that accompanies the annual report.

There is a listing of the stamps that were issued in the year and a mention of the previously reported changes in the way the USPS accounts for the sales of forever stamps. It cut by $1.3 billion the Postal Service’s liability for the value of forever stamps held in the public’s hands.

“This accounting adjustment has no impact on the Postal Service’s receipt of cash, or cash on hand, nor does it lessen the severity of its current liquidity situation,” the report says.

“The Postal Service still has only nine days of operating cash entering 2014,” the report says.

In the words of Joe Corbett, Postal Service chief financial officer, that means that the agency’s financial crisis remains a very serious problem.

The report makes clear that the Postal Service remains committed to pressing Congress to enact changes to its business model.

The Postal Service wants an end to Saturday mail deliveries, to create new and less costly employee health coverage plans and to get a refund for any postal overpayments to existing federal retirement programs.