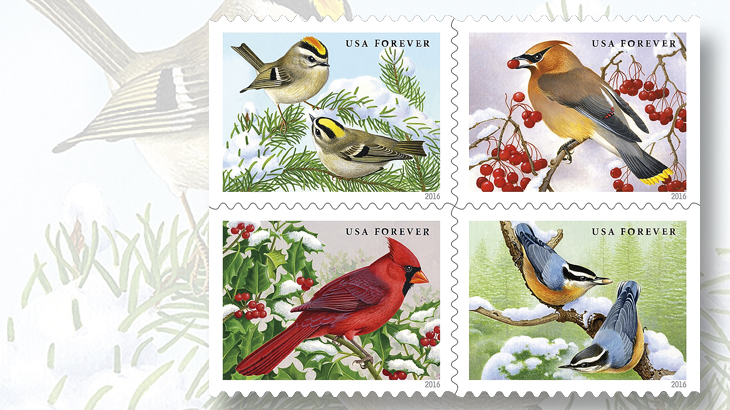 A set of four forever stamps depicting colorful songbirds in snowy scenes will be issued Aug. 4 with a ceremony at the American Philatelic Society’s annual Stampshow in Portland, Ore. 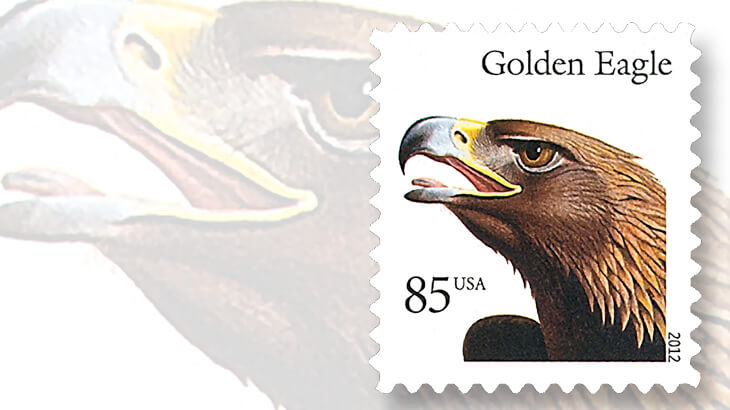 Artist Robert Giusti, who painted the four scenes for the new Songbirds in Snow stamps, has previously created other bird illustrations for U.S. stamps, including this dramatic portrait of a golden eagle for the 2012 Birds of Prey issue.
Previous
Next

The United States Postal Service is issuing a set of four Songbirds in Snow forever stamps Aug. 4 with a 1 p.m. first-day ceremony at the American Philatelic Society’s annual Stampshow.

The show is taking place Aug. 4-7 at the Oregon Convention Center in Portland, Ore. The show and the ceremony are free and open to the public.

The stamps will be issued in a double-sided pane of 20 stamps that the Postal Service calls a booklet.

The four nondenominated (47¢) forever stamps each show a different painting by Robert Giusti of colorful songbirds perched on snow-covered branches.

The first stamp shows a male golden-crowned kinglet (Regulus satrapa) at upper left and a female at lower right, on evergreen branches. The stamp for the cedar waxwing (Bombycilla cedrorum) shows a single bird perched on a cedar branch with red berries; the bird is holding one berry in its beak.

The final stamp depicts a pair of red-breasted nuthatches (Sitta canadensis) sharing a snow-covered branch against a background of distant trees.

The stamps do not show the names of the birds in the illustrations. The only text printed on the stamp face is “USA” and “Forever.”

In technical details published by the Postal Service, there was no mention of microprinting on these offset-printed stamps.

The new issue is the second double-sided pane of 20 stamps depicting fauna to be issued in the space of two days. The Pets set of 20 different stamps will be issued Aug. 2 in Las Vegas, Nev.

The Postal Service has featured Giusti’s illustrations of birds on numerous stamps during the past few years. In 2012, his artwork appeared on five 85¢ Birds of Prey stamps issued in a pane of 20 (Scott 4608-4612). His painting of a pair of tufted puffins was used to illustrate a single 86¢ stamp the following year (4737).

In a 2015 interview with the Happening in the Hills website, Giusti said that his artwork came to the attention of USPS art directors who spotted it in exhibitions and catalogs, and that he has since received many commissions for stamps.

The designer and art director for the new Songbirds in Snow set is Derry Noyes.

The four birds on these stamps are all native to North America, though some are more commonly seen than others.

The golden-crowned kinglet is comfortable in colder climates, according to the National Audubon Society, and likes to nest in dense forests, which can make it difficult to spot. It is also one of the smallest birds: the Cornell Lab of Ornithology describes it as “barely larger than a hummingbird.”

The Postal Service notes that the cedar waxwing gets its name from its favorite winter food, cedar berries, and for the red, waxy tips of some of its wing feathers.

“One of the few North American birds that thrives on a diet of mostly fruits, the cedar waxwing also consumes the winter fruits of juniper, mistletoe, and crabapple,” the Postal Service added.

The male Northern cardinal is particularly conspicuous with its bright red coloration, black face mask, golden orange beak, and pointed crest. The female is identical in shape and also wears the mask, but displays brown colors with subtle red highlights. The Northern cardinal ranges mostly in the Eastern United States and west into Texas, but also in Mexico and parts of Arizona.

The red-breasted nuthatch has a call that has been described as resembling the sound of a toy tin horn. It ranges throughout most of the United States, year-round in the North and during the winter in Southern regions.

Along with the double-sided pane of 20, the Songbirds in Snow forever stamps will be sold in uncut press sheets that have die cuts separating the individual stamps.

The press sheets consist of 160 stamps (eight panes of 20). The total number of press sheets made available to collectors was not revealed by the Postal Service.

The digital color first-day postmark for the Songbirds in Snow issue includes a larger image of a generic songbird with the word “Songbirds” superimposed upon it. The letter “o” in “Songbirds” is represented by a snowflake. This postmark is used on certain uncacheted first-day covers sold in a set of four by the USPS.

Technical details and first-day cancel ordering information for the Songbirds in Snow forever stamps issue can be found below.

Standard ordering instructions apply. Collectors requesting first-day cancels are encouraged to purchase their own stamps and affix them to envelopes. The first-day cover envelopes should be addressed for return (a removable label may be used), and mailed in a larger envelope addressed to Songbirds in Snow Stamps, United States Postal Service, Attn: Ruth Traynor, Box 2089, Portland, OR 97208-2089. Requests for first-day cancels must be postmarked by Oct. 4.

The Postal Service’s set of four uncacheted first-day covers for the Songbirds in Snow stamps is USPS item 681116 at $3.64. USPS item numbers for stamps and FDCs also appear in Linn’s 2016 U.S. Stamp Program.