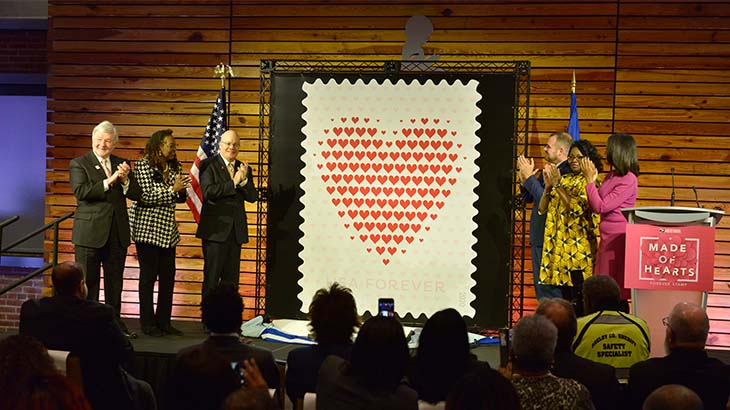 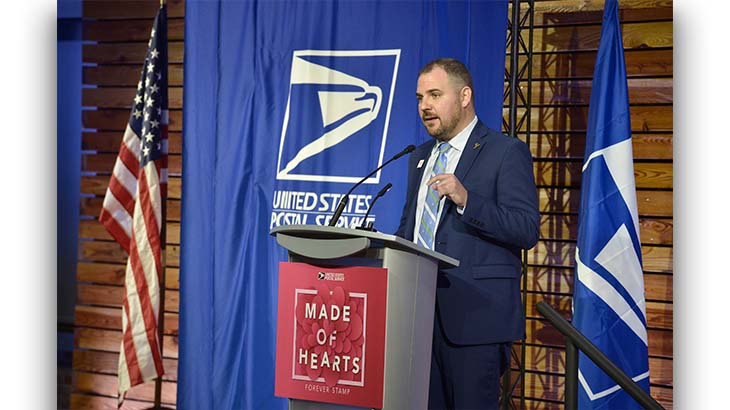 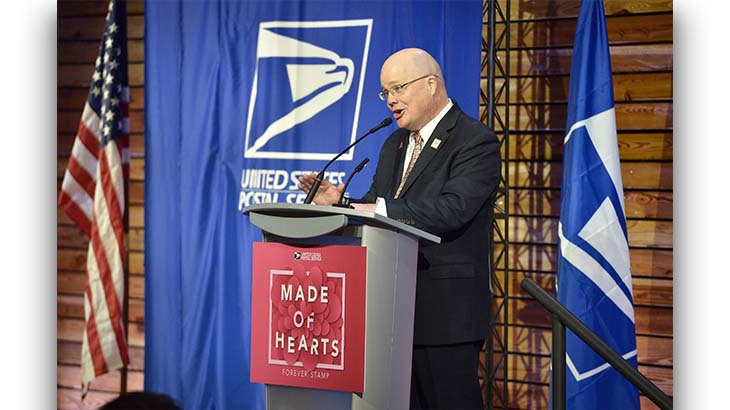 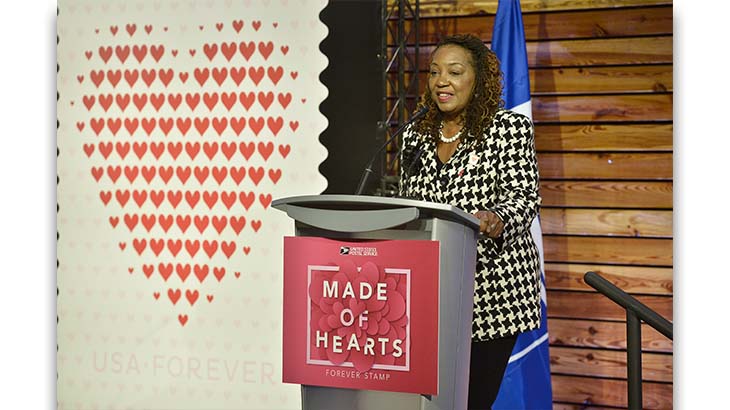 Monice Moore Hagler from the Philanthropic Black Women of Memphis urged all to “love first, and then unconditionally.” 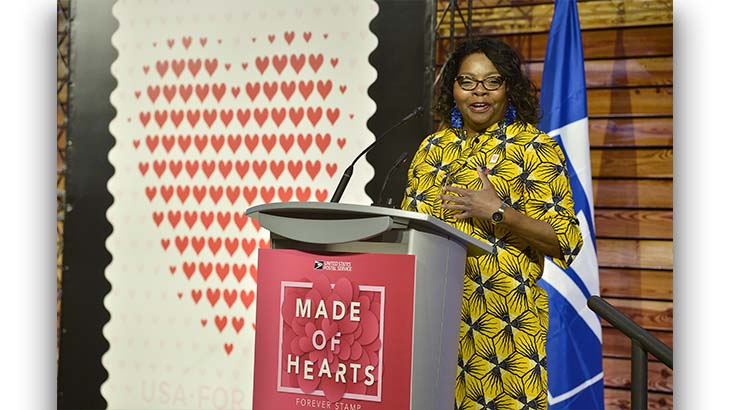 Melvina Young, a senior writer for Hallmark Greetings, read different expressions of love she has written for greeting cards.
Previous
Next

Awe-inspiring messages of love and charity were extended at the Jan. 23 first-day ceremony for the United States Made of Hearts Love forever stamp in Memphis, Tenn.

The U.S. Postal Service selected St. Jude Children’s Research Hospital as the location to reveal its newest Love stamp, and several dynamic speakers were on hand for the celebration.

“As an institution built on love and care, we are so honored that you chose St. Jude’s Children’s Research Hospital as the location to unveil the Made of Hearts Forever stamp,” he said.

St. Jude Children’s Research Hospital opened its doors on Feb. 4, 1962, but five years prior to that, Danny Thomas, the hospital’s founder, started the ALSAC.

“Danny founded ALSAC on the parable of the Good Samaritan to love and care for our neighbors, regardless of color or creed and with the sole purpose of raising funds and awareness that it would take to build St. Jude,” Froehlich said, adding that it remains the organization’s mission today, and it relies heavily on the USPS to carry out that mission.

“We recently expanded our reach through St. Jude Global on an initiative to raise child cancer survival rates for six of the most common types of childhood cancer from 20% today to at least 60% worldwide by 2030 — just 10 years from now,” Froehlich said. “And none of this would have been possible without the dedication of the men and women of the United States Postal Service.”

“The ground breaking work performed here has helped push survival rate for childhood cancer from 20% in 1962 to more than 80% today. That deserves a round of applause,” he said. “What you do here every day symbolizes love: love for life; love for our children; love for those less fortunate.”

The most generous city

Monice Moore Hagler from Philanthropic Black Women of Memphis (PBWM) offered a message of “love first, and then unconditionally.” PBWM is a group of nine women committed to giving back to the Memphis community. Hagler is deeply proud of her city’s love of philanthropy. “As a matter of fact, Memphis is ranked the most generous city in the United States,” she said.

“As we have celebrated Martin Luther King, Jr.’s life this week, it is appropriate to recognize his belief and expression of love,” she said. She continued by quoting Dr. King, who said: “I believe that unarmed truth and unconditional love will have the final word, so I have decided to love.”

The ceremony also included Melvina Young, an expert in African American history and culture, and a senior writer for Hallmark Greetings, where she has written hundreds of cards, internet content and a dozen books. In addition to her buttery-smooth, poetic words written for greeting cards, Young shared a story of her link to St. Jude Children’s Research Hospital. This connection occurred more than five decades prior, when her baby cousin suffered a life-threatening spider bite in the late-1960s.

“My family didn’t have any money, and it was still at the tail end of legal racial segregation when many institutions didn’t easily accept black children,” she said. “But one did: St. Jude’s Children’s Hospital, where my little cousin was taken in with compassion, humanity, empathy, and care — and his life was saved.”

“Look at love,” Young emphasized. “Look how it lifts, how it lightens the load, how it empowers, how it cures, how it saves, how it connects us — hearts to hearts.”

“So many great things have happened on this campus … and Danny had it down cold. Danny said ‘no child should die before its time,’” Hutson said. “As we think about the things that impact our lives, let us never, ever forget the power of giving, and let us remember the spirit of love, because that, of course, is what keeps us all together.”

Made of Hearts stamp to be issued Jan. 23 in Memphis