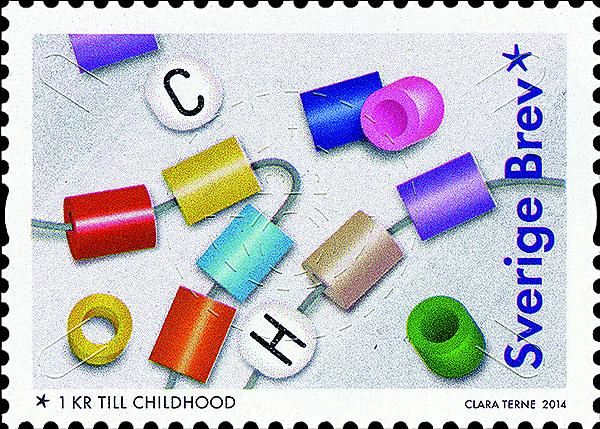 One of the two Swedish World Childhood Foundation semipostals issued on Jan. 16.

The foundation, commonly called Childhood, was founded in 1999 by Queen Silvia based on the United Nations Convention of the Rights of the Child.

The stamps are nondenominated with the inscription “Sverige Brev *.” The word “brev” is Swedish for letter, indicating that the stamps pay the domestic letter rate. The asterisk denotes the surtax, the extra amount to go to the charity.

The two self-adhesive stamps are sold in booklets of 10, with 10 krone from each booklet donated to the foundation.

According to information from Sweden Post, “Each bead has a different color and represents one of the articles of the U.N. Convention of the Rights of the Child. The beads are meant as a reminder of everyone’s right to a childhood.”