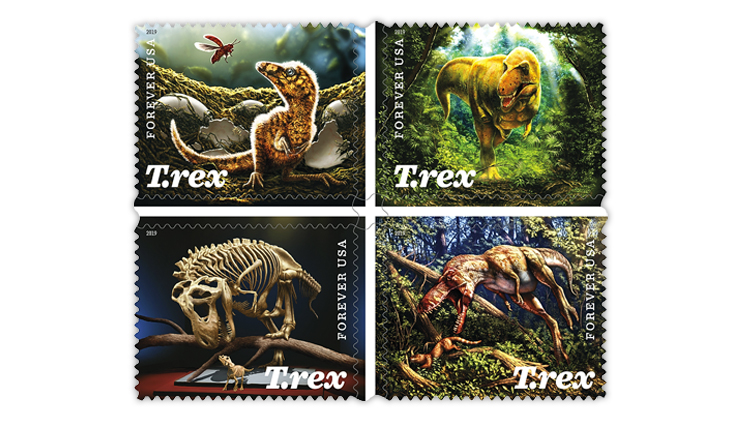 The United States set of four Tyrannosaurus Rex forever stamps will be issued Aug. 29, the U.S. Postal Service has announced.

The set of four United States Tyrannosaurus Rex forever stamps will have its first-day ceremony at the Smithsonian’s National Museum of Natural History.

The Aug. 29 event will begin at 11 a.m. in the Baird Auditorium at 10th Street and Constitution Avenue N.W. in Washington, D.C. The ceremony was originally scheduled to be held June 28, but, in mid-May, the U.S. Postal Service announced that it was being rescheduled.

Participating in the first-day ceremony will be Isaac Cronkhite, U.S. Postal Service chief human resources officer and executive vice president; Kirk Johnson, director of the Smithsonian National Museum of Natural History; Julius Csotonyi, a natural history illustrator who specializes in paleoart and scientific illustration and who created the original artwork for the Tyrannosaurus Rex stamps as well as artwork for the Smithsonian’s new dinosaur exhibit; and Matthew Carrano, curator of dinosauria at the Smithsonian National Museum of Natural History.

The stamps will be issued in a pane of 16.