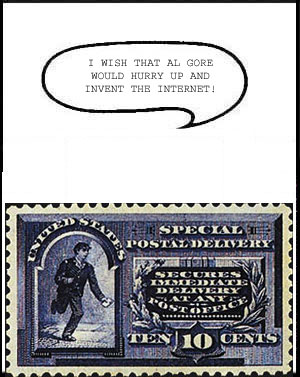 Paul Schumacher of Cherry Hill, N.J. is the winning philatelic line for the July cartoon caption contest featuring the new 10¢ special delivery stamp issue of 1885. The next contest will appear in Linn's Sept. 1 issue.

I apologize for the error in my July 7 column, in which the second special delivery stamp was identified as being the first design. The correct first issue is shown in Figure 4.

Many more entries than usual were received for the July contest, a large number of which assumed that there must be a dog, not seen in the picture, causing the messenger boy to be swift of foot.

An example by David Riley of Springfield, Ill., captures the thought with "Bad dog! Bad dog!"

Several entrants clearly felt the delivery boy's foot and leg pains, and suggested that the answer would be wheels of various sorts. Modern-day thinkers wanted one of those two-wheel Segway personal transporters. Traditionalists like John Nickle from Rusk, Texas, thought more along the lines of "I guess I'm never going to get that bicycle they promised me!"

A completely different tack was taken by readers who looked at the orientation of the figure and thought dance. Here's an example from Michael Intezo from Philadelphia, Pa.: "I call this the Twist."

The philatelic line winner brought the delivery boy into today's Postal Service, with the cost of fuel being a motivating factor: "I knew this would happen when gas went over $4, but why do I have to wear this old-fashioned uniform?" from George Crawford of Glen Rock, N.J.

On the nonphilatelic side, the winner, shown in Figure 4, is Paul Schumacher from Cherry Hill, N.J., who also has the messenger thinking well into the future.

"My horse is double-parked. I hope I don't get another ticket!" from Joe Timko of Vicksburg, Mich.

"I think I'll ask patrons to save these E1 covers for my retirement," by Peter Karpoff from Silver Spring, Md.

"Why does she mail special delivery to herself every day?" sent by Jo An Watson of Kalamazoo, Mich.

"Where's a Harley when you need one?" from Richard Ferrell in Salem, Ore.

"If they gave me a horse, this would be livery delivery," by James Williams from St. Petersburg, Fla.