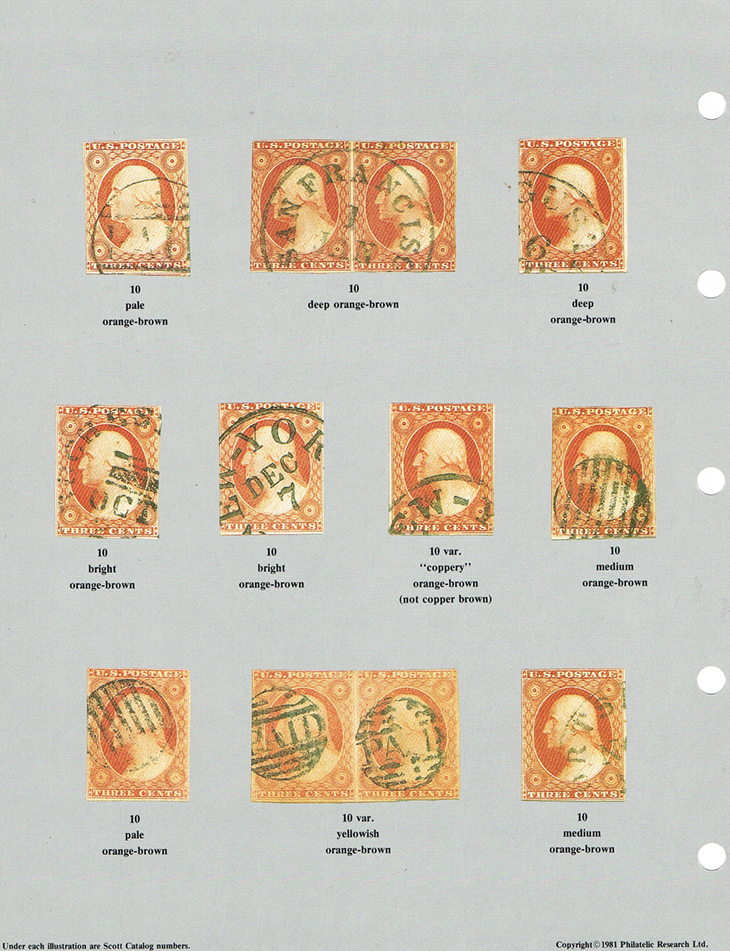 This color plate from the R. H. White Encyclopedia of the Colors of United States Stamps (1981) shows why this reference is the gold standard for determining colors of early U.S stamps. 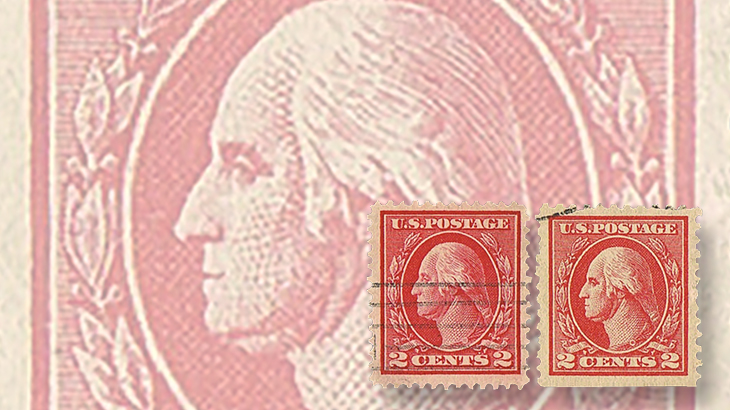 On the left is an engraved printing of the 2¢ Washington stamp, Scott design type A140. Note the crisp design elements and the richness of the color, compared to the offset version at right. 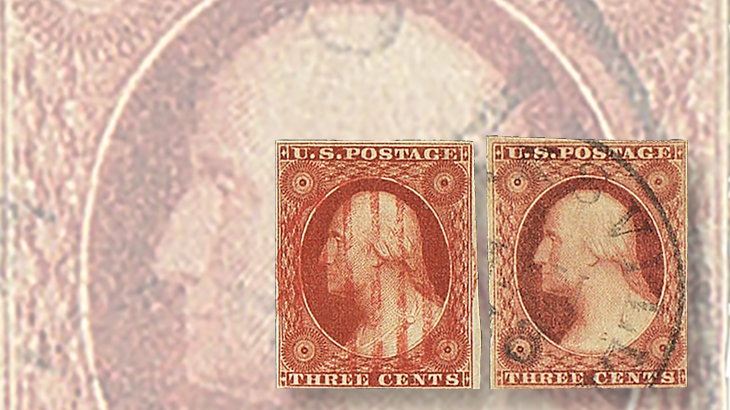 On the left is the orange-brown color of the 1851 imperforate 3¢ Washington stamp, Scott 10, as compared to the dull red Washington on the right, Scott 11.
Previous
Next

Linn’s readers have reacted to my expertizing columns, and I appreciate receiving questions and observations from you because this really is your column. In that spirit, let’s look at some of the mail.

Ed Bednar of Accokeek, Md., wrote about a 2¢ Washington stamp: “I recently bought an estate stamp collection from a former stamp dealer. In the collection is a stamp that was designated as A140, 2¢ Washington, perf 12x11-1/2, type IV. There is no such listing for that type of perforation but I have measured the perfs and it appears to me to be exactly that. Others have measured it and come to the same conclusion.”

There are two aspects that need to be dealt with in answering this question: One is the production of the stamp; the other is how a normal stamp might have been altered.

Scott Type A140 is correct, but there were two printing processes used to produce these stamps: engraving and offset. It is the latter that has design Types IV through VII, and all of these are perforated gauge 11 by 11. So, I believe the stamp under discussion is probably Scott 406, the engraved, perforated 12 by 12 stamp of 1912.

That leaves three possibilities in diagnosing the stamp: someone took an imperforate version of the offset Type IV stamp (Scott 532) and added fake perforations; it is the aforementioned Scott 406 that has been reperforated to hide flaws or a straightedge; or it is a normal variety due to paper shrinkage.

The reperforation would have to match on both vertical edges. As there would not normally be a need to do both edges, I lean toward the normal variety theory.

The Scott Specialized Catalogue of United States Stamps and Covers lists perforations in this era to the closest ½ millimeter. But stamps are not always like that. Take a handful of theses stamps and measure with a perforation gauge that includes tenths, and you will see some slight variation. This is not only due to the inexact gauge-12 perforation measurement in the catalog, but also due to shrinkage of the paper in production.

For the engraving process, the paper was wetted down so it could be pressed into the incised lines of the plate and pick up the ink in those lines. As the paper dried, minor shrinkage could occur.

While normally the drying was complete by the time the perforations were added, it is possible that this did not always happen, and the result would be some slight variation in the final perforation measurement.

Bottom line: The stamp is interesting and collectible, but one that is possibly faked; and even if genuine, it is not of great significance.

Todd Hause has a frustration that I’m sure many collectors share.

This is how he explains it: “As a collector of 19th century U.S. stamps, stationery and postal history, one area that has and continues to plague me, perhaps more than any other area of identification, is Color. I used to think I had a pretty good eye for color and then I started collecting stamps. I now own six or more different color guides that vary in cost from ten to a hundred dollars each. To make matters worse, the colors in and between these guides are as varied as the item I seek to identify.

“This leads me to my question. ‘How does an expertizer determine the color of a stamp or envelope?’ “

By way of answering, let’s first stipulate that the task of an expertizer is to determine whether a patient (the stamp being examined) does or does not match a given color — normally one that is listed in the catalog and within our experience. Thus, strictly speaking, we are not “determining color” except in a very narrow sense.

In fact, in 30-plus years as an expertizer, I can’t recall a single patient that came in with the question, “What color is this?”

The type of question I’m most likely to get is: “Is this 3¢ imperf 1851 Washington a Scott 10 (orange brown), or Scott 11 (dull red)?” The former has a significantly higher catalog value. (I am intentionally blurring the differences between Scott 10 and 10A and Scott 11 and 11A, as they are not for the most part germane to color.)

In dealing with the color question, we first need to come to a conclusion that the stamp submitted really is an imperforate example, and not an 1857 example with its perforations cut away.

Then we need to consider the fact that genuine Scott 10 stamps have to be from a certain plate, while the Scott 11 stamps were printed from different plates with different characteristics, so being able to plate these stamps is a good checkpoint.

As to color, I would compare the patient against known examples in my reference collection, and against the R. H. White Encyclopedia of the Colors of United States Postage Stamps (1981). This work includes color plates that are the gold standard for identifying colors on U.S. stamps. A sample of one of the color plates for Scott 10 is shown nearby.

In 95 percent of the cases, the answer is clear, but there are occasional stamps where color clarity is not to be had because the stamp has been altered on purpose or by accident. I think of the latter as “weathered,” such as prolonged exposure to sunlight or having had a mug of coffee spilled on it.

If a stamp has been altered, that has to be noted on the expertizer’s worksheet. And the determination of what catalog number it might be is a judgment call.

The rule of thumb for expertizers is that the stamp should be identified as the least expensive (most common) variety of the possibilities, unless the expertizer is certain otherwise.

But in those rare cases where there is no alteration and the color is not clear, and the plating is not clear as well, the expertizer has to decline an opinion as the standard has to be 100-percent certainty.

This is where there is special value in the team approach to expertizing, because having more than one pair of eyes on the patient can yield additional information.