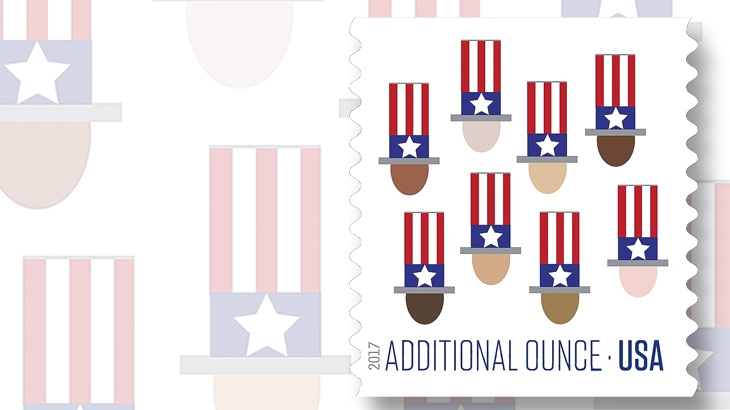 A United States nondenominated (21¢) stamp fulfilling the rate for an added ounce of letter mail will be issued Feb. 18. The design shows eight faceless heads in different shades, each wearing a representation of Uncle Sam’s Hat. 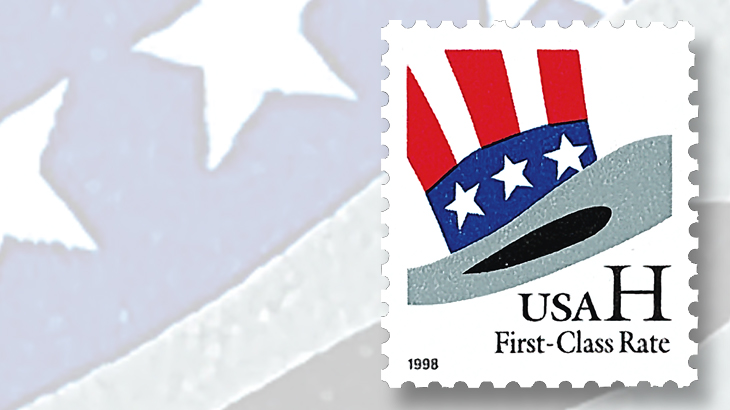 Uncle Sam’s Hat was featured on nondenominated (33¢) letter-rate stamps issued in 1998. A similar postcard-rate stamp with a yellow background was printed but never officially issued; some examples have been found by collectors. 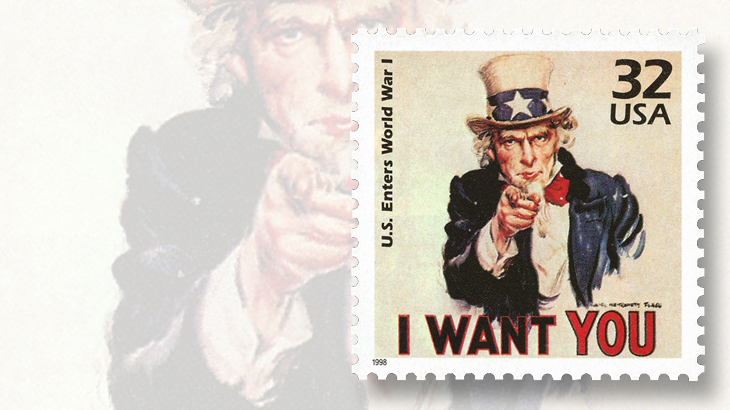 The 1998 Celebrate the Century set commemorating the 1910s included this 32¢ stamp featuring the classic artwork showing Uncle Sam as the face of the U.S. government. 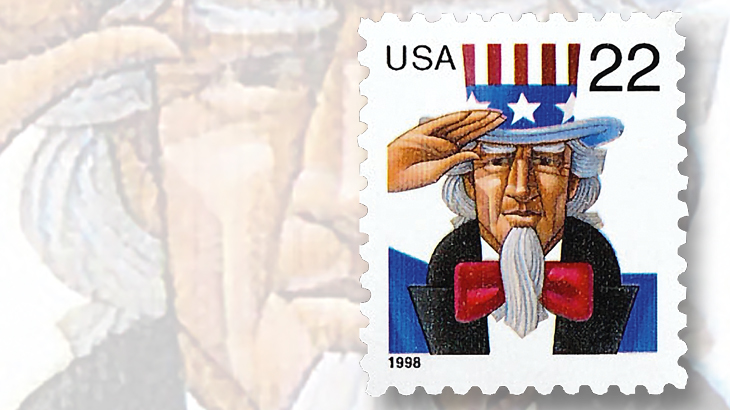 Uncle Sam was featured on a 22¢ stamp, also issued in 1998, to fulfill a coming increase in the additional-ounce rate. The stamp was eventually offered in three different varieties.
Previous
Next

The new stamp fulfills the postage rate for an additional ounce of postage beyond the 49¢ rate for the first ounce of domestic letter mail.

“Like a forever stamp, this stamp will always be valid for the rate printed on it,” the United States Postal Service said.

The stamp will be issued in a pane of 20, printed by Banknote Corporation of America using offset lithography with microprinting.

It is being issued with a first-day ceremony in the Phoenix suburb of Mesa, Ariz., as part of the Aripex stamp show taking place Feb. 17-19.

Admission to the show is $5, good for all three days. Parking is free.

“The stamp features eight graphic top hats in Uncle Sam’s signature style,” according to the Postal Service, “with red and white vertical stripes above a blue band with a white star and a gray brim. Beneath each hat is an oval shape representing a face, each in a different shade, meant to suggest the ethnic and racial diversity of the United States.”

Recognizing the diversity theme, the Aripex show posted on its website an invitation for attendees “to feel free to wear a hat that exemplifies your cultural ethnic background or a hat that is significant to you,” with an added request that “We ask you to not wear any current political type hats at the ceremony.”

Although the Postal Service provided dimensions for a press sheet size in its technical details for the Uncle Sam stamp, there was no mention of a press sheet being made available for purchase.

The character of Uncle Sam has served as a patriotic symbol for the United States for many years.

One story about the origin of Uncle Sam traces back to Samuel Wilson, a meatpacker in Troy, N.Y., who supplied troops with provisions in barrels marked “U.S.” during the War of 1812.

The initials stood for “United States,” of course, but the troops affectionately attributed the food to “Uncle Sam.”

American artist James Montgomery Flagg (1877-1960) often painted patriotic scenes, and he developed an image of Uncle Sam for a World War I recruitment poster by painting his own portrait and adding a white goatee and a serious expression.

The pointing figure with the phrase “I want YOU for the U.S. Army” became an American icon, and was the first appearance of Uncle Sam on a U.S. postage stamp when it was featured in the Celebrate the Century commemorative series in 1998. The 32¢ stamp from the set marking the decade of the 1910s features the caption “U.S. Enters World War I” (Scott 3183i).

Just a few months later, Uncle Sam appeared again, this time on a 22¢ stamp issued Nov. 9, 1998, to fulfill the upcoming change of the additional-ounce rate in January 1999.

This saluting figure painted by David LaFleur shares a resemblance to Flagg’s iconic Uncle, as do most renditions of the patriotic symbol. The 22¢ stamp was issued in self-adhesive panes and coils (Scott 3259 and 3263, respectively), and reappeared as a coil with moisture-activated adhesive 11 months later (3353).

The same day that the 22¢ Uncle Sam stamp was issued, the Postal Service also issued multiple varieties of the H-rate Hat stamp that showed a rendition of Uncle Sam’s hat without any image of Sam himself.

A postcard-rate stamp with the Uncle Sam’s Hat design on a yellow background was printed but never issued; however, examples have been discovered by collectors in both used and unused condition. The variety is pictured and valued in the Scott Specialized Catalogue of United States Stamps and Covers. Because it was never issued, it is not assigned a Scott number.

Twenty years before Uncle Sam appeared on a stamp, he was featured on a 15¢ red embossed stamped envelope issued June 3, 1978 (Scott U581). Described by the Postal Service in its 1978 Philatelic Release No. 33 as “a stylized depiction” of Uncle Sam, the preprinted envelope stamp highlights the stars and stripes of the top hat, and extends those stars and stripes below the brim in lieu of Sam’s familiar face.

The Postal Service describes Uncle Sam on its retail website: “Uncle Sam’s dress and appearance have evolved since his first iteration, but certain distinguishing elements help make him instantly recognizable and timeless: a dress coat with long tails, red-and-white striped pants, white whiskers, a stoic expression, and a top hat. Looking like a wise, flinty old uncle not to be crossed in his patriotic uniform, Uncle Sam represents our nation’s values of liberty and strength.”

Technical details and first-day cancel ordering information for the Uncle Sam’s Hat stamp can be found in the box on this page.

Standard ordering instructions apply. Collectors requesting first-day cancels are encouraged to purchase their own stamps and affix them to envelopes. Envelopes must be franked with at least 49¢ postage. The first-day cover envelopes should be addressed for return (a removable label may be used), and mailed in a larger envelope addressed to FDOI — Uncle Sam’s Hat Stamp, USPS Stamp Fulfillment Services, 8300 NE Underground Drive, Suite 300, Kansas City, MO 64144-9900.

Requests for first-day cancels must be postmarked by April 18.

The Postal Service’s uncacheted first-day cover for the Uncle Sam’s Hat stamp is item No. 119716 at $1.14. USPS order numbers for stamps and FDCs also appear in Linn’s 2017 U.S. Stamp Program.