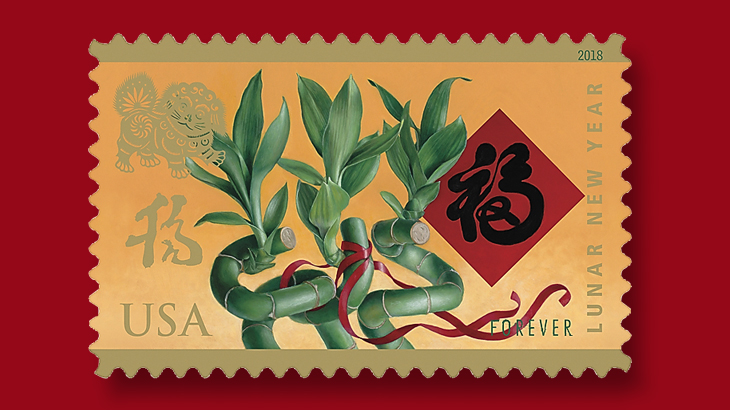 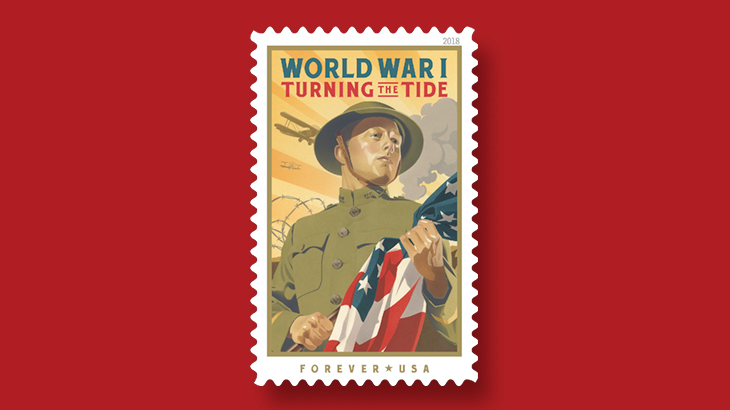 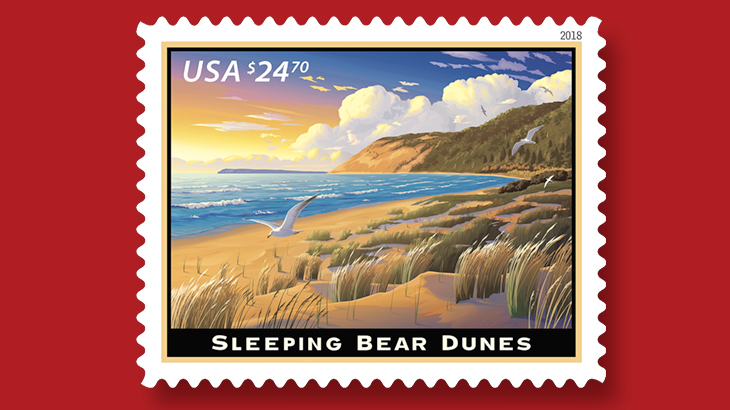 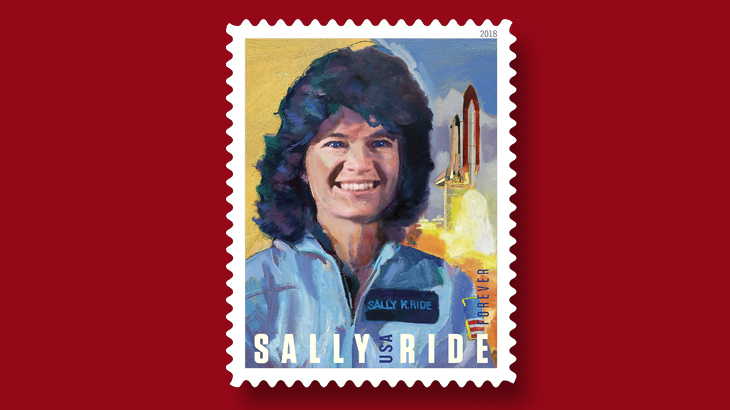 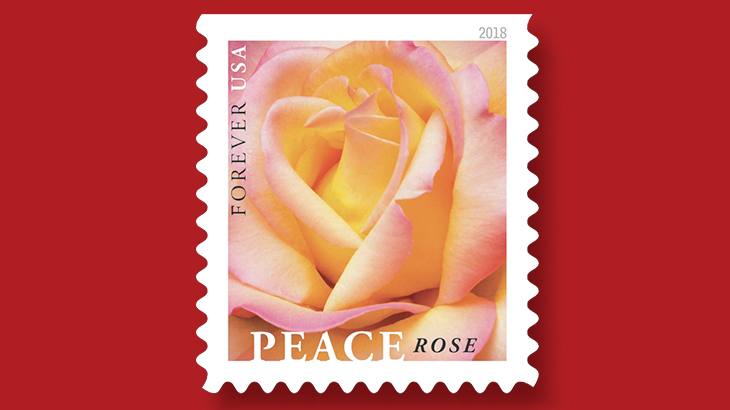 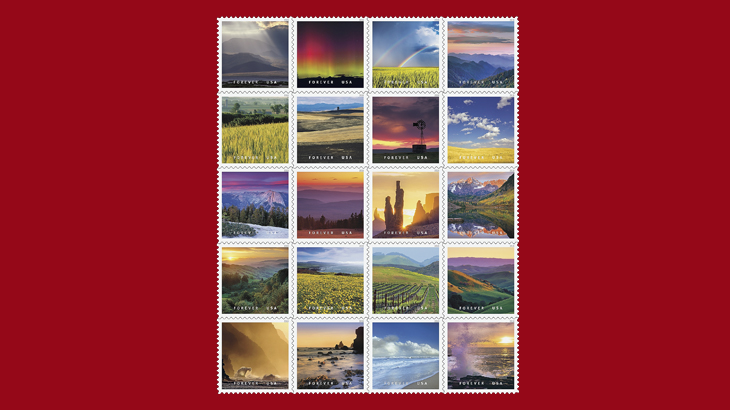 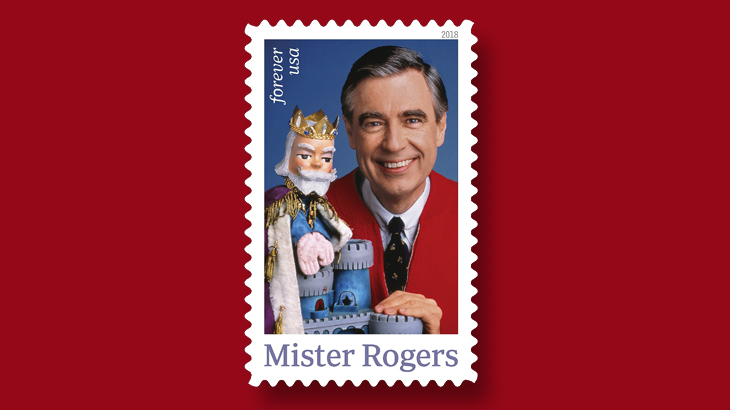 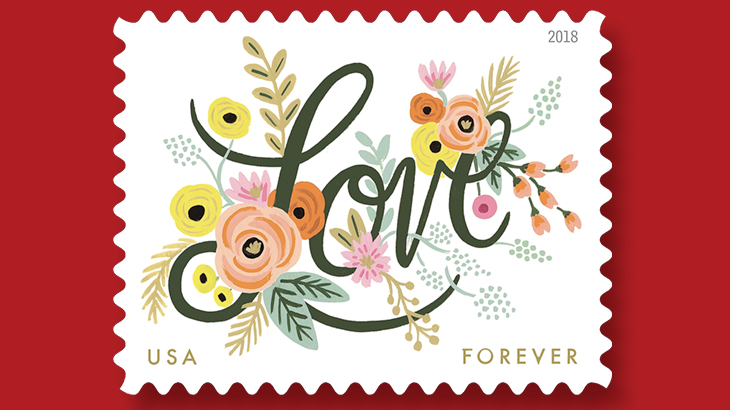 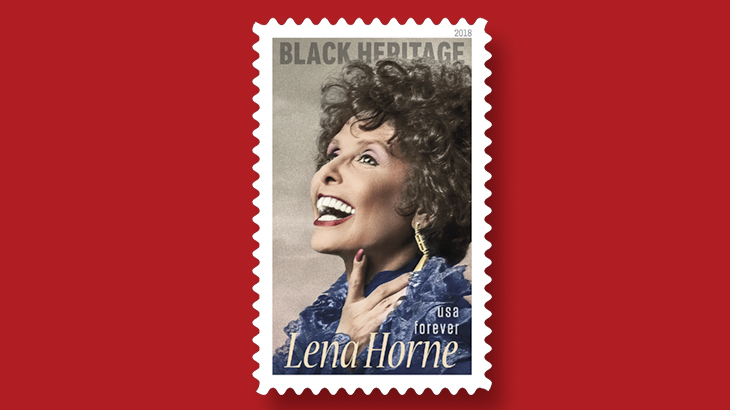 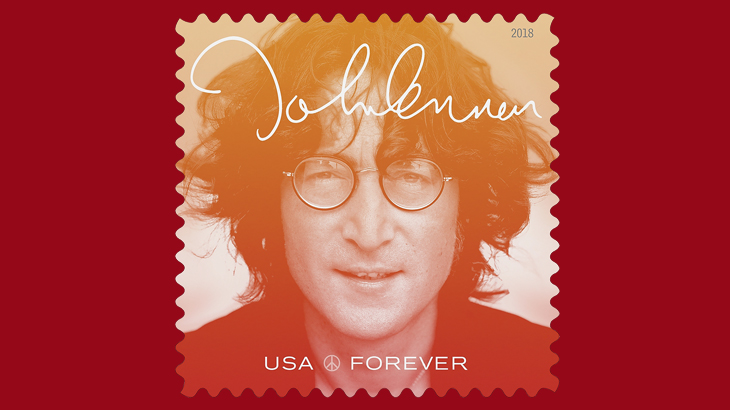 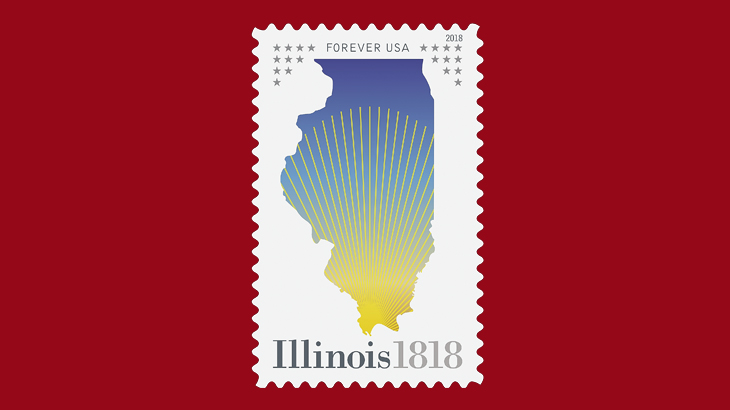 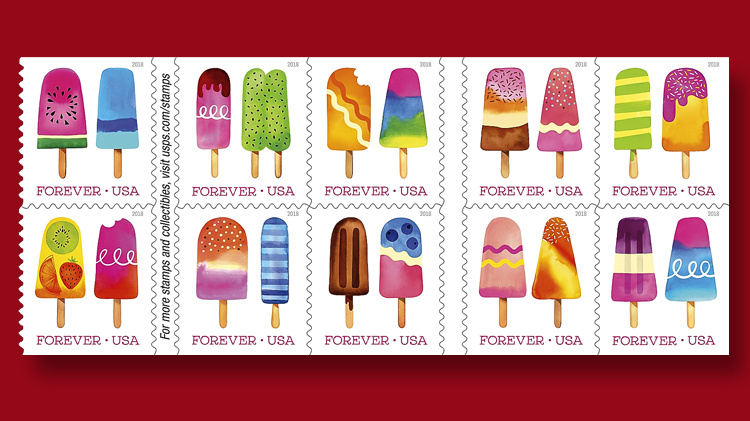 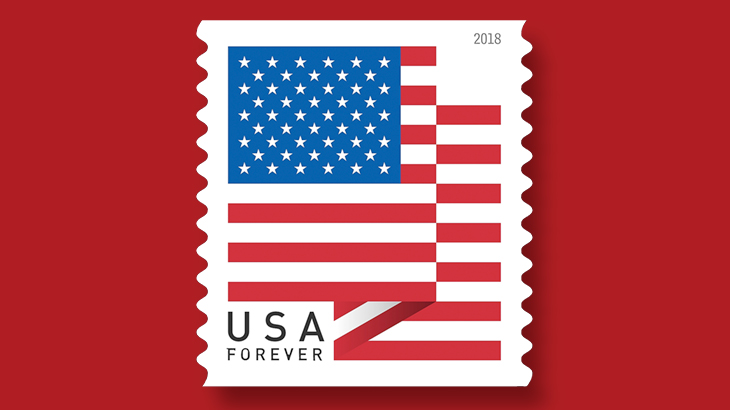 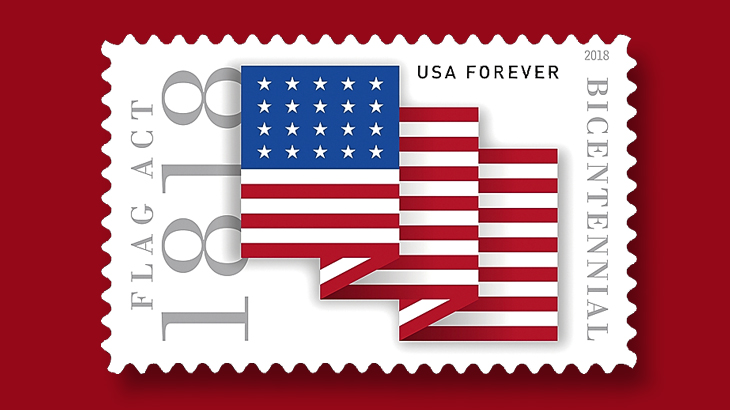 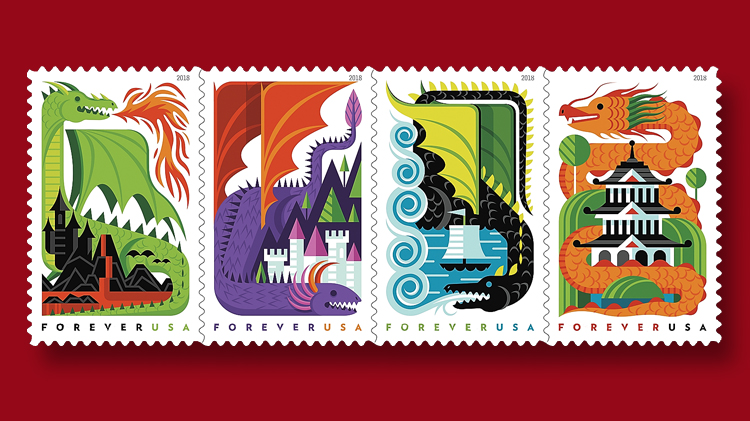 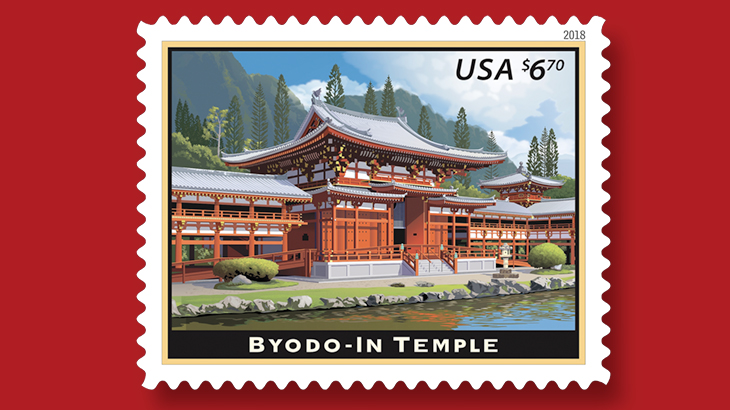 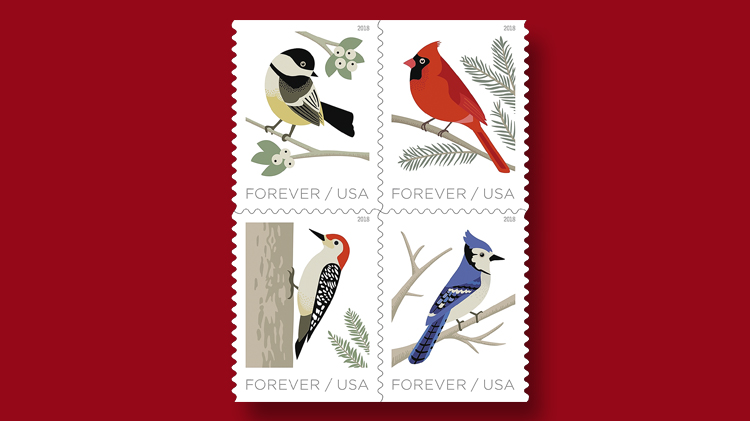 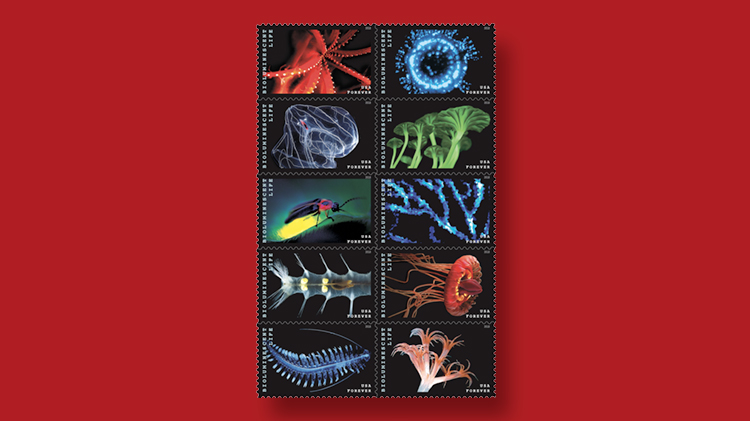 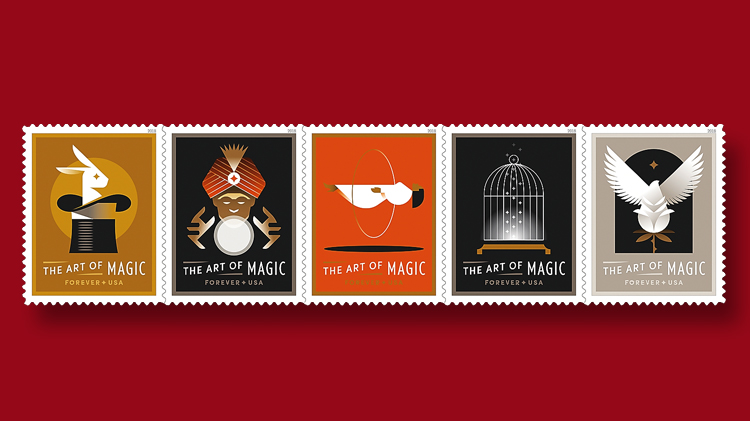 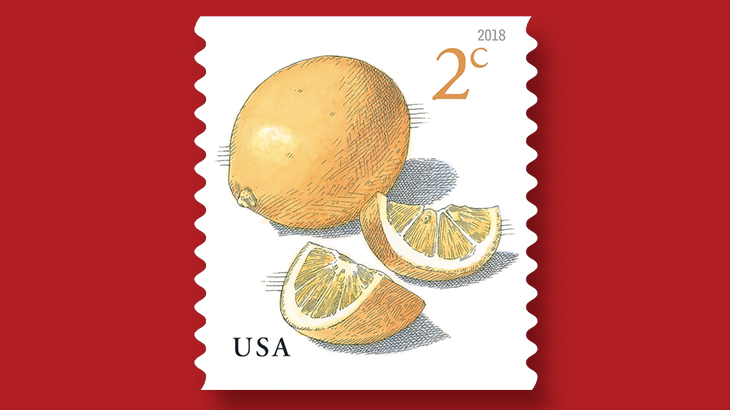 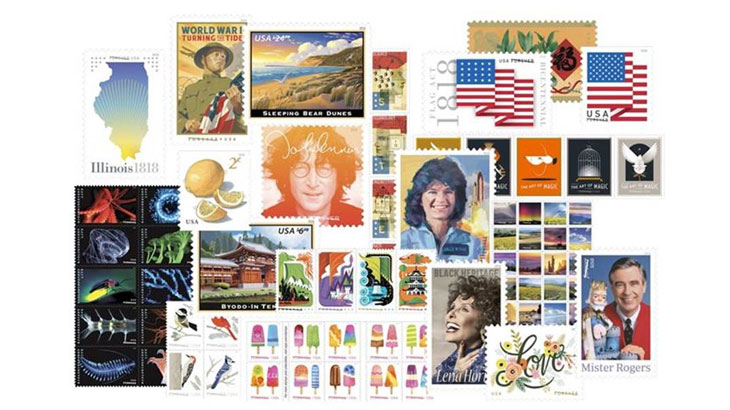 A selection United States stamps to be issued by the U.S. Postal Service in 2018.
Previous
Next

Musicians John Lennon and Lena Horne, television host Fred Rogers and astronaut Sally Ride will all be honored on United States stamps in 2018.

A single commemorative stamp will remember America’s important role as it joined the conflict in World War I.

The stamp designs provided with the announcement are preliminary and subject to change, according to the USPS. No issue dates or artist credits were offered.

Commemorative stamps will be issued to mark the bicentennials of statehood for Illinois and the 1818 Flag Act.

A set of 20 stamps captures photographic evidence of the beauty of America, “through images that correspond with one of the nation’s most beloved songs, America the Beautiful.”

Here is a summary of the planned stamp subjects revealed so far.

The 11th stamp in the ongoing Lunar New Year series of 12 features three bamboo plants and a red ribbon to commemorate the upcoming Year of the Dog.

Kam Mak has created the artwork for the Lunar New Year stamps in this series, which began in 2008.

The blue field on the flag in the design shows the 20 stars on the flag after the 1818 law was enacted.

Ten different forever stamps depict what the Postal Service describes as “frosty, colorful icy pops on a stick.” The graphic designs show two frozen treats side-by-side on each stamp, including a couple that have already been nibbled on.

Fred McFeely Rogers (1928-2003) remains one of the most beloved children’s show hosts of all time. As the gentle guide of Mister Rogers’ Neighborhood on public television for more than three decades, he entertained with a live-action mixture of stories, activities, songs and commentary on subjects that helped children learn about the world around them, and about people and places far away.

The forever stamp honoring “Mister Rogers” shows him smiling in his familiar red cardigan sweater, along with the hand puppet King Friday XIII presiding over his castle.

Pioneering astronaut Sally Kristen Ride (1951-2012) the first American woman to travel in space, will be honored on a forever stamp that features a smiling portrait with the liftoff of a space shuttle behind her.

Trained as a physicist, Ride was a crew member on the space shuttle Challenger on mission STS-7 in 1983. She flew into space once more, again on Challenger, in 1984 before leaving NASA three years later.

Using a design similar to that of the Flag Act of 1818 commemorative, a new definitive forever stamp shows today’s flag with 50 stars and 13 red and white stripes.

The stamp illustration is described by the Postal Service as a “striking graphic design of a flag with two crisp folds.”

The Postal Service notes that the Peace Rose stamp “celebrates one of the most popular roses of all time.

The stamp design shows a close-up photograph of the unfurling petals of the rose.

A 2¢ coil stamp showing a single Meyer lemon and two wedges of the cut fruit will join the Fruit definitive series that began Jan. 17, 2016, with the issuance of a self-adhesive 10¢ Red Pears coil (Scott 5039).

The illustration on the new 2¢ Lemon stamp appears to be the work of artist John Burgoyne, who has illustrated the various stamps issued in the series so far.

Ten stamps featuring examples of bioluminescence, the ability of a species to glow, will be issued in a pane of 20, according to details provided by the Postal Service.

The stamps show colorful examples of insects, plants and sea creatures against a black background. The individual life forms are not visibly identified by name on the stamps picturing them.

A forever stamp marking the 200th anniversary of Illinois statehood is planned for 2018. The stamp shows an outline map of the state filled in with blue color and glowing golden rays rising up from the south.

Twenty small stars in two groups of 10 appear in the upper corners, perhaps representing the 20 states of the Union welcoming Illinois as the 21st state on Dec. 3, 1818.

The largest set of stamps for 2018 revealed thus far is titled O Beautiful by the Postal Service. The 20 designs reflect phrases from the song America the Beautiful, including spacious skies, amber waves of grain, purple mountains and shining seas.

Each scene is an artistic photograph; the individual stamps show no inscription other than “forever” and “USA.”

A forever stamp honoring singer, songwriter and musician John Lennon (1940-1980) will be a new entry in the USPS Music Icons commemorative series. The stamp design shows a monochromatic photograph of Lennon looking directly at the camera, with his signature in white across the top of stamp.

Though born in Liverpool, England, Lennon moved permanently to the United States in 1971. After a decade as a founding member of the Beatles, Lennon continued to perform as a solo artist until his death in 1980.

The Postal Service describes the dragons as “the high-flying, fire-breathing mythological creatures that have roamed our imaginations for millennia.”

A floral design and cursive lettering make up the next Love stamp, called Love Flourishes by the Postal Service.

Painted buds and blooms with leaves and stems surround the word “Love” that extends across the center of the stamp design.

The Art of Magic

A pane of 20 stamps in five designs will celebrate the art of magic with digital illustrations of “five classic tricks magicians use to amaze and delight audiences: a rabbit in a hat (production), a fortune teller using a crystal ball (prediction), a woman floating in the air (levitation), an empty bird cage (vanishing), and a bird emerging from a flower (transformation).”

Each stamp design includes the inscription, “The Art of Magic.”

A $6.70 stamp depicting Byodo-In Temple in Hawaii continues the American Landmarks series. The illustration appears to be the work of Dan Cosgrove, who has exclusively contributed artwork to the stamp series since it began in 2008.

The non-practicing Buddhist temple on the island of Oahu has been designated as a Hawaii state landmark.

Sleeping Bear Dunes on the northwestern coast of Michigan’s lower peninsula will be depicted on a $24.70 stamp fulfilling the rate for Priority Mail Express that will go into effect Jan. 21.

The Sleeping Bear Dunes National Lakeshore is overseen by the National Park Service.

A stamp honoring entertainer and civil rights activist Lena Horne (1917-2010) will be the 41st stamp in the Black Heritage commemorative series.

“Remembered as one of America’s great interpreters of popular songs,” the Postal Service stated, “Horne also was a trailblazer in Hollywood for women of color. She used her personal elegance, charisma and fame to become an important spokesperson for civil rights.”

A set of four forever stamps will celebrate the components of STEM education: science, technology, engineering and mathematics.

“Designed to pique the curiosity of the viewer, each of these four stamps features a collage of faces, symbols, drawings and numbers that represent the complexity and interconnectedness of the STEM disciplines,” according to the Postal Service.

World War I: Turning the Tide

A forever stamp with the inscription “World War I, Turning the Tide,” shows an American doughboy holding the U.S. flag as the war rages behind him.

The Postal Service describes the stamp as a tribute to the sacrifice of American soldiers and millions of supporters on the home front as the nation entered World War I, and helped turn the tide of war in favor of the Allies.