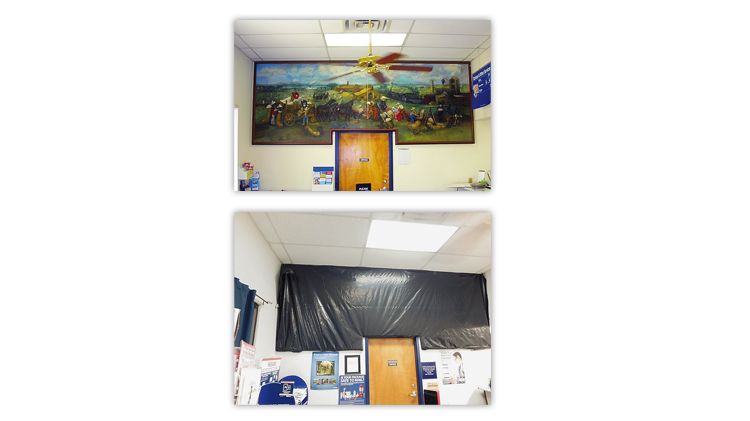 In these two photos, taken in 2008 and 2020, respectively, the 1940 mural Cotton — From Field to Mill in the post office in Jackson, Ga., is shown on display and covered with a tarp. The U.S. Postal Service has ordered that murals in 16 post offices acros

A blog dedicated to the nation’s post offices is reporting that a high-level United States Postal Service committee has ordered lobby murals in 16 post offices in 12 states to be covered.

The Postlandia blog, written by Evan Kalish of Queens, N.Y., says that postal officials offered no explanation for the action, which Kalish called unprecedented. The officials did not say whether other murals might be covered.

The blog shows photos of the 1940 mural Cotton — From Field to Mill in the Jackson, Ga., post office, which is now covered by a plastic tarp.

An Aug. 21 statement from Sheila T. Meyers, a USPS manager of government relations in Washington, D.C., that the blog cited says: “While it is the policy of the Postal Service to preserve and protect the historic artwork in its collection for future generations, we are mindful that certain murals generate strong feelings for some of our employees and customers.”

“With that in mind, discussions are being held on how to properly handle and safeguard the future of those pieces. We are evaluating each of the pieces and we will work to ensure that appropriate action is taken on select murals, if deemed necessary.”

There are 1,400 paintings and sculptures in the nation’s post offices, many of which date from a New Deal fine arts program, according to Kalish.

In the past, some murals have been attacked over their depictions of Native Americans and African-Americans.

Kalish, who describes himself as a postal enthusiast who has visited 10,000 U.S. post offices, said he was unable to learn what committee is studying the artwork, who appointed it or why particular murals were selected for review.

In addition to the Cotton — From Field to Mill painting in the Jackson, Ga., post office, here are the other murals and their post office locations the blog said are under review:

According to the blog, post offices in Greensboro, Ga., Natick, Mass., and Wayne, Pa., where there have been recent controversies over how Native Americans are depicted in other murals, are not included in the current review.

There are two murals in the Greensboro, Ga., post office: The Burning of Greensborough (which is not presently under review) and Cotton Picking in Georgia.