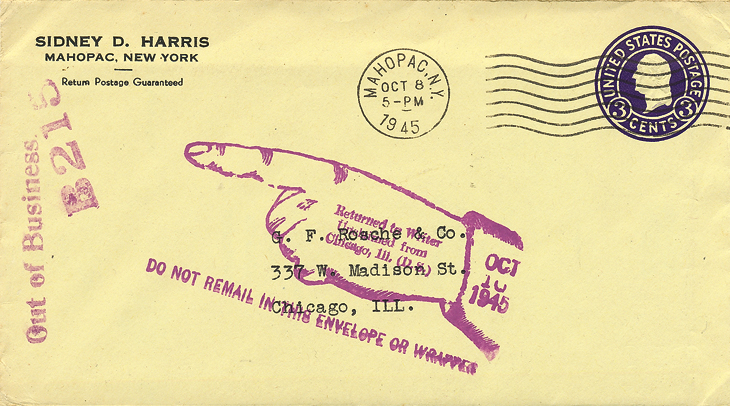 This Oct. 8, 1945, letter was undeliverable because the addressee was “Out of Business.” It was returned to the sender with a warning applied not to remail it in the same envelope.

Because I ask, or am asked, numerous questions about the functions of the United States Post Office Department, I am fortunate to have available a number of official publications that somehow or other relate to those functions.

The first two resources, the Postal Bulletin and the PL&R, are available online and free on my website, which is now hosted by the American Philatelic Society at www.uspostalbulletins.com.

I am in the process of writing a new book that will contain, I hope, what many people in philately will consider to be a series of groundbreaking articles that utilize the various resources listed above. The book also will explain how to locate most of these resources.

For instance, I am visiting the U.S. Postal Service library in Washington, D.C., where I am scanning and preserving much pertinent postal history information in the Postal Manuals, both domestic and international, so that they can be placed online on my website.

This month’s column will consider one piece of information that I recently found in the 1907 to 1915 yearly volumes of the Official Postal Guides, and a similar announcement in the 1882 PL&R.

Over the years, I have seen a significant number of covers similar to the one illustrated here. This Oct. 8, 1945, letter, mailed in a 3¢ stamped envelope (Scott U439f) at the 3¢ domestic surface rate for up to one ounce, was undeliverable, as indicated by the Chicago carrier “B215” marking, because the addressee was “Out of Business.”

The letter was “Returned to Writer” on Oct. 10 with the admonition, “DO NOT REMAIL IN THIS ENVELOPE OR WRAPPER.”

I have searched high and low over many years to find a source for this admonition/regulation. I even have two such covers that, in spite of this notice, were remailed in the original envelope, with new postage.

I’m certain that there are other such remailings that I cannot recognize because a new envelope was used for the remailing.

Anyway, just by chance, I finally noted the following statement in the July 1913 annual volume of the U.S. Official Postal Guide under the category “Rates of Postage,” Section 29(g): “A letter which — after a proper effort has been made to deliver it — is returned to the sender, may not be remailed without a proper repayment of postage, and it should be enclosed in a new envelope, to secure proper transmission.”

This type of instruction is amazingly difficult to locate, but I even found a similar version in Section 413 of the 1882 PL&R (but in no other PL&R volume): “If the address of the person is insufficient, and the letter after being carried to the place designated is returned to writer as uncalled for, it cannot be remailed without a new payment of postage.”

Note that this statement makes no comment about reuse of the envelope or wrapper.

The first statement, finally located in the 1913 Official Postal Guide, successfully explains the handstamp “DO NOT REMAIL IN THIS ENVELOPE OR WRAPPER,” but I believe that the statement (also repeated in all the yearly Official Postal Guide volumes from 1907 to 1915) is ambiguous enough that the two examples I have found that were remailed with new postage, but in the original envelope, are legal. And the 1882 PL&R statement has no ambiguity at all in regard to not requiring a new envelope or wrapper.

In any event, I was overjoyed to finally find a reference that justifies the type of handstamp on the cover shown here.