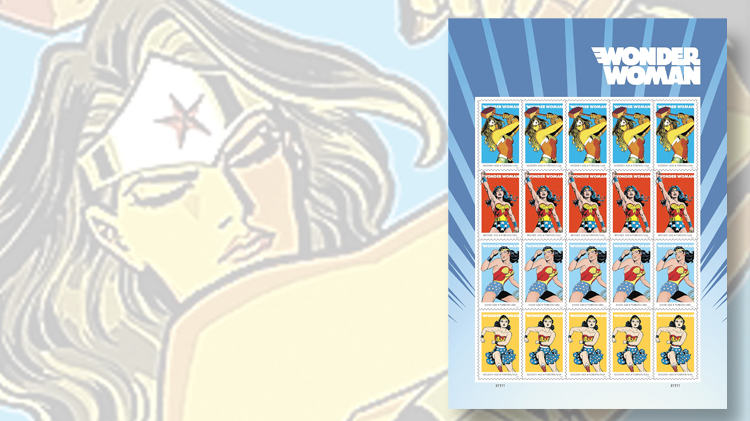 The United States Postal Service will issue a pane of 20 forever stamps with four designs in New York City on Oct. 7 to honor DC Comics superhero Wonder Woman on her 75th anniversary. 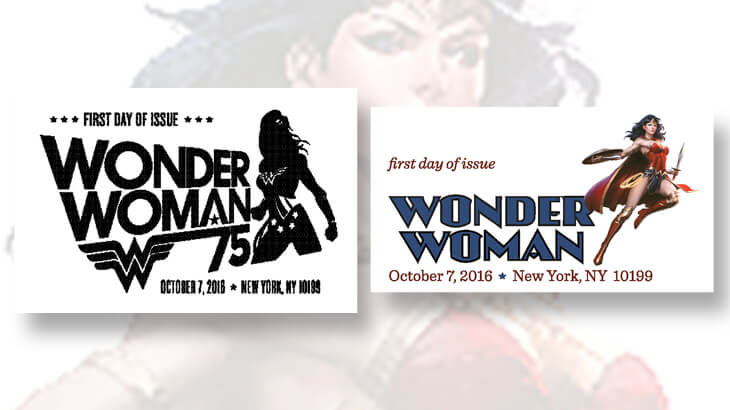 The United States Postal Service will provide two pictorial Oct. 7 first-day cancels for the Wonder Woman stamps that show her in an all black marking, and in a digital color postmark. 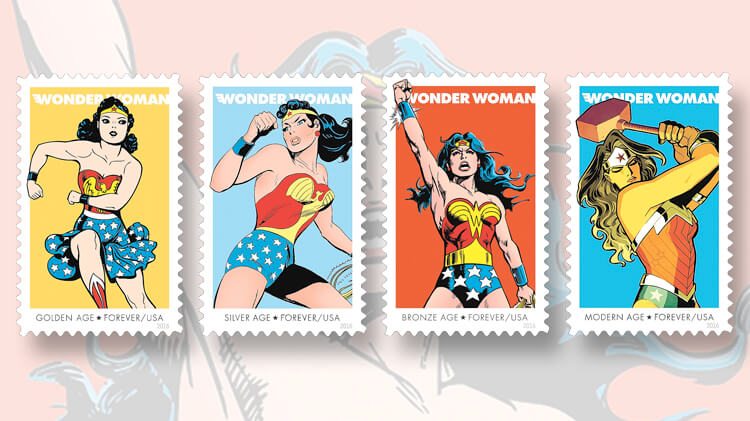 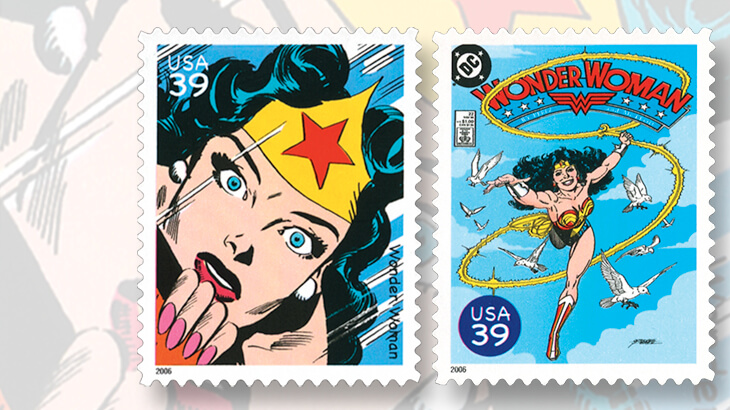 The United States Postal Service will commemorate the 75th anniversary of comic book superhero Wonder Woman with a pane of 20 forever stamps in four designs.

The stamps will be issued Oct. 7 during a first-day ceremony in New York City. The event is scheduled to take place at 9 a.m. at the Jacob K. Javits Convention Center, 655 W. 34th St., prior to the opening of the New York Comic Con fan event.

The Postal Service announced Sept. 15 that it would provide a limited number of free tickets for the Wonder Woman stamps first-day ceremony.

Ticket requests are limited to one per individual, and will provide access to the stamp ceremony, but not to the Comic Con.

Collectors interested in attending are asked to respond online.

The tickets are being distributed on a first come, first served basis.

Friday tickets for the Comic Con, which runs Oct. 6-9, are sold out.

The Wonder Woman stamps will also go on sale at post offices nationwide on Oct. 7.

Wonder Woman is one of the earliest DC Comics superheroes. The publishing company can trace its roots back to National Allied Publications in 1934, and Wonder Woman debuted in issue No. 8 of All Star Comics on Oct. 21, 1941, two years after the first appearance of Batman and three years after the comic debut of Superman.

Wonder Woman was originally presented as an Amazon princess who rescued injured American military pilot Steve Trevor, whose plane crashed on her hidden island home, and returned with him to the United States.

With Amazonian skills, mystic powers, and great strength, she adopted the secret identity of Diana Prince while fighting for justice as Wonder Woman. She wears Amazonian bracelets that she can use to deflect bullets, and wields a lasso of truth that forces anyone captured in it to tell the truth. Her original arsenal also included an invisible plane.

In 1960, Wonder Woman was a founding member of the Justice League of America, a collaboration of some of DC Comics’ greatest heroes that also included Superman, Batman, the Flash, Green Lantern, Martian Manhunter, and Aquaman.

Along with her 75-year history in comic books, Wonder Woman had her own live-action television series in the 1970s, starring actress Lynda Carter.

More recently, actress Gal Gadot portrayed Wonder Woman in the 2016 movie Batman v Superman: Dawn of Justice. Gadot will also star in a Wonder Woman feature film in 2017, and will have an important role in the live-action Justice League film later next year.

Wonder Woman has also been a popular character in the Justice League animated series.

The new Wonder Woman stamps are coming out almost two years to the day after the set of eight Batman stamps (Scott 4928-4931) was issued at the same annual New York Comic Con event. The Batman stamps also celebrated that DC Comics character’s 75th anniversary, and also featured four stamps showing how the character has evolved.

Collectors will be able to purchase press sheets of the Wonder Woman stamps consisting of 180 stamps (nine panes) at face value for $84.60. The total press sheet quantity was not revealed by the Postal Service.

The Postal Service will also sell first-day covers of the Wonder Woman stamps in sets of four with pictorial postmarks in black or full color.

Technical details for the Wonder Woman stamps, and first-day cancel ordering information, can be found below.

Standard ordering instructions apply. Collectors requesting first-day cancels are encouraged to purchase their own stamps and affix them to envelopes. The first-day cover envelopes should be addressed for return (a removable label may be used), and mailed in a larger envelope addressed to Wonder Woman Stamps, Stamp Fulfillment Services, Cancellation Services, 8300 NE Underground Drive, Pillar 210, Kansas City, MO 64144-9998.

Requests for first-day cancels must be postmarked by Dec. 7.