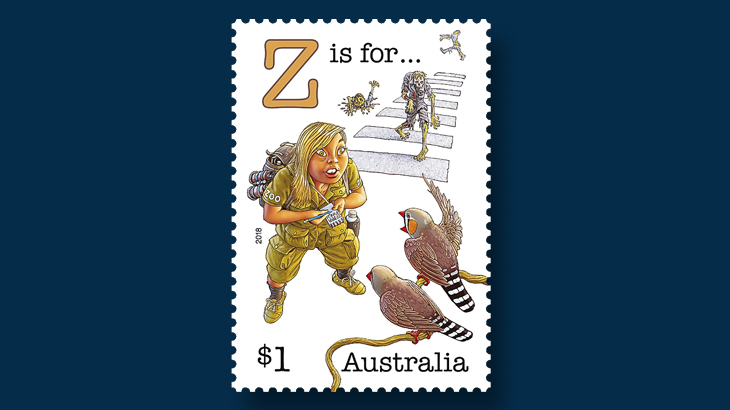 Zombies, including one at a zebra crossing, are pictured on a new Australia Post stamp representing the last letter of the alphabet, Z.

How many words can you think of that begin with a Z? That is the question answered by a new stamp in Australia Post’s stamp series called Fair Dinkum Aussie Alphabet. (Fair dinkum is Aussie slang for “real” or “genuine.”)

And, one of the answers is zombies, three of which can be seen in the upper part of the cartoonlike stamp design next to the inscription “Z is for … ”

In keeping with the Z theme, one of the zombies is even staggering across a zebra crossing (a pedestrian crossing with alternating stripes of black and white).

The design of the Z stamp also depicts a zebra finch and a zoologist who has the word “zoo” on her uniform and is identifying the birds as “zebra finches” on her notepad.

In a blog post about the new stamps, Australia Post described this design as “an over-zealous zoologist has zigzagged past some zombies to zoom in on two dazzling Zebra Finches.”

The Fair Dinkum Aussie Alphabet series, which started March 1, 2016, explores the “unique brand of Aussie humour,” as well as the country’s cultural icons, people, places, fauna, flora and more, according to Australia Post.

Gavin Ryan, an Australian artist now based in Bali, has designed all of the stamps in the series.

The latest set was released Sept. 18. In addition to Z, this set explores items that begin with the letters E, O, X and Y.