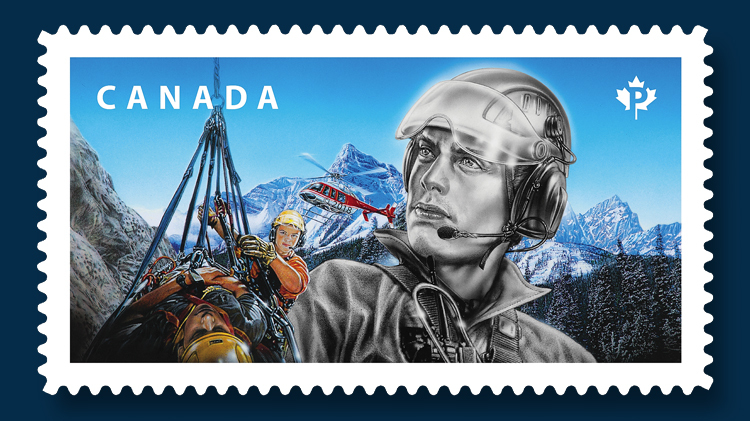 This stamp for Canadian search and rescue experts was unveiled in Banff, Alberta, a town within Banff National Park located in the Rockies. 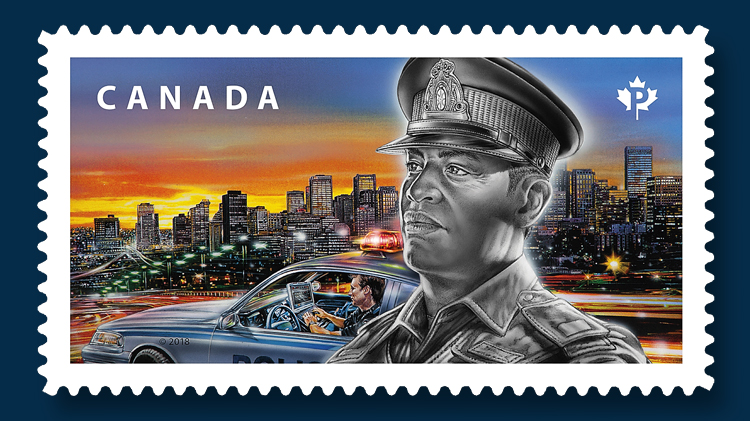 Canada Post offers gratitude for all civilian and sworn members of the country's police forces with this stamp design. 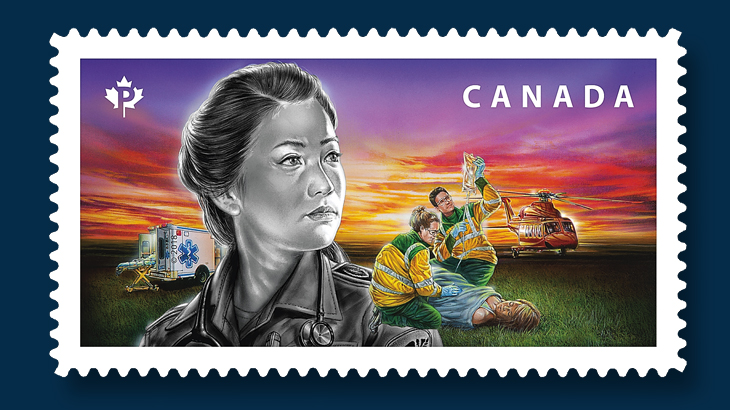 Stamp designers consulted with the Paramedic Association of Canada, which represents more than 20,000 practitioners, to ensure this image of paramedics tending to a woman in need of emergency medical care is an accurate depiction of this group. 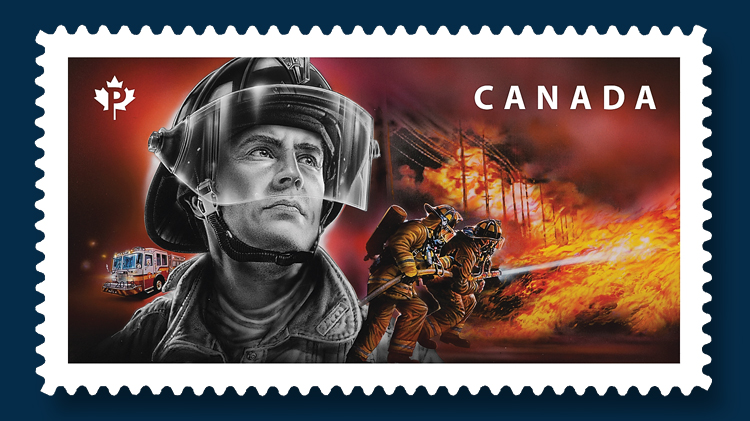 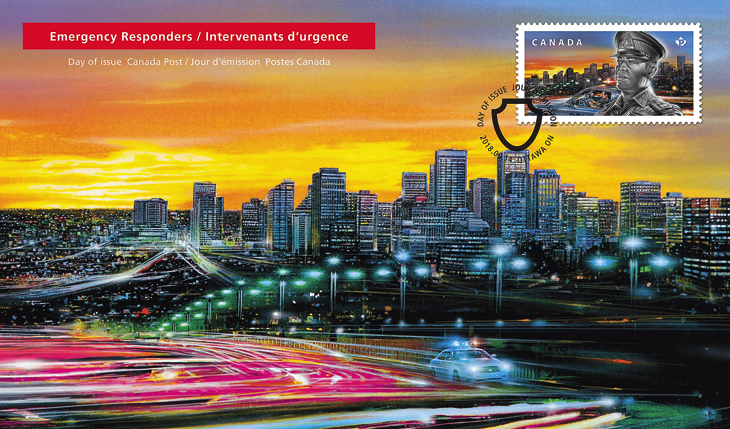 Pictured here is the first-day cover for the stamp honoring police officers. Canada Post is issuing five official FDCs, one per stamp. Each pictorial cancel shows an item related to the responder and is postmarked in the location of the stamp unveiling. 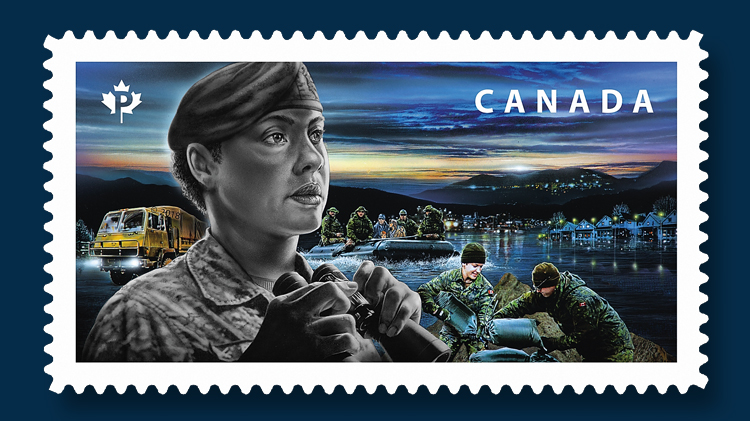 Five different groups of first responders are displayed on a new set of stamps issued Sept. 14 by Canada Post.

The new Emergency Responders designs were unveiled the week of Sept. 10, one per day, at different locations throughout the country.

The set includes five nondenominated permanent-rate stamps paying the basic domestic rate (85¢) produced in two formats: as self-adhesives in a booklet of 10 (two of each design), and in a souvenir sheet of five with moisture-activated gum.

The stamp dedicated to the paramedics who provide lifesaving medical care was unveiled at the Ambulance New Brunswick headquarters in Fredericton on Sept. 10. Stamp designers consulted with the Paramedic Association of Canada, which represents more than 20,000 practitioners, to ensure the image of paramedics tending to a woman in need of emergency medical care is an accurate depiction of this group.

In the press release announcing the stamp, Canada Post praised the medics for their courageous work in saving countless lives.

“They attend virtually any situation — from heart attacks, drug overdoses, trauma events, and incidents involving multiple casualties. Once dispatched to an emergency, paramedics have some daunting expectations to meet, including arriving quickly, assessing and treating their patients with urgency, expertise and empathy, and co-ordinating with other emergency responders.”

The Canadian Armed Forces (CAF) are celebrated on the second stamp, unveiled at 2nd Canadian Division Support Base Valcartier, near Quebec City on Sept. 11. Members from this base have assisted in Operation LENTUS missions, including the spring 2017 floods in Quebec.

A Canada Post press release listed CAF achievements so far this year: in August, almost 600 forest fires in British Columbia; May, the evacuation of 140 people threatened by fire in Manitoba, and flood relief in British Columbia and New Brunswick; and April, floods at Kashechewan First Nation in Ontario.

“Trained in engineering, health services, aviation, logistics and the use of specialized equipment, they conduct evacuations, deliver aid, provide transportation, execute search and rescue missions, among many other tasks,” the release said.

The third design was unveiled in Banff, Alberta, a town within Banff National Park located in the Rockies along the Trans-Canada Highway. This stamp honoring search and rescue personnel shows a perilous helicopter rescue taking place in the mountains.

“Whether from the Canadian Coast Guard, Canadian Armed Forces, Parks Canada or a provincial, territorial or volunteer organization, these elite experts do their best to find and save those who are lost, hurt or stranded.”

The design for firefighters was unveiled Sept. 13 in Halifax, Nova Scotia, with the participation of Halifax Regional Fire and Emergency, Canada’s oldest firefighting department, established in 1754. The stamp depicting two responders heading toward a blaze is dedicated to all of the part-time, full-time and volunteer firefighters who rush into action at the drop of a hat.

Canada Post and the stamp designers consulted with the Canadian Association of Fire Chiefs, whose members represent roughly 3,500 fire departments, to ensure accuracy in the design.

The Ottawa Police Association in the nation’s capital of Ottawa, Ontario, was the location of the final unveiling stamp saluting police officers. “Canada is one of the safest countries in the world due in large part to the civilian and sworn members of our police forces, who perform critical – and often dangerous — work with compassion, integrity and professionalism,” Details magazine, Canada Post’s publication for collectors, stated, “Internationally respected for their expertise, our police officers are also deployed to countries around the world to assist in times of crisis.”

Canada Post and the stamp designers consulted with the Canadian Police Association, whose members represent roughly 60,000 police personnel from across Canada, to ensure the stamp represents policing accurately.

William Lam Design designed the five stamps and souvenir sheet, and Shiro Nishiguchi illustrated them. Colour Innovations printed them by five-color lithography in quantities of 400,000 booklets of 10 (Canada Post ordering number 414091111), and 80,000 souvenir sheets (404091107). The stamps measure 48 millimeters by 26mm, and the souvenir sheet is 160mm by 180mm. The booklet cover and selvage of the souvenir sheet show images representing all five stamps.

Canada Post is issuing five official first-day covers, one per stamp. Each pictorial cancel shows an item related to the responder and is postmarked in the location of the stamp unveiling. For example, the Fredericton cancel for the Paramedics stamp includes a stethoscope (414094131). Canada Post produced 11,000 of each FDC (set of five 4140941131).