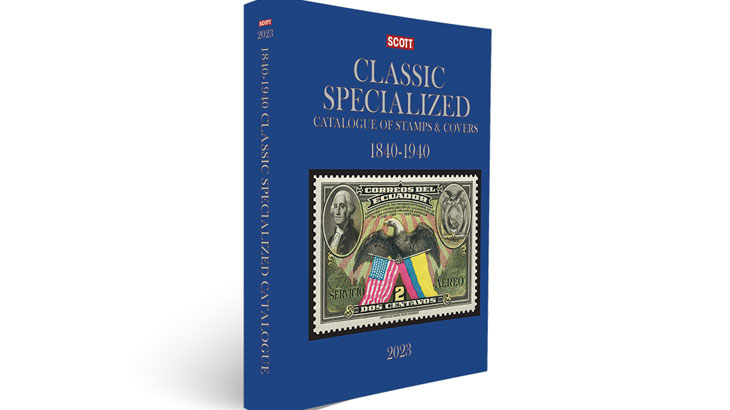 The 2023 Scott Classic Specialized Catalogue of Stamps and Covers 1840-1940 includes many editorial enhancements and value changes.

The 2023 Scott Classic Specialized Catalogue of Stamps and Covers 1840-1940, widely recognized as the best single-volume catalog for classic-era stamps of the world, celebrates its 29th edition this year.

We recognize the tireless efforts of Scott editor-at-large Donna Houseman, who serves as the lead editor of the Scott Classic Specialized catalog. Houseman was assisted by Bill Jones, a former Scott associate editor. Together, they provided numerous updated values and significant editorial enhancements throughout the 2023 Scott Classic Specialized catalog.

What sets the Scott Classic Specialized catalog apart from the six volumes of the Scott Standard Postage Stamp Catalogue are the thousands of never-hinged listings, on-cover listings, varieties, pre-stamp postal markings and forerunner listings, local stamps, and other important features.

The most significant changes in this year’s catalog occurred in India Feudatory States, where we began a thorough review that is likely to span a few catalog seasons. The 2023 catalog includes a reorganization of listings of feudatory states from Alwar through Dungarpur. This review resulted in more than 2,600 value changes and more than 700 number changes and additions.

Also, the Bahawalpur listings in Pakistan were revised with more than 100 value changes and 52 number changes and additions made.

A couple of hundred value changes were made to Canada and the provinces for this year’s catalog. A number of the changes, a mix of increases and decreases, were the result of auction realizations.

Great Britain received a thorough review with almost 1,400 value changes made to major number and to minor and unlettered minor varieties.

British Offices Abroad also received a careful review, and 225 value changes were made alongside a number of new minor letter varieties being added.

Almost 80 value changes were made for Bolivia.

Approximately 200 value changes were made for Jamaica and a little more than 100 for Kenya, Uganda and Tanganyika.

Nauru was reviewed with about 70 value changes made and new minors added to the listings.

Nigeria, Niue and the Pitcairn Islands were looked at, and approximately 40, 170 and 40 value changes were made, respectively.

The stamps of San Marino were looked at, and approximately 250 value changes were made in addition to the new on-cover listings mentioned earlier in this article.

Lastly, a handful of value changes were made for Sarawak, Somaliland Protectorate and Zanzibar. New varieties were also added for Zanzibar.

Mint, never-hinged values were added or updated for a number of countries throughout the catalog.

We encourage you to pay special attention to the Number Additions, Deletions and Changes found in this catalog. We also suggest reading the catalog introduction, which includes an abundance of useful information.

And for those with interest in the Scott Digital Catalogue Subscription, images of stamps not pictured in the print catalog but shown in the digital version were added to a number of countries, with most new images appearing in Austria. Overall, approximately 400 new images were added to the online catalog.

An overview of the 2023 Scott U.S. Specialized catalog