A debt of gratitude to Canadian songwriter Stan Rogers 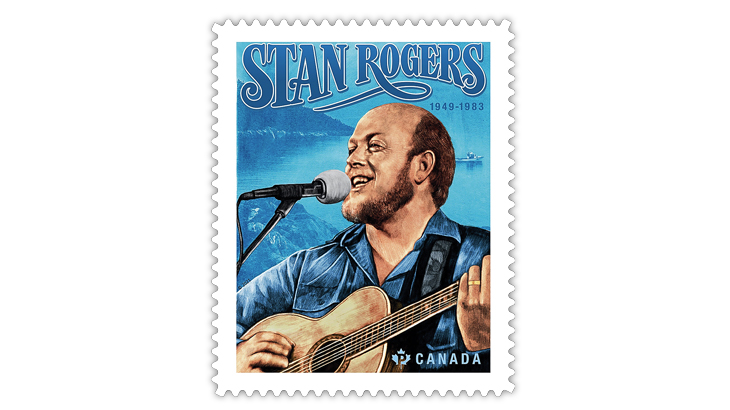 Canada Post remembered singer-songwriter Stan Rogers on this stamp issued July 21. One of his songs, The Mary Ellen Carter, was about the sinking and later raising of a ship of that name

If I may stray into Canadian philately and some personal thoughts, I want to acknowledge a debt of gratitude to singer-songwriter Stan Rogers who was honored on a Canadian stamp issued July 21.

I discovered his music about 30 years ago and have loved it ever since. One song in particular sticks with me. Titled The Mary Ellen Carter, it was written in 1979 and describes the sinking of a ship of that name and its raising by a devoted group of its former crew.

By a confluence of events, namely the recent passing of my wife of nearly 55 years, having Canada issue this stamp reminds me of the ending refrain from this song:

And you, to whom adversity has dealt the final blow

With smiling bastards lying to you everywhere you go,

Turn to, and put out all your strength of arm and heart and brain

Rise again! Rise again — though your heart it be broken

And life about to end.

No matter what you’ve lost; be it a home, a love, a friend.

My wife, the former Nanette Rose Merlino, was a determined person, a giving person, who fought stage IV cancer for five years, even when the short term looked grim. We had some victories, but we knew where it would end — just not when.

As I get used to life without her, I am reminded of a line from another song: Bed of Roses by the Statler Brothers: “Off life’s bramble bush, I picked a rose.”