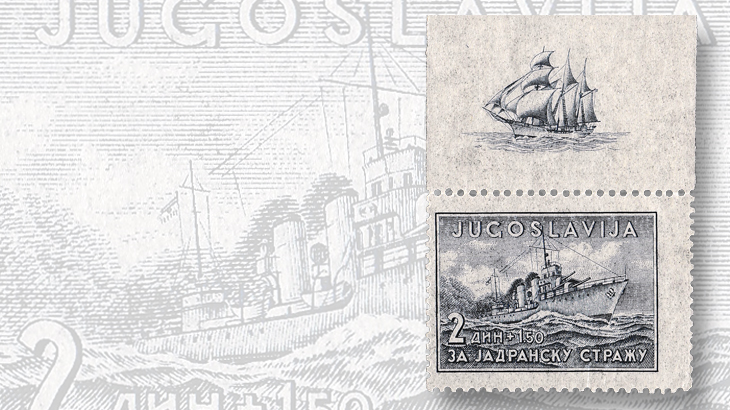 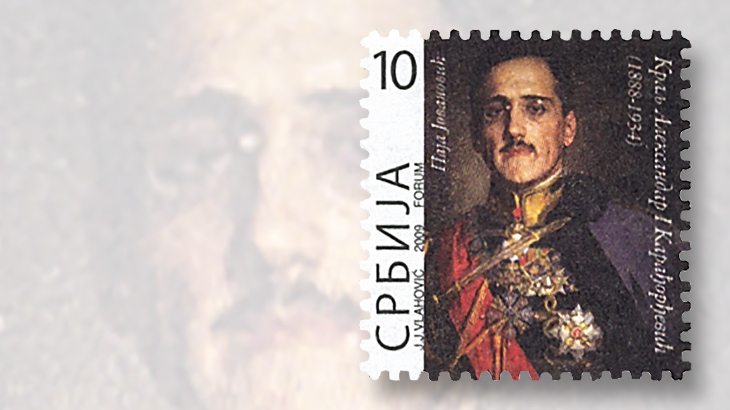 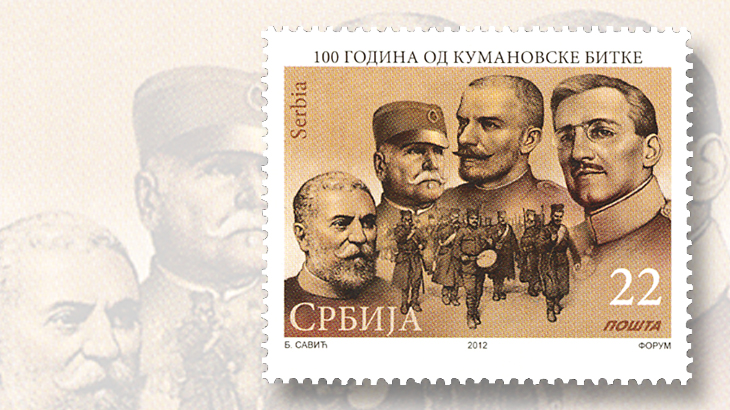 A Serbia 2012 22-dinar Battle of Kumanovo Centenary stamp (Scott 608) Prince Regent Alexander Karageorgevich (later King Alexander I of Yugoslavia) is shown at the right of the design. The stamp commemorates a Serbian victory in the First Balkan War. 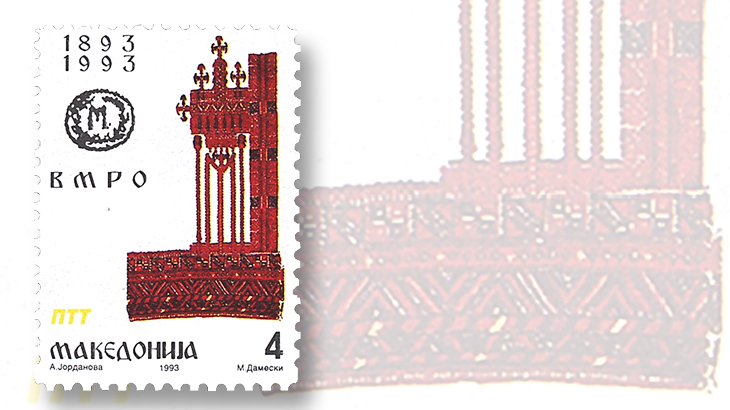 A Macedonia 1993 4d Internal Macedonian Revolutionary Organization stamp (Scott 17) issued for the 100th anniversary of the founding of the IMRO. 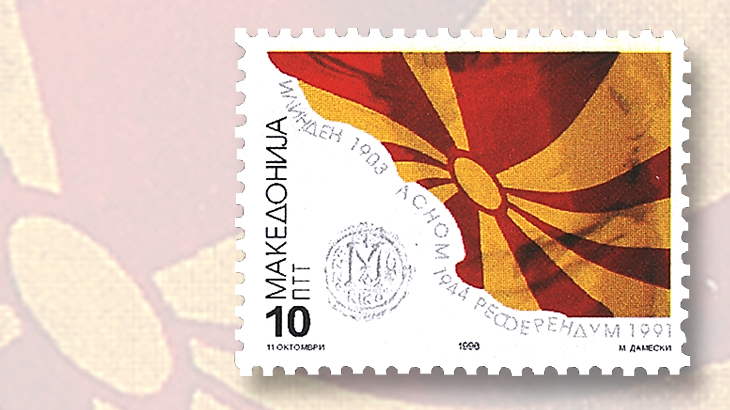 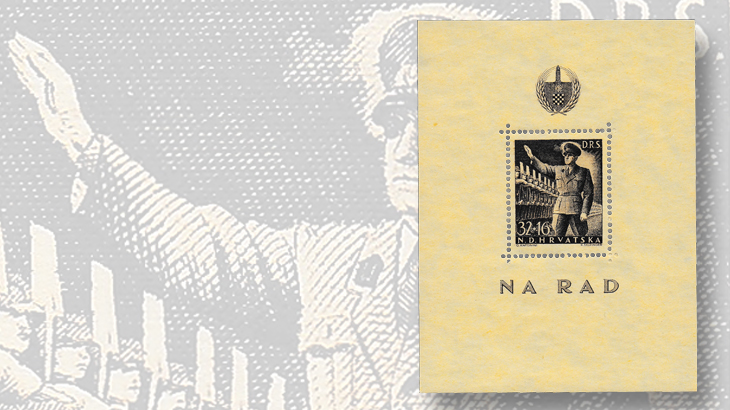 For much of its history, Macedonia has suffered from an identity crisis.

There are between 1.5 million and 2 million people who speak Macedonian as their native tongue. Most of them live in the Balkan Peninsula in a landlocked area wedged between Albania, Kosovo, Serbia, Bulgaria, and Greece.

Slavic-speaking people who would become the Macedonians arrived in this area in the late sixth century. They are Eastern Orthodox Christians. They were part of the Bulgarian Empire, the Byzantine Empire, and the Serbian Empire before being conquered by the Ottoman Turks in the 14th century. The First Balkan War (1912) liberated all of Macedonia from the Ottomans.

The Macedonian language is an Eastern South Slavic language closely related to Bulgarian and Serbo-Croatian. The defeat of the Ottoman Turks in the First Balkan War (1912) left Macedonia divided between Serbia, Bulgaria, and Greece.

The Greeks called them “Slavophone Greeks,” and maintained that they were really Greeks who just happened to speak a Slavic language instead of Greek. The Macedonians themselves were divided on the issue.

Many had little or no sense of a national identity and if asked to identify themselves might reply, “I am a Christian who lives in this place.”

Thinking that Serbia and Greece received too much of Macedonia in the First Balkan War, on June 29, 1913, Bulgaria attacked its former allies, starting the Second Balkan War. The Bulgarian attack was repulsed.

Greece and Serbia then invaded Bulgaria from the south and west. Romania took the opportunity to invade from the north, while the Ottoman Turks invaded from the east. Bulgaria sued for peace and lost land to all four countries.

The Internal Macedonian Revolutionary Organization was founded in 1893 with the general intention of establishing Macedonian autonomy.

Like many other revolutionary groups, it would splinter into several factions and go through a series of name changes. For simplicity’s sake, I will refer to it throughout as the IMRO.

The Supremists were closely allied to the Italian fascist government and the Ustase (the Croatian fascist party).

For the Supremists, the Yugoslav government was the primary enemy. Based in the Petrich District (Bulgarian Macedonia) of Bulgaria, the IMRO was often hand-in-glove with the Bulgarian government, police, and military.

Between 1924 and 1934 (at which time it was suppressed by the Bulgarian government), the IMRO carried out 884 assassinations within Bulgaria.

The victims were opposition politicians and judges, police, and local authorities who refused to cooperate with the IMRO.

From 1919 to 1934, it also murdered at least 706 Yugoslavian officials and citizens. Like later terrorist organizations such as the Palestinian Liberation Organization and the Irish Republican Army, the IMRO turned to organized crime to fund its operations: notably, extortion, kidnapping, and heroin trafficking.

King Alexander I of Yugoslavia

Some have said that King Alexander I of Yugoslavia was the only real Yugoslav who ever lived. Everyone else in the country was either Serbian, Croatian, Slovenian, Bosniak, Macedonian, or Albanian.

He was scrupulously fair and even-handed with all, but in trying to mold the disparate peoples of his kingdom into one nation, he pleased few and angered many. Chief among his enemies were the Ustase and the IMRO.

King Alexander was a staunch Western ally and was committed to the system of collective security promoted by France and Great Britain. In October 1934, he sailed aboard the Royal Yugoslav Navy cruiser Dubrovnik for a state visit to France to strengthen ties between France and the Little Entente (Czechoslovakia, Romania, and Yugoslavia).

Both Italy and Hungary had revanchist designs on Yugoslav territory. Elements within the Italian and Hungarian governments conspired with the Ustase to assassinate Alexander during his state visit to France.

The operation was masterminded by Ustase leader Ante Pavelich, who would later serve as the fascist dictator of Croatia during World War II. Italy supplied passports, funds, equipment, and a base of operations for the plot.

Pavelich asked the IMRO for a hit man and Vlado Cernozemski (birth name Velichko Dimitrov Kerin) was assigned. His nom de guerre was Vlado the Chauffeur.

Vlado the Chauffeur worked for the Supremist arm of the IMRO and self-identified as a Bulgarian. He had twice previously been tried and sentenced to death for assassinations in Bulgaria.

After the first conviction, he was allowed to escape by the police. He received a government pardon after the second conviction. He had carried out many other assassinations without the formality of being arrested and charged.

After he was pardoned, Vlado the Chauffeur relocated to Italy where he trained Ustase assassins and terrorists in a camp run with Italian government connivance.

King Alexander arrived in Marseilles, France, on Oct. 9, 1934. He was met by French foreign minister Louis Barthou. As they rode through the streets of Marseilles thronged with cheering crowds, Vlado the Chauffeur stepped up and fired into the car with a semi-automatic pistol.

A French mounted policeman slashed Vlado the Chauffeur with his sabre, and he was caught and beaten to death by the crowd before the police could get to him.

His three Croatian accomplices were arrested, tried and convicted for accessory to murder.

Italy refused to extradite Pavelich, so he was tried, convicted and sentenced to death in absentia. Diplomatic protests to Italy and Hungary for their involvement in the operation were broadly denied and largely ignored.

King Alexander’s body was returned to Yugoslavia aboard the Dubrovnik. After a state funeral in Belgrade attended by half a million people, King Alexander was interred in the Royal Oplenac Mausoleum in St. George’s Church in Topola, Serbia.

Pavelich served as dictator of the fascist Croatian puppet state during World War II, where he was responsible for carrying out genocide against Jews, Gypsies, Serbs, and Bosniaks.

After the war, he was smuggled out of Croatia to Italy, disguised as a Roman Catholic priest, with the connivance of the Vatican.

In 1948, he secured passage to Argentina. He lived in Argentina and Chile until 1957, when he was allowed to enter Spain. He died peacefully in Madrid in 1959.

Evidently there is no longer any sentiment for union with Bulgaria, but the large Albanian minority (roughly 25 percent of the population) remains restive.