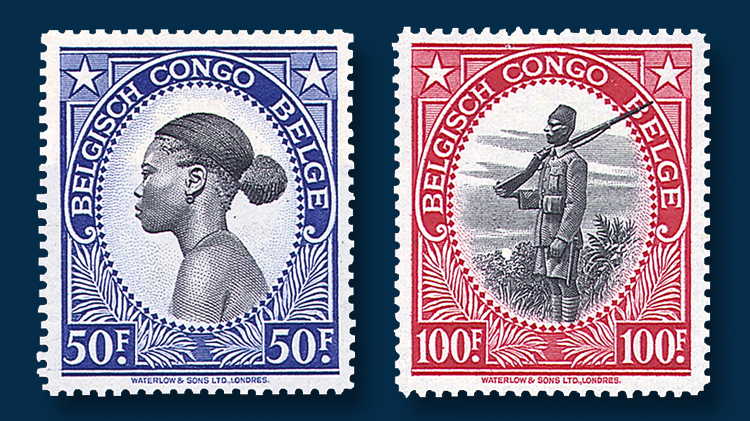 The 1943 Belgian Congo set of two high denomination stamps (Scott 226-227) is in demand by classic stamp collectors and is a good buy in mint never-hinged condition in the $20-to-$25 range.

If prizes were being awarded for the worst example of colonial administration, Belgium might well take home the trophy for its execrable misrule of the Belgian Congo.

The colony began life as the Congo Free State, which was the personal possession of King Leopold II of Belgium. Leopold ran the colony through a camarilla of cronies titled the Association Internationale Africane. The king and his minions mercilessly exploited the people and the resources of the colony. Accurate records do not exist, but deaths directly attributable to the colonial misrule likely ran to six figures.

In 1908, public outcry and international condemnation finally led the Belgian government to take control of the colony, which was renamed the Belgian Congo. After gaining independence in 1960 and several name changes, the country today is known as the Democratic Republic of the Congo.

The Belgians were terrible colonial administrators, but they issued beautiful stamps for the colony. The engraved designs were often bicolors showing exotic landscapes, people, and flora and fauna.

On Jan. 1, 1943, Belgian Congo issued two high-value definitives: a 50-franc Congo Woman stamp and a 100f Askari (native soldier) stamp (Scott 226-227). The 2018 Scott Standard Postage Stamp Catalogue values the set at $27 in mint never-hinged condition. Although it was issued after the arbitrary 1940 cutoff, the set is quite popular with classic stamp collectors and is a good buy in the $20-to-$25 price range. A set in unused hinged condition is a good buy at $12 to $15.