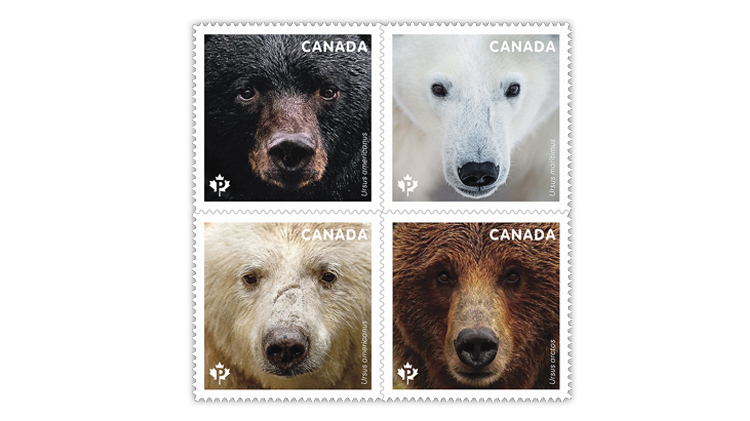 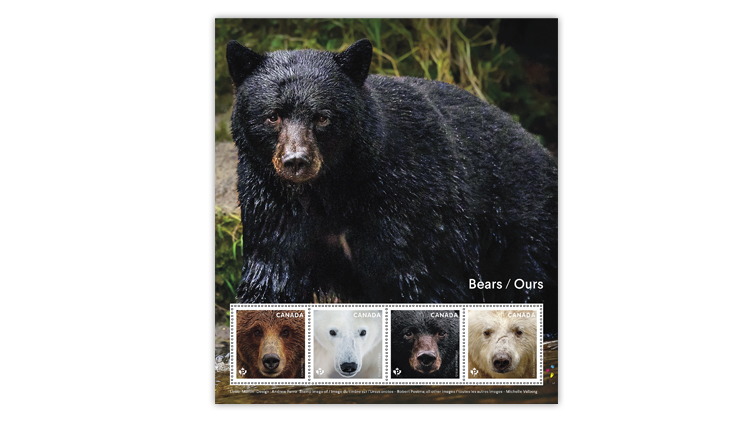 Canada’s Bears issue will also include a pane with the four stamps in a se-tenant strip and a photograph of an American black bear in the selvage.
Previous
Next

The four nondenominated, permanent-rate (currently 90¢) stamps will be issued July 24 in booklets of eight and a pane of four with the designs se-tenant (side-by-side).

Three species of bear are native to Canada. In order of size, they are the polar bear; the grizzly, or North American brown bear; and the black bear.

The stamp set also includes a subspecies of the black bear. Known as Kermode bear, spirit bear and ghost bear, it has white or cream-colored fur.

Perro said of the designs: “People want to connect with wildlife but don’t often see them up close. The subtle differences in the bears’ faces give them personality.”

Canada Post reports that Postma, a wildlife, landscape, and abstract photographer, took the picture of the mother grizzly bear from the safety of his car.

“You need to be open to serendipitous moments,” he said.

Like the other designs in this issue, this stamp includes the country name in the upper right, the “P” in maple leaf emblem for permanent-rate stamps in the lower left and the scientific name of the bear in the lower right.

An estimated 25,000 grizzlies (Ursus arctos) live in the western and northern regions of Canada.

Standing up to 8 feet tall and weighing up to 800 pounds, grizzlies can reach speeds up to 35 mph.

The National Geographic website said: “Grizzly bears are powerful, top-of-the-food-chain predators, yet much of their diet consists of nuts, berries, fruit, leaves, and roots. Bears also eat other animals, from rodents to moose.

“Grizzlies are typically brown, though their fur can appear to be white-tipped, or grizzled, lending them their traditional name.”

Wildlife and adventure photographer Valberg photographed the other three bears shown on the stamps.

The black bear (Ursus americanus) is the most widely distributed bear species in North America, found in every province and territory of Canada except Prince Edward Island, as well as in the United States and Mexico.

Although they vary in size, black bears can be up to 6 feet tall, weighing up to 600 pounds.

These bears are not picky eaters. The website of the Canadian Wildlife Federation described their diet: “Black bears will eat almost anything available. Most of their food is plant material, especially in the late summer and autumn when berries and nuts are available. Insects such as ants rate high, and black bears will overturn logs, old stumps, and stones while hunting for food. Fish, small mammals, and birds are sometimes on the black bear’s menu.”

The black bear subspecies, the Kermode bear, is found in British Columbia and is the official mammal of that province.

“The Spirit Bear (also known as the Kermode Bear, Ursus americanus kermodei) was added to the list of B.C.’s official symbols in April 2006, according to the website of the government of British Columbia. “The greatest concentration of Spirit Bears can be found on the Central Coast and North Coast of B.C. The Spirit Bear is not albino, but rather it is a black bear that has white fur due to a rare genetic trait.”

The name Kermode comes from Frances Kermode, director of the Royal British Columbia Museum in the early 20th century.

The Kermode bear shown on the stamp has a scar on her nose for which the photographer named her Warrior.

Valberg said: “Warrior walks around like she owns the forest. There’s a regal elegance about her stride that’s incredible to watch.”

Unlike other species of bear, the polar bear is a marine mammal, as reflected by its scientific Ursus maritimus.

The website of Polar Bears International explained: “Home for polar bears is on the sea ice, where they hunt seals at open leads. Polar bears are found in five nations across the Arctic: the U.S. (Alaska), Canada, Russia, Greenland, and Norway (Svalbard).”

According to Canada Post, two-thirds of the world’s population of polar bears roam the country’s circumpolar region.

When standing on its hind legs, the male polar bear can be as tall as 10 feet, and it can weigh more than a ton.

Lowe-Martin printed the stamps by four-color lithography in the following quantities: 250,000 booklets of eight (two panes of four se-tenant stamps) and 40,000 panes of four. The stamps are square, measuring 36 millimeters by 36mm, and the pane of four is 160mm by 180mm. A photograph of a black bear is shown in the selvage.

The first-day cancel depicts four paw prints, and the cachet shows a photograph of a polar bear walking on sea ice. Canada Post will service a total of 7,000 FDCs.