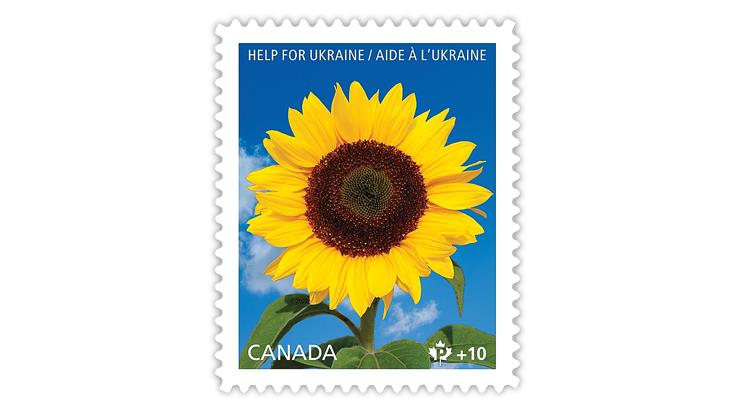 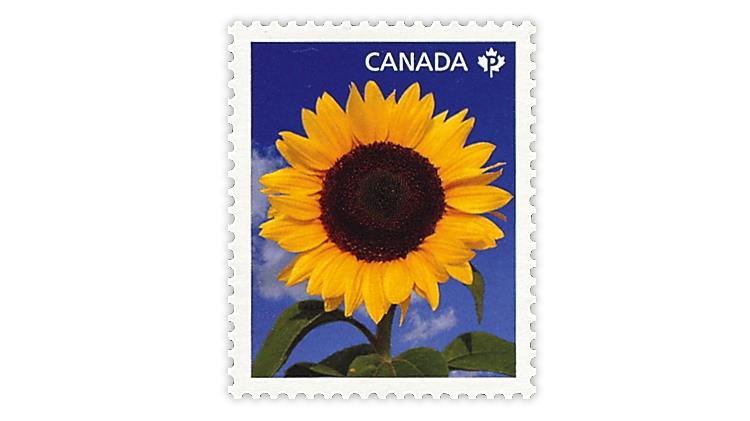 Stamps from a March 3, 2011, Sunflower set of two feature the design to be used on the July 7 semipostal stamp. For the new semipostal, “+10” will be added to the permanent-rate logo at the bottom right of the design to signify the 10¢ surcharge. 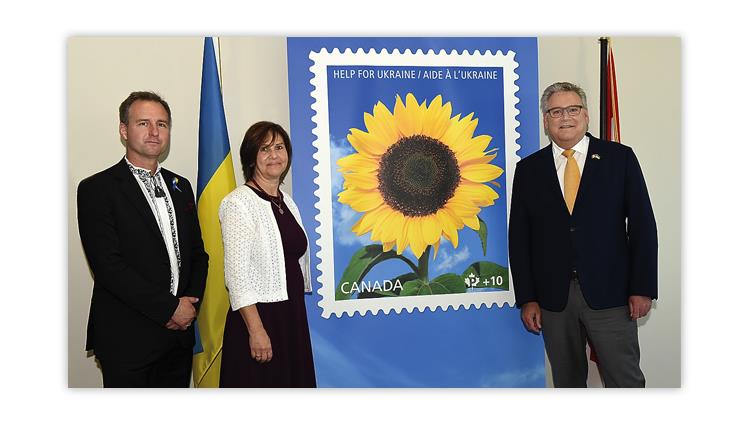 On July 7, Canada Post will issue a semipostal stamp in support of Ukraine during the escalating humanitarian crisis in that country.

Canada Post revealed the design of the semipostal stamp in a surprise announcement on May 19. The stamp is available for preorder.

“It’s with deep concern and compassion that Canadians have watched the devastating events unfolding in Ukraine, which have displaced millions of families,” Canada Post president and CEO Doug Ettinger said. “With this special stamp, Canadians can stand with Ukraine and support the important efforts of the Canada-Ukraine Foundation and their Humanitarian Appeal.”

This is the first time Canada Post has issued a stamp in support of a country in need of humanitarian assistance.

Donations from the sales will go to the Canada-Ukraine Foundation, which has a long history of assisting Ukraine and has been delivering aid wherever needed in the current crisis. According to the United Nations, the Russian invasion of Ukraine has left roughly 16 million Ukrainians in need of humanitarian relief.

The nondenominated, permanent-rate (currently 92¢) semipostal stamp will include a 10¢ surcharge. The stamp will be sold in booklets of 10.

The sunflower is Ukraine’s national flower, and the yellow flower and blue-sky background on the stamp design display the colors of the Ukrainian flag.

According to Canada Post, the sunflower has now become a symbol of peace and unity.

Nearly 4 percent of Canadians can trace their roots to Ukraine, according to Canada Post. Canada was also the first Western country to recognize Ukraine’s independence in 1991.

“The need to support the people of Ukraine has never been greater as the unprovoked and indiscriminate attacks from Russia have led to catastrophic damage to infrastructure, killing of thousands of civilians including children, and millions of people displaced within and outside Ukraine,” Orest Sklierenko, president and CEO of the Canada-Ukraine Foundation said. “The toll has been devastating and we are grateful to Canada Post and to every Canadian who offers support.”

Sklierenko and retired Maj. Oksana Kuzyshyn, chief operating officer of the Canada-Ukraine Foundation, recently met with Ettinger to discuss the initiative of issuing a semipostal stamp for Ukraine.

Isabelle Toussaint Design graphique photographed and designed the original 2011 stamp, and Helene L’Heureux designed the new booklet and first-day cover. Lowe-Martin will print the stamps in quantities of 500,000 booklets of 10 (product no. 414209111).

Canada Post will also offer an official FDC (414209131) designed by L’Heureux and printed in a run of 7,000. The FDC will be canceled in Ottawa. A donation of 10¢ from the purchase of each official FDC will go directly to the Canada-Ukraine Foundation.