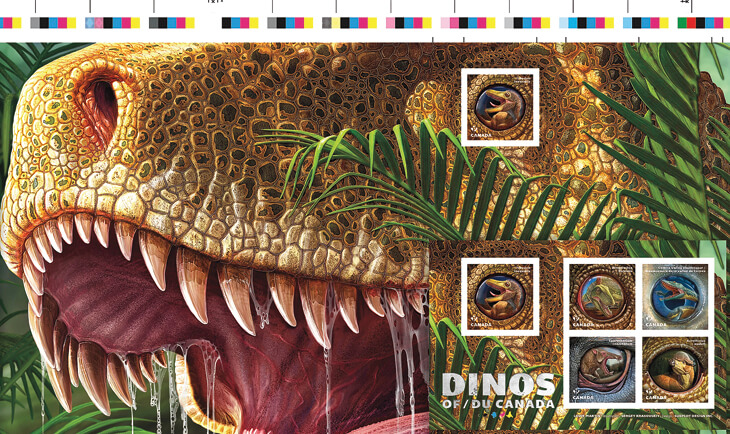 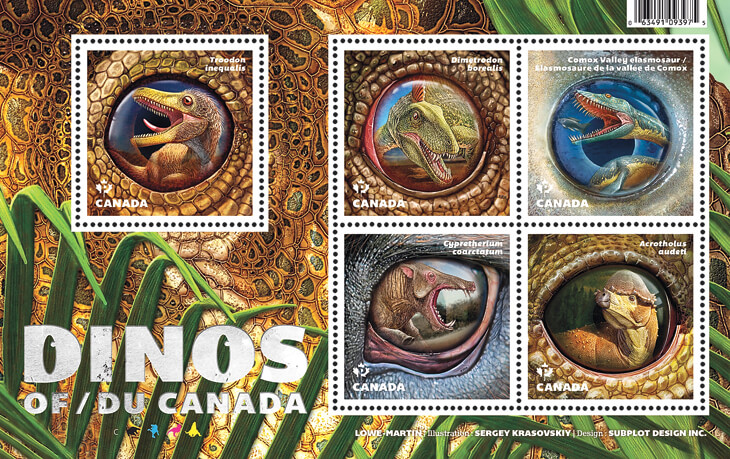 Tiny silhouettes of four of the five prehistoric creatures form the black, cyan, magenta and yellow plate markings at bottom left on this perforated five-stamp souvenir sheet with moisture-activated gum. 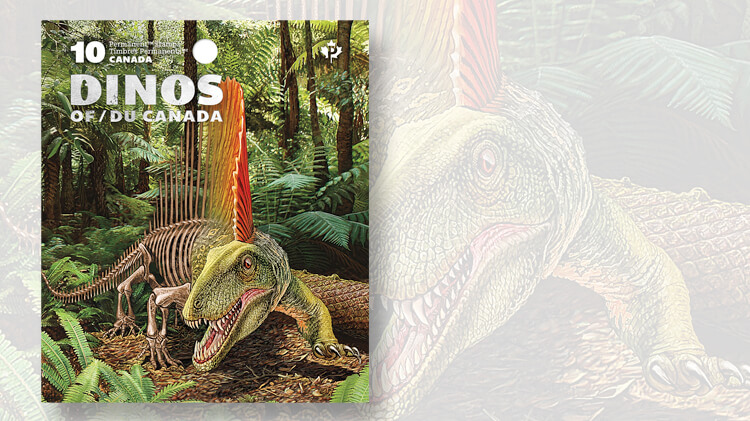 The cover to the 10-stamp 2016 Dinos of Canada booklet offers an unusual view of Dimetrodon borealis: half colorful fright, half ashy fossil. Artists such as Sergey Krasovskiy, who created the illustrations for striking stamps, specialize in bringing exti 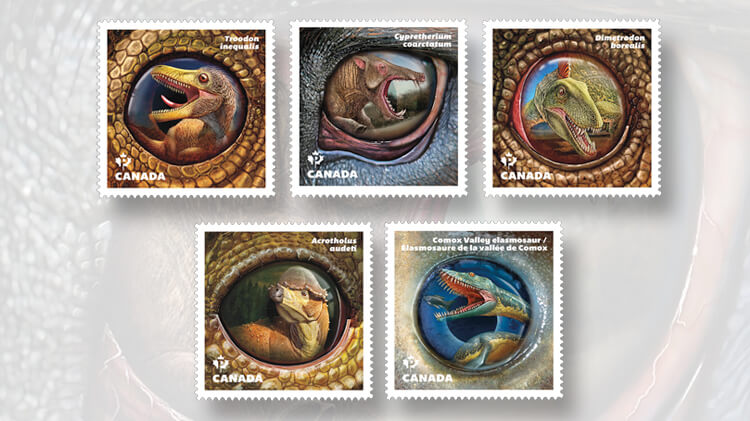 This year, the eyes have it — an unusual point of view for the second installment in the Dinos of Canada series issued May 26.

The series was begun by Canada Post last spring with five booklet stamps and a souvenir sheet issued April 3, 2015.

“Steph came up with the idea of showing the reflection of the creature through the eyes of another. Each eye is a unique frame, so it helps to create an interesting storyline for the stamp. Who’s watching? Predator? Prey? They inspire the imagination without having to depict an entire scene,” said White in an article in Canada Post’s May-July issue of Details.

“Our first challenge,” White also said, “was to find an engaging illustrator — one who was also an expert in the subject.”

That led the design team to Ukrainian Sergey Krasovskiy, who specializes in illustrations depicting dinosaurs and other extinct creatures. His work has been featured in many textbooks and popular magazines, including National Geographic, but these are his first stamps.

Capturing the likeness of one extinct creature in the eye of another posed challenges, but seeing all five of the new Dinos of Canada stamps together makes the unusual technique work.

This is especially true in the uncut press sheet, in which a single stamp appears as a reflection in the eye of a ravenous Tyrannosaurus rex.

“It’s not just an illustration to me,” said Krasovskiy, “I enjoy the process. I hope that it reflects in my work, and that the audience feels that passion.”

Canada is fertile ground for paleontology, with important fossil discoveries from the Atlantic to the Pacific and, this year, from islands off both coasts.

The first of the five se-tenant permanent-rate (currently 85¢) self-adhesive stamps in the booklet of 10 features Troodon inequalis, which means “wounding tooth” in Greek, alluding to deep serrations on its teeth.

Judged likely to have been an omnivore like early primates and modern raccoon, troodon was well-equipped for predation, with long, sickle-like claws on its feet, heavy talons on its upper limbs, and a physique prepared for pursuit.

Its relatively large brain suggests greater mental abilities than most contemporaries 75 million to 77 million years ago.

Though described in Details magazine as a “tiny, birdlike” creature, it was in fact almost 8 feet long and two-thirds the size of a man.

In Canada, its remains have been found in southern and southwestern Alberta’s Dinosaur Park and Horseshoe Canyon formations. The stamp appears to picture an infant or juvenile.

The most recent and mammalian of the creatures on this year’s stamps, the piglike Cypretherium coarctatum and its entelodent relatives were apex predators in North America in the early Miocene era some 23 to 18 million years ago.

Its generic name, which translates as “Cypress beast,” is based on the Cypress Hills Formation in southwestern Saskatchewan and southeastern Alberta, where its remains have been found.

With a head similar to that of a wart hog and a bisonlike body, it could and did eat everything it encountered, but appeared to prefer meat. Its nickname is “hell pig.”

Dimetrodon borealis lived in the early Permian period about 270 million years ago. Though often described as “mammal-like” on the basis of key anatomical traits, the layman might be unlikely to recognize a heavy-set, toothy, thick-jawed, sail-backed dinosaur as such.

Based on a jaw found around 1845 when a well was dug in Spring Brook, Prince Edward Island, this was the first dinosaur to have been found in Canada.

Acrotholus audeti, the most recently identified of the creatures in this Dinos of Canada set, might be the oldest of its type of thick-headed herbivores.

Its generic name means “high dome,” alluding to a crowned skull almost 4 inches thick, while its species name salutes Alberta rancher Roy Audet, from whose property in 2008 the best example is said to have been recovered. Six feet long and weighing almost 90 pounds, it looks more likely to have been a good neighbor than this year’s other extinct animals.

Comox Valley elasmosaur refers to the remains of an 80-million-year-old, 4,400-pound plesiosaur, an unusually long-necked, paddle-limbed ocean-dweller and a very capable carnivore.

In Vancouver Island’s Comox Valley in November 1988, fossil hunter Mike Trask, ably assisted by Heather, his 12-year-old daughter, came across the remains of this voracious 46-foot-long aquatic reptile, the first found west of the Canadian Rockies.

The square 40-millimeter by 40mm stamps were printed in four-color offset lithography with varnish by Lowe-Martin.

The uncut press sheet features an enlargement of a slavering Tyrannosaurus rex with a reflection in its eye of the young troodon from the stamp.

Some 10,000 official FDCs of the souvenir sheet bear horizontally se-tenant strips of the five stamps on an envelope with an overall image of a fern-edged forest. Priced at $5.25, these are Canada Post item 404018144.

Not specifically promoted as a collectible, but a colorful must-have for Dinos of Canada completists is a “Stuck on Stamps! 2016” kit for the issue, with the stamps, “StampFacts cards” showing the set with information and a guide to pronunciation, the designs, and information about dinosaurs.

The cover of this kit “For Kids” urges recipients to “collect these genuine Canadian stamps and trade them with your friends,” and notes that as a “Bonus!” there are “Five matching temporary tattoos inside!” Priced at $5.95, “Stuck on Stamps! 2016 No. 2” is Canada Post item 402056102.

Check out photos from Canada Post's Dinos of Canada unveiling