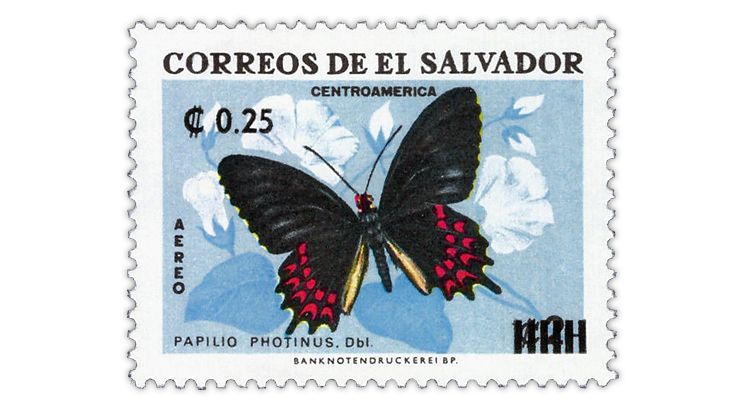 The El Salvador 1975 25-centavo-on-2-colon Papilio Photinus airmail stamp is in demand by butterfly topical collectors and is a good buy at up to full Scott catalog value.

Latin America is a cultural region in the Western Hemisphere where Romance languages (Spanish, Portuguese and French) are predominantly spoken. The market for stamps of most Latin American countries is strong and active.

El Salvador is a Spanish-speaking country on the Pacific coast of Central America between Honduras to the northeast and Guatemala to the northwest.

These airmail provisionals are common and inexpensive in mint, never-hinged condition with the exception of the 25-centavo-on-2-colon Papilio Photinus stamp (Scott C353). The basic stamp (C254) was from a set of four Butterfly airmails issued in 1969.

This provisional stamp was produced to meet a postal need, and most of the stamps were used for postage. It was not widely marketed to stamp dealers or collectors.

This is a stamp that many butterfly topical collectors still need. It is a good buy at up to full Scott catalog value.