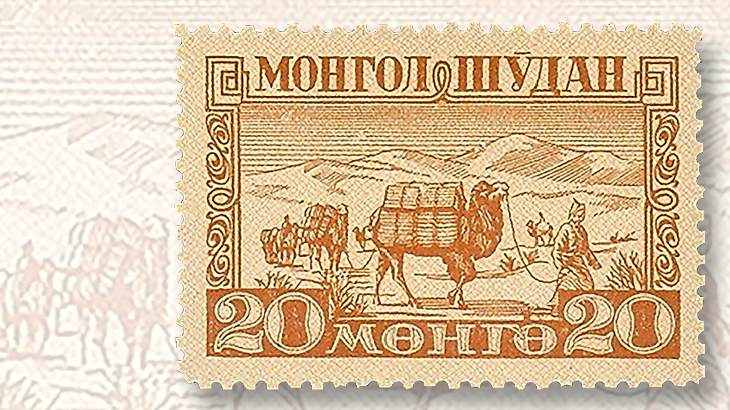 Mongolia’s 1943 People and Scenes set of eight (Scott 75-82) is in demand and is a good buy in unused hinged condition at the 2017 Scott Standard Postage Stamp Catalogue value of $297.

Mongolia lies in Central Asia between China and Russia. There is little arable land. The landlocked country is extremely arid, hot in the summer and very cold in the winter, with the result that most of its area is either desert, mountain or steppe.

The 18th largest country by land area, with a population of just 3 million, it is the most sparsely populated independent country in the world. About 30 percent of the population is nomadic with another 45 percent living in the capital city, Ulan Bator.

Mongolia was dominated sporadically by China until the Russian Bolsheviks established it as a buffer state against China in the 1920s. Communist domination ended in 1990 when the Soviet Union collapsed.

Mongolia issued its first stamps in 1924. With virtually no immigration from Mongolia to the United States and little cross-cultural contact between the two nations, there are not many American collectors who specialize in Mongolia. Most interest in Mongolian stamps has been from topical collectors because the country has been a prolific issuer of topical stamps both during and after the Communist period.

However, there is growing interest in stamps issued from 1924 up through the late 1950s, especially among collectors of Russia and China. A good set to look for is the set of eight issued in 1943 (Scott 75-82). The stamps feature Mongolian people and scenes.

The 2017 Scott Standard Postage Stamp Catalogue values the set in unused hinged condition at $297. This is not an easy set to find, and you might have to buy the stamps one at a time. All are worth full Scott catalog value and perhaps a bit more for those in a strict grade of very fine.