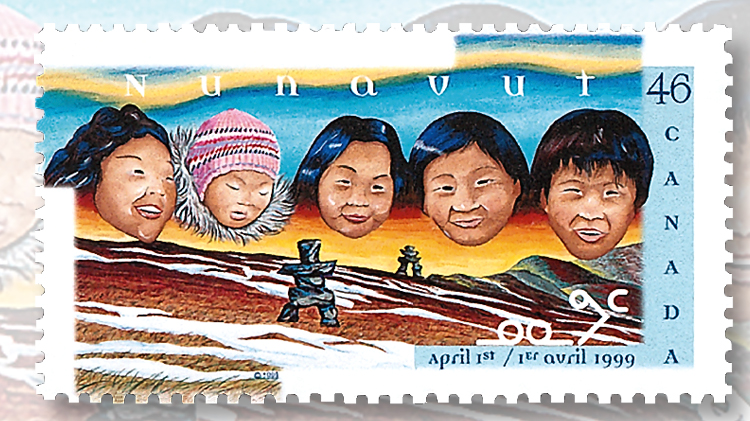 Issued April 1, 1999, the day the territory of Nunavut came into existence, this 46¢ Canadian stamp (Scott 1784) celebrated its creation. The stamp pictures Inuktitut, the indigenous people of Nunavut, of all ages, as well as humanlike stone figures called inukshuk. 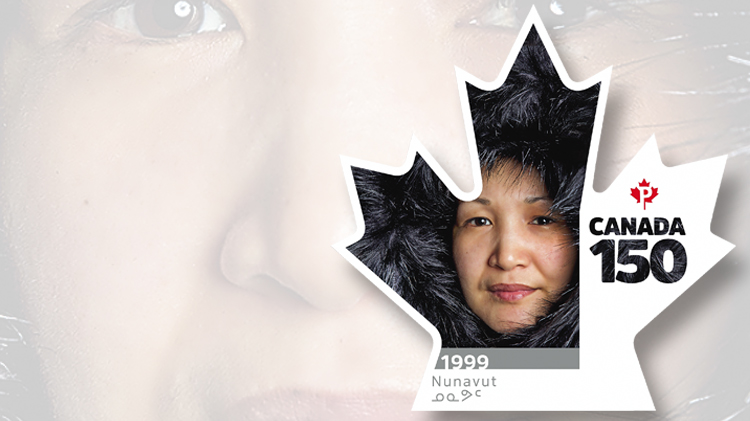 The Canada 150 Nunavut stamp was unveiled March 30, the seventh of 10 stamps in the Canada 150 series. The design of this stamps includes the rendering of the territorial name in the Inuit language of Inuktitut, in which Nunavut means “our land.” 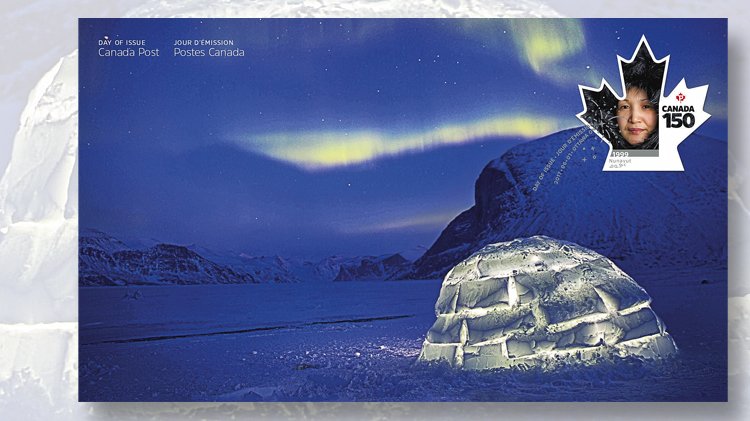 Canada Post’s official first-day cover for the Canada 150 Nunavut stamp shows a well-lit igloo against a snowy mountain background while the northern lights fill the Arctic sky.
Previous
Next

On May 30, Premier Peter Taptuna, Commissioner Nellie Kusugak and Speaker of the Legislative Assembly George Qulaut unveiled the Canada 150 Nunavut stamp at the legislature in Iqaluit, the capital of Canada’s newest, largest territory.

This newly unveiled commemorative is the seventh of 10 maple-leaf-shaped stamps that will be issued June 1 to celebrate Canada 150, honoring important persons, places, and events since Canada’s centennial year of 1967.

The stamp shows a fur-trimmed portrait of Leah Ejangiaq Kines, photographed by her spouse Clare Kines. The Kines and their two children are residents of Arctic Bay, an Inuit hamlet on the Borden Peninsula of northern Baffin Island in the Qikiqtaaluk region of Nunavut, about 500 miles north of the Arctic Circle.

Nunavut (NEW-nah-voot) means “our land” in the Inuit language of Inuktitut, and is inscribed in that language below “Nunavut” in the stamp design.

The text on the back of Canada Post’s official first-day cover for the stamp also appears in Inuktitut, as well as Canada’s official languages of English and French, and tells the story behind the stamp:

“NUNAVUT One of 10 stamps in a special Canada 150 issue showcasing significant events since Canada’s centennial, this stamp celebrates the first major change to the political map since Newfoundland and Labrador joined Confederation in 1949.

“The result of the largest Aboriginal lands claim agreement in Canadian history, Nunavut was created on April 1, 1999, by dividing the Northwest Territories in two. Canada’s newest, largest, most northerly and least populated territory covers an area the size of Mexico, yet is home to only about 32,000 people — most of them Inuit, who have occupied the vast Arctic Archipelago part of the region for some 4,000 years.”

A quarter century of negotiations by various Inuit groups preceded the 1993 Nunavut Land Claims Agreement with Canada’s federal government and that of the Northwest Territories, which laid the foundation for the creation of the territory of Nunavut April 1, 1999.

Carved out of the central and eastern regions of the Northwest Territories, Nunavut is now the largest province or territory in Canada, at 787,155 square miles.

When it and the other nine Canada 150 stamps are issued June 1, this new Nunavut stamp will be the fourth Canada Post has released hailing the new territory.

On April 1, 1999, the day Nunavut came into being, a 46¢ stamp (Scott 1784) was the first to display the name of the new territory in both the Latin alphabet and in Inuktitut. It also was the first to picture inukshuk, man-made stone cairns in the form of stylized human figures.

The inukshuk have become symbols of the region, featured at the center of the Nunavut territorial flag and in its coat of arms, and on several stamps.

Tourist Attractions stamps featured Nunavut twice, in 2001 on a $1.05 stamp picturing Auyuittuq National Park in southeastern Baffin Island (Scott 1904d), and in 2003 on a 65¢ stamp showing Wilberforce Falls on the Hood River in the Kitikmeot Region (Scott 1989a).