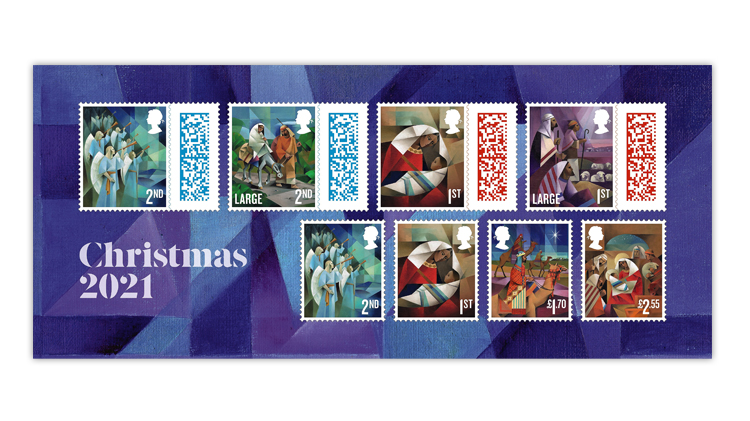 This year’s Great Britain Christmas stamps issued on Nov. 2 show various scenes from the traditional Christmas story with illustrations by artist Jorge Cocco. Included in the set are stamps both with and without barcodes.

Royal Mail said that the designs “are reflective of Cocco’s modern style of painting, illustrating sacred events through post-cubist art.” Cocco refers to this style of art as sacrocubism and also calls it “art for the spiritual intellect.”

The second-class standard stamps feature a group of angels with trumpets. Aside from the trumpets and the sashes on the angels’ gowns, the colors are predominately shades of blue. The post-cubist style resounds through the lines of the angels’ wings and through the lines coming from the top of the image, which could be seen as a light shining from above.

The second-class stamp for large mail shows Mary and Joseph en route to Bethlehem. Mary, shrouded in white, rides a donkey while a gold-clad Joseph leads. Similar to the lines in the previous stamp, straight lines from above encase Mary in a triangle of lighter blue. Subtle gradients of yellow mingle with the blue, making the idea of light even more present.

Two other stamps in this series also illustrate travel scenes. The first-class stamp for large mail depicts shepherds looking off into the distance while sheep rest in the background. Here the lines from above clearly appear lighter than the rest of the purple background, again encasing the human figures.

The £1.70 denominated stamp portrays the Magi (also known as the three kings or the three wise men), sitting atop camels, with a clearly visible star in the sky. In this image, the triangle of light from above shines on their destination in the distance.

The first-class standard stamps show the destination of the shepherds and Magi. In these stamps, Mary holds her newborn baby. The curves of Mary’s white veil lead the eye to the curves outlining the form of Jesus. Lines from Mary’s clothing continue onto the design in the cloth covering Jesus. Here the curves and lines provide a sense of continuation and connection.

Finally all of the characters come together in the £2.55 stamp. Here Mary holds Jesus in a similar method as shown in the first-class standard stamp, but the two now have an audience. The Magi survey the scene from behind and to the side of the mother and child. Joseph, or possibly a shepherd, stands next to Mary while holding a lamb. An ox also looks on, while a semicircle in the background gives a window to the dark desert outside of the manger.

International Security Printers printed these self-adhesive stamps by gravure in sheets of 50 (sold in panes of 25 at most postal outlets). The first-class and second-class stamps for standard-size mail also were issued in booklets of 12. Supple Studio designed the stamps, using Cocco’s illustrations.

The four stamps with barcodes measure 39 millimeters by 30mm each. The other stamps are each 24mm by 28mm. The barcoded stamps have perforations that gauge 15 by 14.5, and the perforations of the stamps without barcodes gauge 14.5 by 15.

The souvenir sheet was printed by lithography by International Security Printers.

A presentation pack includes the eight stamps along with a reflection by Andrew Davison, Starbridge senior lecturer in theology and natural sciences at the University of Cambridge.

“The Nativity features plenty of extraordinary moments,” he wrote, “but its underlying message suggests that such elements — including the star, the angels and those wise men — are actually secondary. Christmas decorations and Christmas carols would be less interesting without them, but when compared to the main point, they are really just that: decorations. At the heart of the story is a baby in his mother’s arms. Without that, there is no message of ‘God with us’, so significant to those who celebrate Christmas with religious devotion; with that in place, we can enjoy the other aspects of the narrative as a joyful addition or decoration. There are angels in Jorge Cocco’s images, with the star and the wise men, but the central image shows us something as universal as humanity itself (and, at the same time, a defining image for Christianity in particular): a mother and her child.”

Other products offered with this Christmas set include first-day covers; a set of nine postcards reproducing the designs of the stamps and the souvenir sheet, and a pane of 20 stamps that Royal Mail calls a collectors sheet.

The collectors sheet includes eight each of the second-class and first-class stamps and two each of the denominated stamps. Shown in the selvage are four angels, also painted by Cocco.

The stamps and related products are available online from Royal Mail.

Christmas stamps emphasize connection and safety during the pandemic