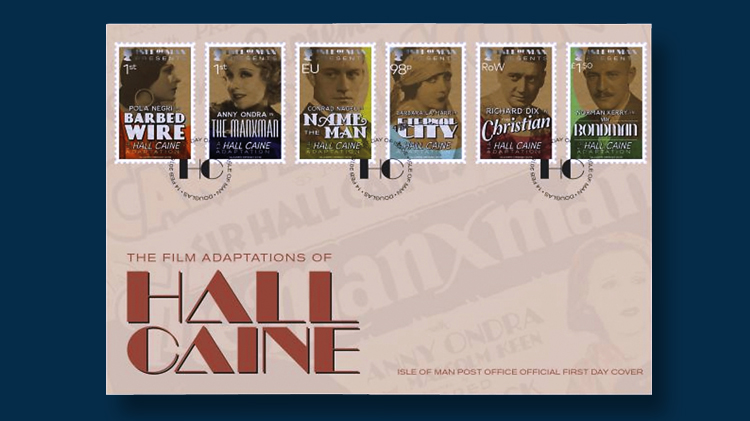 The first-day cover for the Isle of Man’s stamps featuring silent films based on novels by Hall Caine, a Manx author who lived from 1853-1931.

For example, six stamps from the Isle of Man show actors and actresses who starred in silent films based on the novels of Manx author Hall Caine (1853-1931). The stamps were issued Feb. 14.

Maxine Cannon, the general manager of stamps and coins for the Isle of Man Post Office, said, “Over the years the Island has been proud to be called home to many incredible talents in the creative industries, and Hall Caine is one of the most prominent. We are very pleased to issue these stamps to recognise his work and the impact he has made in the literary and film world locally, as well as globally.”

She also mentioned that the stamp issue coincides with the 90th anniversary of talking pictures and the Academy Awards.

One of the two nondenominated first-class stamps depicts Polish actress Pola Negri (1897-1987), who starred in Barbed Wire in 1927. The film is based on Caine’s 1923 novel originally titled The Woman of Knockaloe.

The other first-class stamp honors The Manxman directed in 1929 by Alfred Hitchcock, the last of his silent films. The stamp depicts Czech actress Anny Ondra (1903-1987), who starred as Kate Cregeen in the film.

The first-class domestic rate for letters sent within the Isle of Man and to Great Britain is 52 pence as of April 3. It was 47p when the stamps were issued.

Another nondenominated stamp in the set is inscribed “EU,” for the rate to European countries (currently 83p).

According to the Isle of Man Post Office, Kerry’s Bondman role was Caine’s favorite film performance.

Lowe-Martin printed the stamps in sheets of 20, and the designs were by Glazier Design.