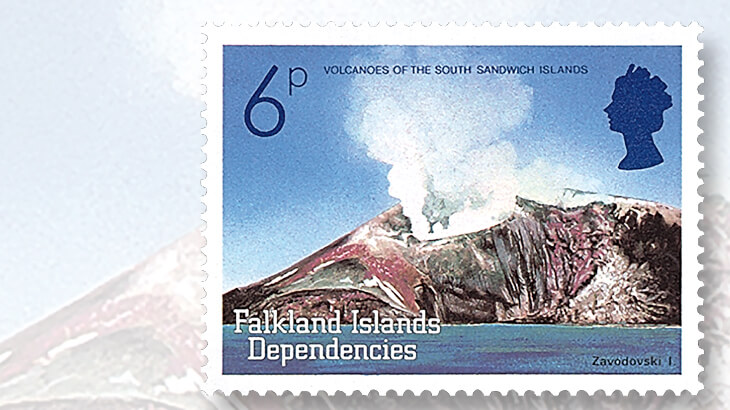 In more modern times, the South Sandwich Islands volcanoes are depicted on a 1984 stamp of the Falkland Islands Dependencies. 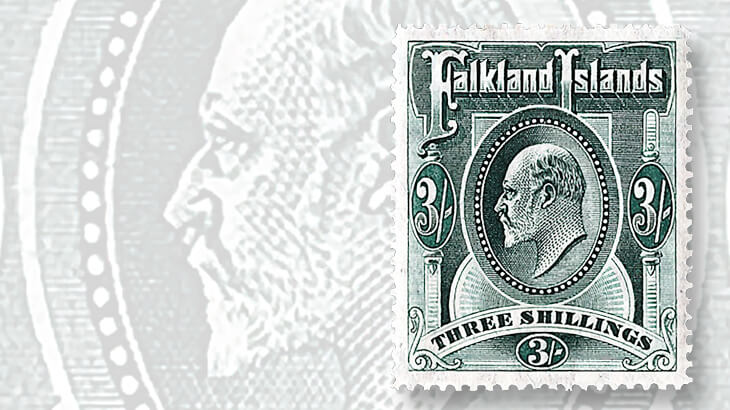 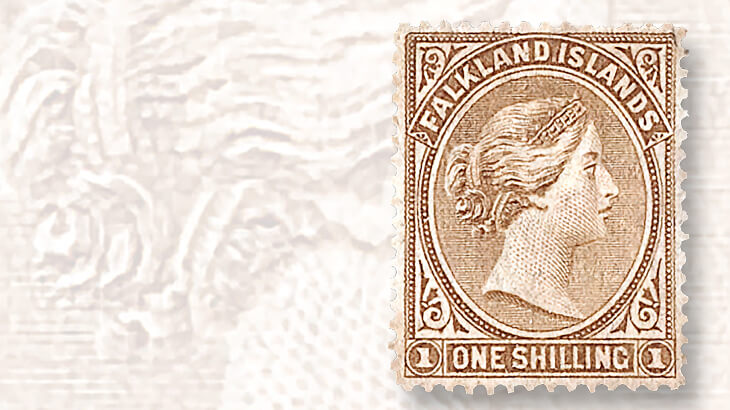 As a British colony, Falkland Islands portrayed Queen Victoria on its first stamps in 1878. 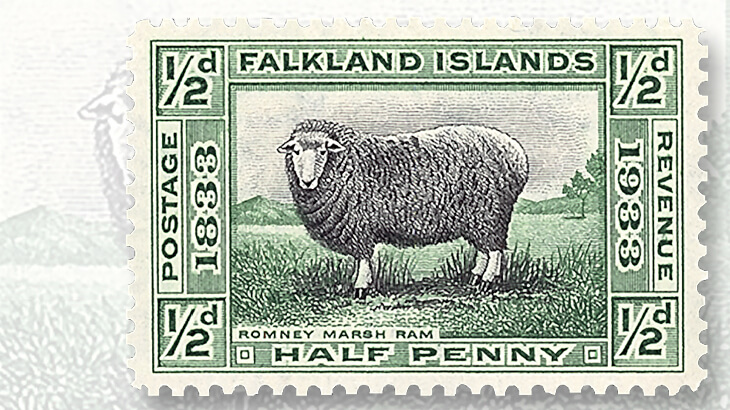 A stamp from the 1933 set noted the Falkland Islands’ sheep-herding occupation by picturing a Romney Marsh ram. 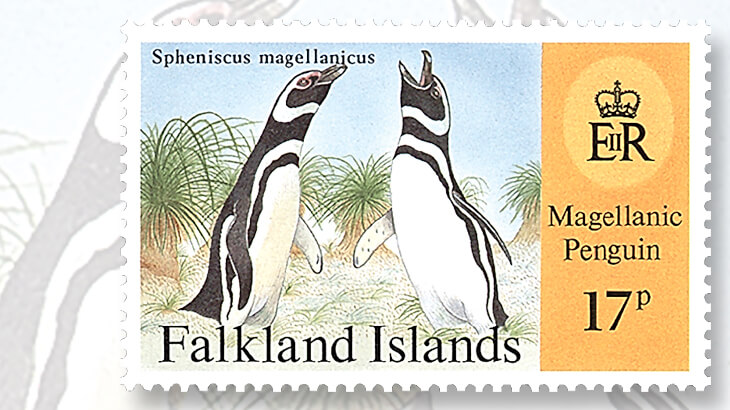 Local penguins have continued to appear over the years on Falkland Islands issues, including two adult Magellanic penguins in 1997. 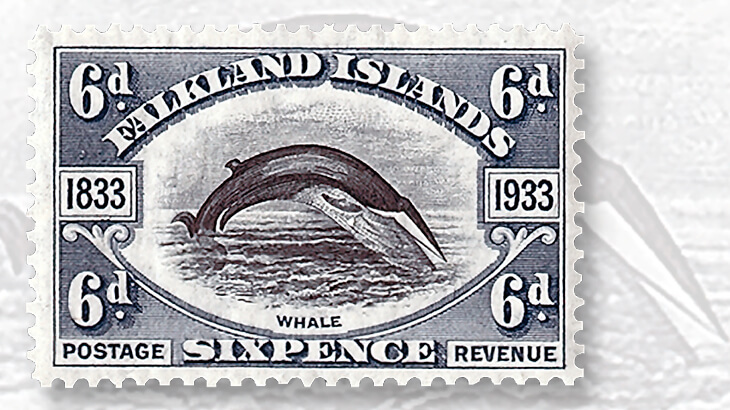 The Falkland Islands whaling industry is featured in the 1933 Colonial Centenary set with an image of a breaching blue whale. 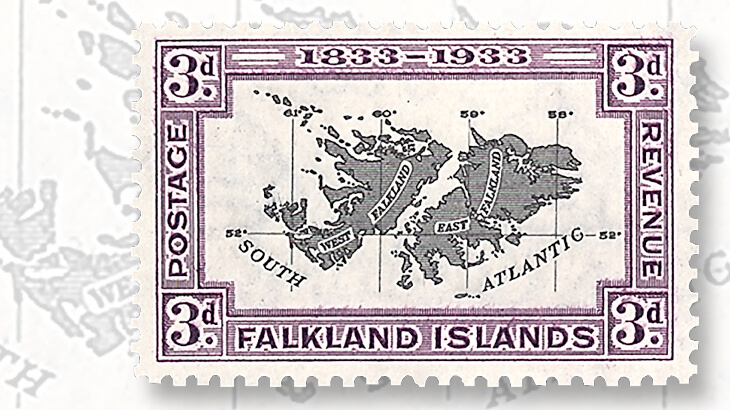 A map of the region formed the design for one stamp in the 1933 bicolor set celebrating the Falkland Islands centenary as a British colony. 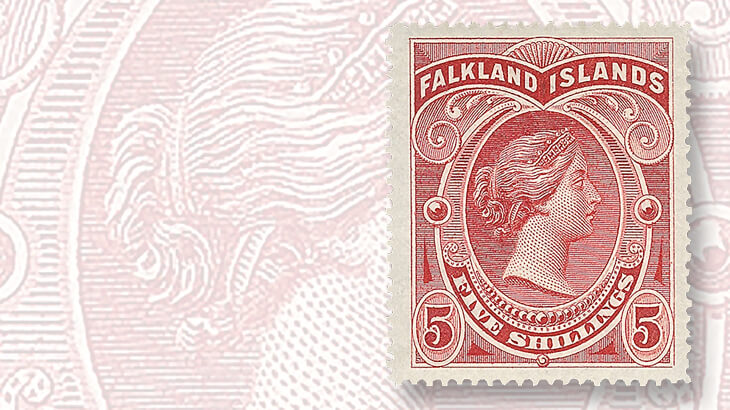 A more elaborate image of Queen Victoria appeared on Falkland Islands issues of 1898. 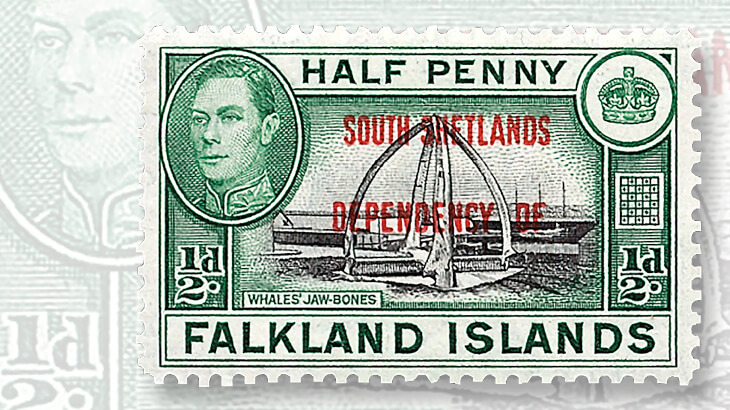 Individual islands of the Falkland Island Dependencies, including some that later became part of the British Antarctic Territory, used overprinted Falklands regular issues in 1944. 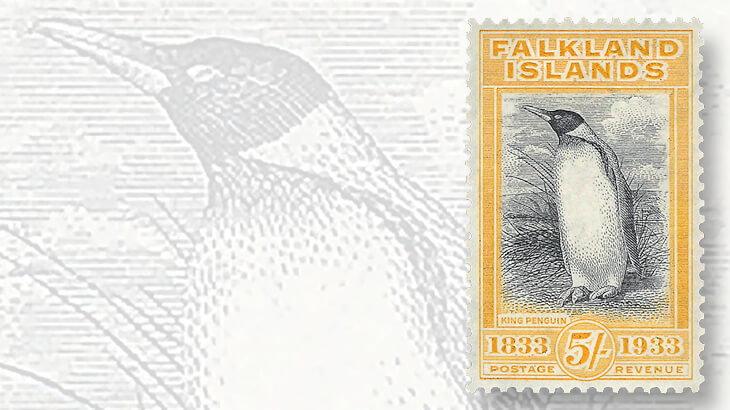 A regal king penguin poses on another of the dozen stamps in the 1933 Falkland Islands set.
Previous
Next

Over time, the Falkland Islands, an archipelago of some 778 islands in the South Atlantic, have been claimed by many nations, beginning with France in 1764, followed soon after by the United Kingdom and Spain. Argentina and Chile also made efforts to claim the Falklands as their own.

Whaling was the initial attraction for nations and settlers, with cattle and sheep farms established later. A British naval force arrived in 1833 to formally assert the islands’ status as a British colony.

The Falklands, including South Georgia and South Sandwich Islands, presently have the status of a self-governing British Overseas Territory. Other former Falkland Islands — South Shetland Islands, South Orkney Islands and Graham Land — became part of the British Antarctic Territory in 1962.

With settlers came a need for mail service, post offices, and postage stamps. The first Falkland Islands stamps were issued in 1878-79, bearing an image of Queen Victoria.

Generally speaking, higher denomination stamps are more likely to be of greater value than those of lower denominations, but this is not the case with the early Falklands issues.

Over the next years, new Falklands stamps became more artistic. For example, Queen Victoria’s profile received a beautiful frame in 1898 (Scott 20-21). Victoria died in 1901, and her eldest son, Edward Albert, became King Edward VII. He, too, is portrayed on elegantly designed stamps with his profile beautifully framed (Scott 22-29, issued 1904-07).

Many of these early Falklands stamps have varieties that are worth investigating. The 3sh King Edward VII stamp can be found with an inverted watermark or a reversed watermark, as well as in a deep green color (Scott 28a) instead of its usual gray green.

In general, the early Falklands stamps are pricey and can be hard to find.

In 1933, to celebrate the centenary of the permanent occupation of the islands as a British colony, the Falkland Islands issued a stunning set of 12 bicolor pictorial stamps with engraved designs (Scott 65-76), which convey a good idea of the diversity of the islands.

The 3d stamp illustrates a map of the region (Scott 69), and the sheep and whaling industries are represented by a fine image of a Romney marsh ram on the ½d stamp (65), a whaling ship on the 1½d (67), and a breaching blue whale on the 6d (71).

A collector favorite among the stamps of the 1933 set, the 5sh stamp depicting a handsome king penguin (Scott 74), is illustrated nearby.

Following the Scott Standard catalog listings of Falkland Islands issues is a section for the stamps issued between 1946-85 with the inscription “Falkland Islands Dependencies.” The dependencies were Graham Land, South Georgia, South Orkneys, and South Shetlands.

These dependencies initially (in 1944) used regular Falklands stamps overprinted with the individual island name followed by the words “Dependency of.” The example pictured is a ½d stamp from South Shetlands, which today is part of the British Antarctic Territory (Falkland Islands Scott 4L1).

If you are intrigued by these far-flung islands, you might enjoy seeing what new stamps are being issued for the Falklands. Since August 2014, Falklands Post Service Ltd. has been the company in charge of postal affairs for the islands, including a philatelic bureau that handles sales to collectors.