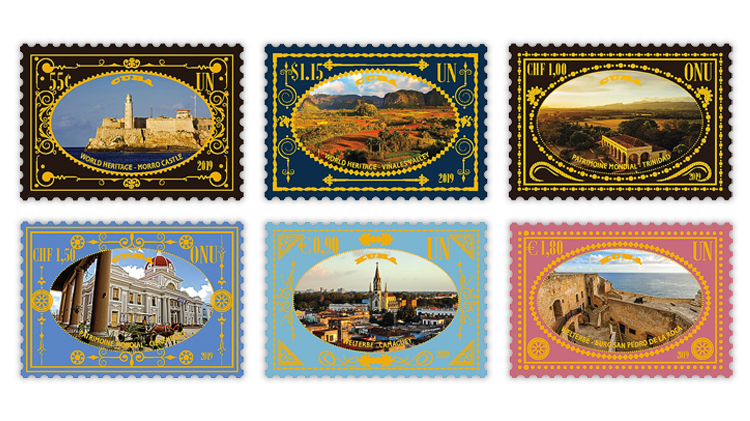 This stamp series features sites that have been inscribed on UNESCO’s World Heritage list. Through this list, UNESCO “seeks to encourage the identification, protection and preservation of cultural and natural heritage around the world considered to be of outstanding value to humanity.”

UNPA’s Cuba World Heritage set includes two stamps and one booklet for each UNPA post office located at U.N. headquarters in New York City (50¢, $1.15); the Palais des Nations in Geneva, Switzerland (1 franc, 1.50fr); and the Vienna International Center in Vienna, Austria (€0.90, €1.80). The booklets are prestige booklets that include text and illustrations in addition to stamps.

Construction of this fortress at the entrance to the Bay of Havana began in 1589. The website Culture Trip summarized the early history: “The Havana fortress was built by Italian engineer Juan Bautista Antonelli to repel raiders from the Cuban capital. Slave laborers were used to dig rocks from the moat and build the thick castle walls, although it took 30 years to complete construction due to economic problems and political wrangling.”

The lighthouse, which is included in the photograph shown on the stamp, was built in 1844.

Today Morro Castle is a popular tourist site and houses the Maritime Museum.

The $1.15 stamp features Vinales Valley, which was inscribed on the World Heritage list in 1999.

Located on the western end of the island of Cuba, this valley in the Sierra de los Organos is known for its beauty and for its fertile soil, well-suited for growing tobacco.

The Why Not Cuba travel advice site describes the landscape: “Also known as the ‘garden of Cuba,’ it has a mind-blowing contrast of the red ground with the green crops. The symbols of the valley are the mogotes, extraordinary round-shaped hills, covering all over the valley’s surface. … Under many of these mountains you can find big caves: some of them are the largest in the whole country.”

The design of the 1fr stamp represents Trinidad and the Valley de los Ingenios, added to the World Heritage list in 1988. This site in central Cuba includes the colonial town of Trinidad, founded in the early 16th century, and three surrounding valleys where sugar was produced in the 18th and 19th centuries.

The UNESCO website said, “More than fifty sugar mills were in operation here at the industry’s peak in the 19th century, and in 1827 more than 11,000 slaves were working in the mills.”

The photograph on the stamp shows the house of the Manaca Iznaga plantation.

The UNESCO website also described Trinidad as “a bridgehead for the conquest of the American continent. Its 18th- and 19th-century buildings, such as the Palacio Brunet and the Palacio Cantero, were built in its days of prosperity from the sugar trade.”

The 1.50fr stamp honors another colonial town, Cienfuegos. Located on the southern coast of Cuba, Cienfuegos was settled by people of French origin, including some from Louisiana, and became a trading center for sugar cane, tobacco and coffee, according to UNESCO.

The photo shows a horse-drawn carriage in front of the Palacio de Valle, a villa built in the early 20th century by Italian architect Alfredo Colli.

The urban historic center of Cienfuegos was placed on the World Heritage list in 2005.

The historic center of Camaguey, which was inscribed on the list in 2008, is highlighted on the €0.90 stamp.

Now Cuba’s third largest city and the capital of the province of the same name, Camaguey was one of the seven first villages founded by the Spanish in Cuba. Originally named Villa de Santa Maria del Puerto del Príncipe, it was established in 1514 on the Bay of Nuevitas and moved inland to its current location 14 years later.

As the town was rebuilt, it “developed on the basis of an irregular urban pattern that contains a system of large and minor squares, serpentine streets, alleys and irregular urban blocks, highly exceptional for Latin American colonial towns located in plain territories,” according to UNESCO.

One of Camaguey’s nicknames is the “city of churches,” and the view shown on the stamp includes the Sacred Heart of Jesus Cathedral, built in 1748.

The fortress was added to the World Heritage list in 1997, and UNESCO said, “This intricate complex of forts, magazines, bastions and batteries is the most complete, best-preserved example of Spanish-American military architecture, based on Italian and Renaissance design principles.”

Sergio Baradat of the United Nations designed the stamps, using Alamay stock photographs of the sites.

Each design shows the photo in an oval surrounded by a decorative frame with gold foil accents.

The quantities printed of the prestige booklets are 6,500 of the UNPA/New York booklet; 7,000 of the Geneva booklet; and 10,000 of the Vienna booklet.