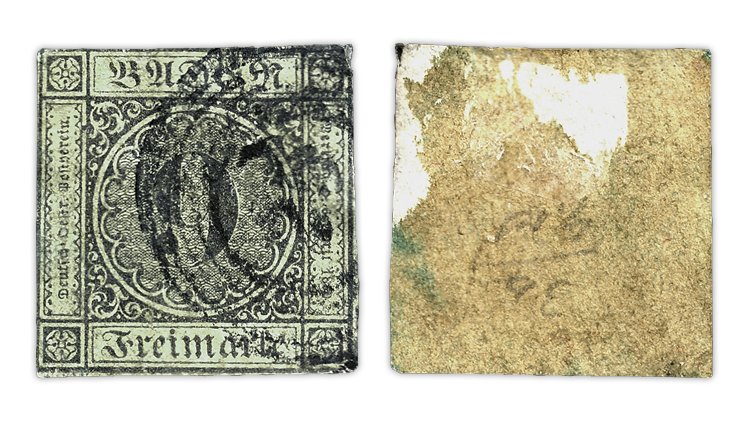 This previously unreported example of Baden’s rare 1851 9-kreuzer black stamp printed in error on blue green paper was discovered last year in a family stamp collection in the United States. It is only the fifth example of the error known.

A family of four famous European stamp errors just expanded by one.

A longtime stamp collector in the United States has revealed that he discovered a top rarity from the old German state of Baden neatly mounted on an album page in his worldwide collection.

It is only the fifth example of the error stamp ever recorded.

The 9-kreuzer black stamp, printed on blue green paper rather than the intended rose paper (Germany-Baden Scott 4b), is such a prominent rarity that a photograph of an unused example is published in both the Scott Standard Postage Stamp Catalogue and the Scott Classic Specialized Catalogue of Stamps and Covers 1840-1940.

The 2019 Scott catalogs list the value for the error stamp at $1.3 million.

The lucky sharp-eyed collector, who grew up in the Chicago area and still lives in the Midwest, spotted the postmarked stamp on an album page that has been in his family for years.

It’s likely the 168-year-old error was first obtained by his grandmother, who traveled the world as a young woman with her sisters in the years following World War I and sometimes picked up artifacts along the way.

As a youngster, the collector (who asked not to be identified) worked with his mother on her worldwide collection, and he suspects that his grandmother simply passed the stamp along to them as part of a larger accumulation of stamps from Germany, France and related areas.

No one was aware that there was a hidden gem among the stamps just waiting to be discovered.

The collection sat dormant for a few years. When his mother passed away some 15 years ago, he inherited the collection and began working on filling in some of the spaces, going alphabetically, beginning with countries that start with “A.”

He found the Baden error stamp when he got to “G” for Germany. It was affixed to the album page in a Crystal brand stamp mount.

He learned that expertly forged examples of the rarity have been found in the past, but he figured it was worth finding out if the odd stamp in his collection was genuine or a a carefully crafted fake.

After researching his options and reaching out to various stamp authorities, he contacted Sergio Sismondo, the respected international stamp expertizer and longtime Scott catalog contributor. They met at the 2018 American Philatelic Society Stampshow in Columbus, Ohio, where Sismondo took possession of the stamp.

“About five weeks went by,” the collector told Linn’s Stamp News. “He called me on a Sunday afternoon, and my wife was in the car with me.”

After putting Sismondo’s call on speaker phone, he heard the expert say, “I think you have the real thing here — this is not a forgery.”

The collector said his jaw dropped, and he had to pull over to the side of the road.

Sismondo describes his examination of the stamp in a detailed report that includes an explanation of variations in the paper color.

Sismondo wrote that the blue green paper has changed to yellowish green, “in the same manner as the unused example of this same error stamp did.” Sismondo previously examined the unused error.

Spots of blue green paper visible on the reverse of both of these stamps appear to show the original paper color.

Comparisons of the small ornaments of the stamp and a secret engraver’s mark in the design all match the elements of genuine 9kr stamps.

Sismondo notes that there are two thins on the reverse of the submitted error stamp and a fault in the upper right corner where a small wedge of paper is separating.

The used stamp is canceled with a four-ring numeral 25 postmark corresponding to the post office of Constantz, according to Sismondo.

If the letter to Karlsruhe sounds familiar, it should. It was pictured on page 1 of last week’s Linn’s Stamp News (June 3). It is being offered by the Global Philatelic Network in a June 1 public auction taking place at the Stockholmia 2019 stamp show and exhibition.

Now that it’s been identified as the 1851 error, the newest Baden stamp find is not going to remain in the finder’s collection for long.

It too will be offered in Stockholm, in a private treaty sale by Daniel F. Kelleher Auctions of Danbury, Conn., according to the collector.

The Stockholmia 2019 stamp show and exhibition is taking place May 29-June 3 at the Waterfront Congress Center in Stockholm.