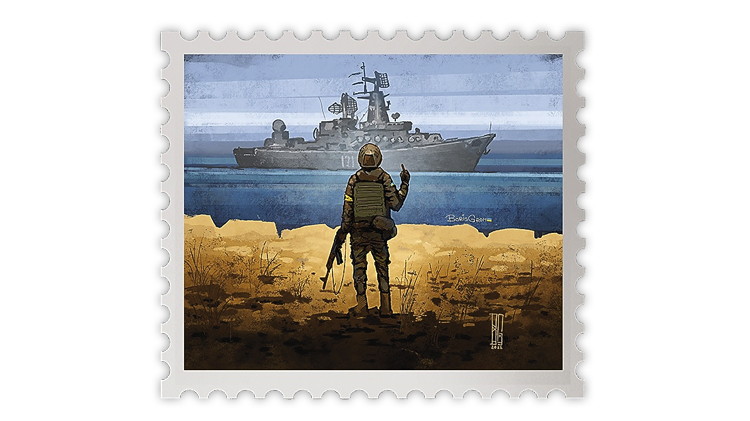 Artist Boris Groh won Ukraine’s contest to design a stamp in response to the Russian invasion.

Specifically, the theme of the contest was “Russian warship go f--- yourself,” the defiant response of the Ukrainian defenders of Snake Island when they were asked to surrender by someone aboard one of the two Russian warships that attacked the island on Feb. 24.

Groh’s design illustrates that response by showing a soldier on the island flipping off a Russian warship.

As reported on the front page of the March 28 issue of Linn’s, Ukraine’s post office, Ukrposhta, announced the contest March 1 and received almost 500 entries by the March 4 deadline.

Ukrposhta selected the top 20 entries and displayed these images on its Facebook and Instagram pages for the public to vote on from March 8 to March 11.

Groh’s illustration received 1,756 out of the 8,000 votes cast in the poll, according to Ukrposhta’s March 12 press release announcing him as the winner.

The press release (as translated from Ukrainian) also said that “in the near future,” the illustration would be on a stamp issue, adding that Ukrainians could then buy the stamp at their local post office branches to “send to friends abroad or send a fiery ‘hello’ to the Russians.”

A professional artist, Groh lived in Crimea until the 2014 Russian invasion and annexation of the Crimean Peninsula. He then moved to Kyiv and later to Lviv, according to Ukrposhta.

More information will be available at Ukrposhta’s web shop.