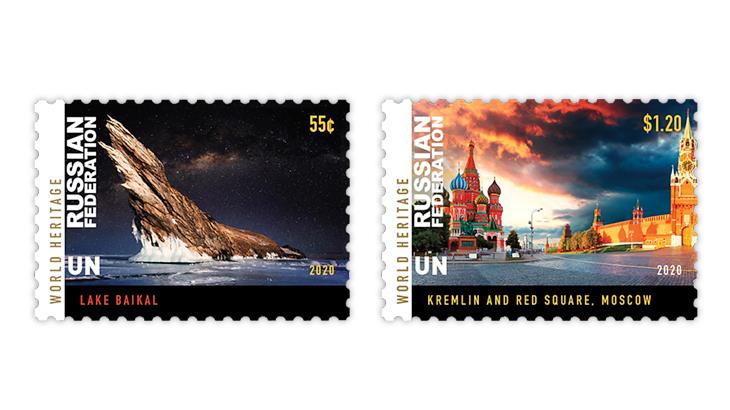 The United Nations Postal Administration issued new stamps in its World Heritage series Sept. 11. The stamps in this set honor sites in Russia. The two United States denominations for use from the U.N. headquarters in New York City feature Lake Baikal (55 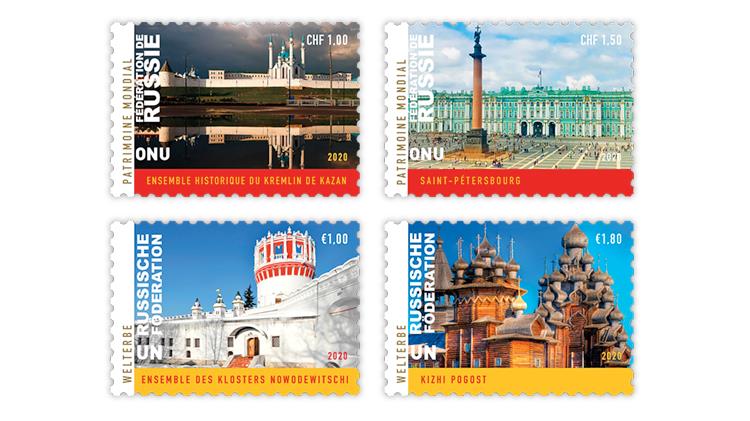 This series, which began in 1997, depicts sites that are inscribed on UNESCO’s World Heritage list. Through this list, UNESCO “seeks to encourage the identification, protection and preservation of cultural and natural heritage around the world considered to be of outstanding value to humanity.”

The six stamps and three prestige booklets in UNPA’s Russia World Heritage set were issued Sept. 11. The booklets include text and illustrations in addition to stamps.

The two stamps for use from the post office in U.N. headquarters in New York City show Lake Baikal, added to the World Heritage list in 1996, on the 55¢ denomination, and the Kremlin and Red Square in Moscow, inscribed on the list in 1990, on the $1.20 stamp.

The world’s oldest and deepest freshwater lake, Lake Baikal in Siberia is estimated to be 20 to 25 million years old and more than 5,000 feet deep.

According to UNESCO, the lake is known as the “Galapagos of Russia” because “its age and isolation have produced one of the world’s richest and most unusual freshwater faunas.”

The Kremlin and Red Square “symbolize Russia itself and have spent long centuries at the very heart of the nation,” according to an article on the National Geographic website.

That article begins: “Even those who’ve never been to Moscow recognize the colorful domes of St. Basil’s Cathedral, which sits on Red Square below the ramparts of the Kremlin. The Kremlin’s tower-studded, walled complex of domed cathedrals and palaces, which dates to 1156 but occupies a site used for far longer, was the religious center of the Russian Orthodox Church and also the residence of the tsars.”

Other cities in Russia also have a kremlin (citadel). One of these, the Kazan kremlin, is shown on the 1-franc stamp for use from the U.N. post office at the Palais des Nations in Geneva, Switzerland. The 1.50fr stamp features St. Petersburg. These sites were added to the World Heritage list in 2000 and 1990, respectively.

UNESCO described the Kazan kremlin as the “last extant Tatar fortress with traces of its original town-planning conception in Russia.” The oldest remaining building in the complex, the Annunciation Cathedral completed in 1562, can be seen on the left side of the stamp. Pictured in the center is the museum complex and the modern Kul-Sharif Mosque.

Peter the Great founded the city named after him in 1703, and it was declared the capital of Russia in 1712. The stamp shows St. Petersburg's baroque-style Winter Palace and the more than 155-foot tall Alexandar Column.

Religious buildings are featured on the two stamps for use from the post office at the Vienna International Center in Vienna, Austria.

The €1 stamp honors the Novodevichy Convent. Founded in 1524, it still serves as a cloister and originally was also a fortress. UNESCO placed it on the World Heritage list in 2004, citing it as an outstanding example of the so-called Moscow baroque style.

The 18th-century wooden churches of Kizhi Pogost are pictured on the €1.80 stamp. These churches on Kizhi Island in Lake Onega in Karelia were built without using any nails. UNESCO placed the site on the World Heritage list in 1990.

Sergio Baradat of the United Nations designed the stamps, using Alamay stock photographs of the sites. The stamps are in panes of 20. Each stamp measures 50 millimeters by 35mm and is perforated gauge 14.5 by 14.25.